Repositioning itself in the global market – The Hellenic Aerospace Industry SA

“HAI considers that strengthening its innovative level by investing in R&D and new methods is the key to repositioning itself in the global market.”

The Hellenic Aerospace Industry SA (HAI) is the leading aerospace and defence industry of Greece. Established in 1975, its major mission is to deliver services and products to the Armed Forces of the Hellenic State. By implementing an extrovert strategy during recent years, HAI has achieved to expand its customer base and establish itself as a reliable partner of the leading global aerospace industries. HAI operates with state-of-the-art production processes and highly qualified personnel, offering high performance products and quality services.

GDL: Does HAI fully cover the maintenance requirements of the Hellenic Armed Forces?

GF: HAI is a pillar in the Hellenic Armed Forces and national defence support and a lever for national economic growth.

GDL: What are the major investment plans for EAB?

GF: I would categorise them as follows:

The Hellenic Aerospace Industry has accumulated expertise and know-how in multilateral fields of activities  – in engineering and design in particular –  by participating in major European and international projects and consortiums such as nEUROn – the Unmanned Combat Air Vehicle elaborated within the framework of a European cooperation scheme. In this project, HAI participated with the Design of Aft Fuselage using stealth technologies and the Exhaust Pipe Production.

ΗΑΙ considers that strengthening its innovative level by investing in R&D and new methods is the key to reposition itself in the global market.

Within this context, a plan will be implemented for infrastructure which will upgrade and improve production processes.

A new Paint Stripping Hangar and a Special Processes Facility will perform production activities by using cutting-edge technologies, environmentally friendly, thus, materialising one of the company’s strategic goals for the modernisation and creation of new facilities according to the EU bio-environmental requirements (REACH).

HAI operates an EASA Part-147 Maintenance Training Organisation, having been approved to conduct training and examinations, meeting the requirements of EASA Part 66 Aircraft Maintenance Licence in all currently available categories.

Α milestone for HAI’s Training is the enduring cooperation with the United Arab Emirates Armed Forces. Being always responsive to the specific needs of the UAE Customer has given HAI invaluable experience, which in turn grants prominence to the organisation as a Training Centre Service Provider overseas.

To cover a broader spectrum of training services, HAI is planning to create a new Training Centre.

“To cover a broader spectrum of training services, HAI is planning to create a new Training Centre.”

GDL: Could EAB expand its maintenance and manufacturing business in the civil sector?

GF: HAI already has some activity in the civil sector, serving the Hellenic Government’s VIP aircraft.

At this point we would like to mention our contribution during the fire-fighting season in our country. HAI totally supports the CL-215 and CL-415 fleet performing their annual maintenance and providing extensive field support, during the fire hazard season.

GDL: What are EAB’s major development plans in the electronic and manufacturing areas?

GF: These can be described as follows:

This is emphasised by the long-term, continuous cooperation with Lockheed Martin, the most valuable strategic partner of HAI as the establishment of infrastructure and technology transfer provided new manufacturing capabilities for aerospace material and aircraft upgrades.

GDL: The Randstad Employer Brand Research recently revealed the top 10 best companies to work for in Greece for 2020. One of them is HAI. Can you tell us more about this achievement?

GF: According to the most recent research, for the first time the Hellenic Aerospace Industry holds the second place, entering the top ten of best Greek companies to work for.

Statistics indicated a positive image of the company, which has also been reflected on the number of job applications accepted during the recent hiring process.

Our personnel are undoubtedly the most significant asset for our company, especially in view of our new workload. Retaining highly-experienced personnel and attracting new talented recruits is more than crucial. 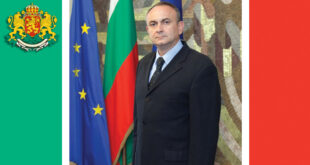 Article by the Bulgarian Ambassador on his country’s National Day