Greek Minister of Foreign Affairs meets with leadership in Cairo 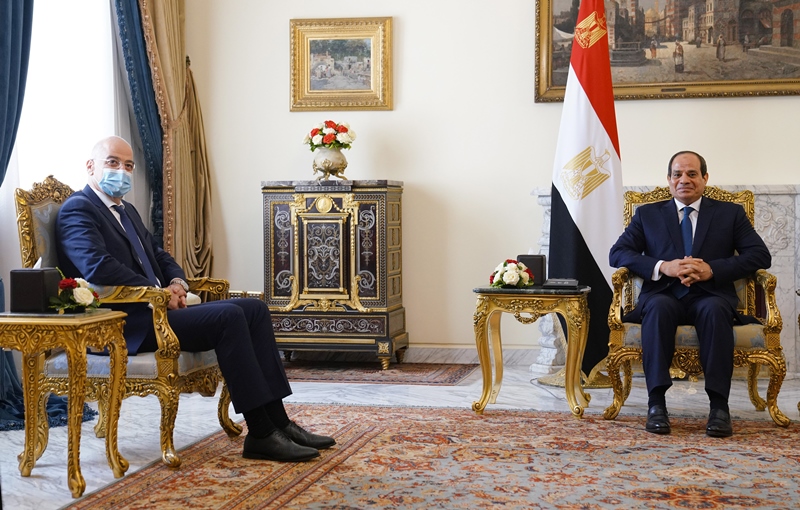 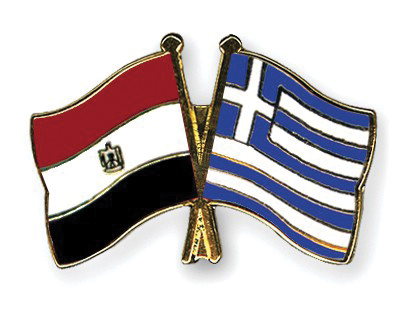 Minister of Foreign Affairs Nikos Dendias travelled to Egypt on June 18th, where he was received by the President of Egypt, Abdel Fattah el-Sisi. He then met with the Egyptian Minister of Foreign Affairs, Sameh Shoukry, with whom he discussed bilateral and regional issues, with emphasis on delimitation of maritime zones and developments in Libya and the wider Eastern Mediterranean region.

In his statement following his visit to Egypt, Minister Dendias said that, “I had the honour of being received by the President of Egypt to whom I conveyed warm greetings from the Prime Minister of Greece, Kyriakos Mitsotakis. I also conveyed to him our country’s determination to strengthen our ties of friendship and cooperation with Egypt. Immediately afterwards, I had long talks with my close friend the Egyptian Minister of Foreign Affairs. We discussed regional issues, developments in the Eastern Mediterranean, Libya, Turkey’s provocations. Finally, we resumed our negotiations on an agreement on the economic zones between Greece and Egypt.” 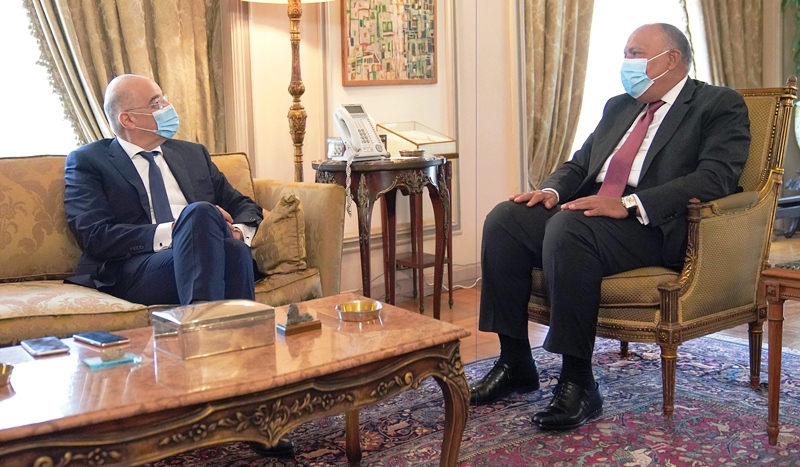 On the meeting’s sidelines, the two countries held the 12th round of technical negotiations on delimiting maritime borders between Egypt and Greece, as announced by the Egyptian Foreign Ministry Spokesperson. The two Ministers also exchanged views on the overall situation and ways of dealing with developments in the region, the most important of which is the situation in Libya.

Minister Shoukry reaffirmed the importance of working towards supporting the recently launched Cairo Declaration, an Egyptian-led initiative supporting peace in Libya. The initiative was put in place to reach a comprehensive political solution for Libya that preserves its State institutions and the Libyan people’s capabilities. It also looks to establish a new stage for preserving Libya’s sovereignty and unity, security and stability, whilst guaranteeing the elimination of terrorism and extremism.

Minister Dendias expressed Greece’s gratitude over the Cairo Declaration, which they hope will be successful in settling the crisis. He also stressed a rejection of external interference and related negative influences in Libya and across the region.

The two Ministers also discussed developments in the Eastern Mediterranean region and its instability. They stressed the need for all parties to respect and implement the rules and provisions of International Law. At the same time, they also warned against the consequences of taking illegal provocative measures that increase regional tension.

During the Ministerial discussions, they also looked at ways to combat the spread of the coronavirus (Covid-19). Both sides noted the importance of the international community’s solidarity in facing the pandemic and limiting its health, economic and social repercussions. The Ministers further discussed ways to advance and develop cooperation in various fields and regional and international issues of common interest.

At the start of the meeting Minister Shoukry welcomed his Greek counterpart to Cairo, appreciating the distinguished level reached by the cooperation between Cairo and Athens on various levels. He also expressed Egypt’s aspiration to continue its development, whether at the bilateral level or as part of the tripartite cooperation mechanism with Cyprus. Minister Shoukry pointed out the priority that Egypt attaches to continuing coordination with Greece on all common issues. This would achieve the popular interests of the two countries and support regional security and safety.

On his part, Foreign Minister Dendias said that Greece highly values its historical ties with Egypt and is keen on fostering bilateral cooperation in different domains. He noted that Greece gives great importance to promoting coordination with Egypt, for being a key pillar of regional security and stability.

Regarding the Palestinian cause, Minister Shoukry asserted the necessity of resolving the Palestinian-Israeli conflict through adopting the two-State solution, warning against any unilateral steps that could threaten regional security and stability.

The top Egyptian diplomat also updated his Greek counterpart on the deadlock in negotiations between Egypt, Sudan and Ethiopia on the Grand Ethiopian Renaissance Dam over Addis Ababa’s intransigence, despite the flexibility Egypt has shown to reach a fair and balanced deal that preserves the three parties’ interests.

Minister of Foreign Affairs, Nikos Dendias, pictured in Cairo during his audience with the President of Egypt, Abdel Fattah el-Sisi; in discussion with his Egyptian counterpart, Sameh Shoukry.