“PAM consolidates its unique role of Parliamentary Forum for dialogue and action, gathering more than 240 delegates from the Euro-Mediterranean and Gulf regions.”

The 14th Plenary Session of the Parliamentary Assembly of the Mediterranean (PAM) took place in Athens late last month, generously hosted by the Hellenic Parliament.

In his address President Tassoulas noted that, “we are living in difficult times. The issues that concern our Assembly are not just regional, local. They are primarily global issues of our time. The fight against terrorism, managing the massive migration flows, climate change and the respect of human rights are the big global issues of our time. It is extremely unpleasant that our region is rife with hatred and passions…

“Climate change is a vital challenge, an existential threat to humanity. If we don’t address it directly, if we don’t protect our natural environment, we will be deprived of the framework in which we have been constructing the myth of our lives, considering it a given and unassailable…

“Also, the recent developments in the wider region are just cause for concern. From this platform, I would like to stress that Greece remains fully committed to the principle of good neighbourly relations with all of its neighbours. However, there can be no tangible progress in the relations between neighbouring countries, without the full respect of International Law, including the International Law of the Sea, as well as the International Conventions…

“In the era of the fourth industrial revolution, the people of the Mediterranean cannot remain stuck in the past. We are already in the next stage of evolution. It is our responsibility to insist οn cooperation; the challenges of the 21st Century are global by nature and cannot be resolved by one nation alone. As political beings, we ought to defend and safeguard our principles and values of liberal democracy, of the Rule of Law and of human rights.

“We need to organise an international legitimacy that can be implemented, we need to protect human nature from the threats of technology and biotechnology… and adjust our legal and educational systems to the new conditions, contribute to reducing inequality, fight poverty and exclusion, protect nature and the environment, which is not as inexhaustible as we used to think.”

The hosts opened the works highlighting the unique mission of the Assembly in the current Mediterranean political context, namely developments in the MENA region, the evolving threat of terrorism, challenges to sustainable economy and fight against climate change, the status of human rights and mass migration governance.

UN Secretary General Antonio Guterres addressed a special message to the Assembly calling upon PAM’s key role in keeping Governments accountable and enacting legislation to promote peace and security, sustainable development and a fair globalisation for all.

In Athens the national delegates debated political instability in the MENA region and analysed the current challenges in critical hotspots, including on-going conflicts in Libya and Syria, the increasing instability in the Sahel, the stall of negotiations between Israel and Palestine, as well as the water crisis along the Nile basin and the financial emergency in Lebanon.

Delegates reasserted their full commitment to promote political solutions to these conflicts and for achieving the Two State solution in the Middle East utilising all the tools of Parliamentary Diplomacy.

On the outbreak of the coronavirus pandemic, Special Representative of the Director General of the World Health Organisation Dr. Trias, provided PAM delegates with an updated and tailored briefing about the present level of hazard and the contribution required by parliamentarians in ensuring a proper support to national health authorities.

With an eye to socio-economic challenges and sustainable development, the Plenary Session also discussed the strategic role of SMEs and start-ups in the Euro-Mediterranean region, the need for regional economic integration and the access by enterprises to alternative capital markets through new and flexible legislations. The ‘Start-up Market Project’, launched by PAM in December 2019, was highlighted as a concrete answer to this necessity, by bringing together start-uppers and investors through a better structured ‘capital calls’ initiative.

Delegates further praised the strengthened PAM partnership with the OECD, World Bank, IMF, UNCTAD and other IFIs, which will allow a new comprehensive parliamentary approach to the specificities of the Mediterranean region’s economy. 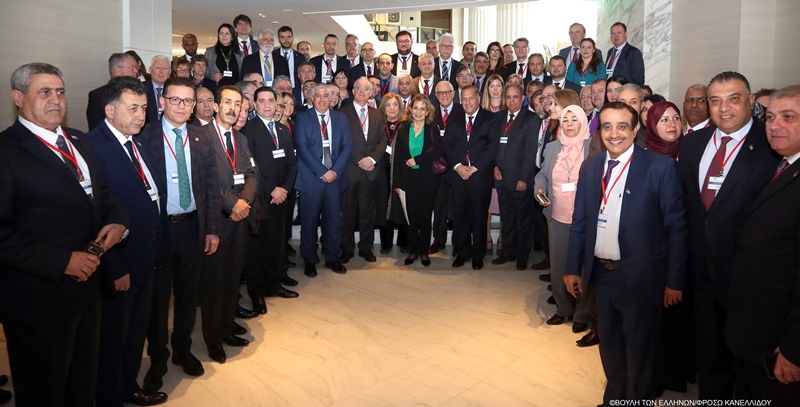 Parliamentarians reaffirmed their oversight mandate in ensuring that governments effectively deal with climate change. Converting to a new sustainable eco-friendly economy, a more efficient waste management system and adding funds and investments for environmental sustainability, were just some of the measures agreed upon by the delegates, and which will be brought up for further discussions in their capitals.

The Athens general debate was dedicated to Migration and Human Rights. In restating their commitment to promoting and protecting human rights, delegates pledged to support the creation of a better tailored mechanism to provide all kinds of migrants with basic needs and services, while respecting national laws in countries of origin, transit and destination.

Parliamentarians also called upon the international community and the EU to address the root causes of migration and to enhance economic development to avoid further instability, which forces people to flee from their homeland in search for better economic opportunities or protection.

The annual PAM Prize was awarded to 13 individuals and institutions, from different parts of the Euro-Mediterranean region, which operated in favour of peace, stability, humanity and prosperity for the peoples of the Mediterranean in the spirit of PAM’s mandate.

The Assembly also unanimously extended the mandate of Ambassador Sergio Piazzi as the Secretary General of PAM for a new term of four years until the 19th plenary session of 2025.

The session ended with the handover ceremony of the PAM Presidency from Alia Bouran (Jordan) to Karim Darwish (Egypt).

The 15th Plenary Session of the Assembly will be graciously hosted by the Italian Parliament and the Sardinia Region in Cagliari, February 2021.