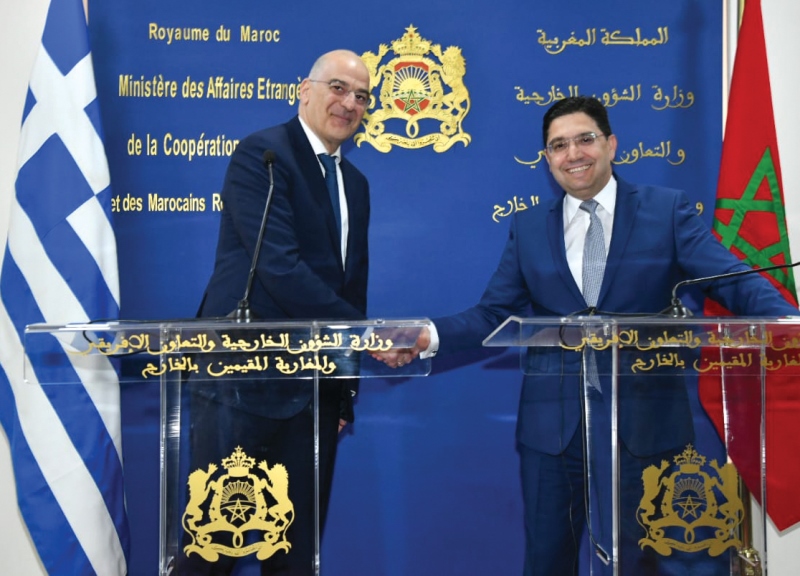 “The only tangible result for Libyans after all these efforts is the Skhirat Agreement.”

Greek Foreign Minister Nikos Dendias highlights, on January 16th in Rabat, the “great effort” that the Kingdom of Morocco has made to resolve the conflict in Libya.

“The only tangible result for Libyans after all these efforts is the Skhirat Agreement,” said Minister Dendias in a joint press briefing with Minister of Foreign Affairs, African Cooperation and Moroccan Expatriates Nasser Bourita. The Skhirat Agreement refers to a comprehensive political agreement to resolve the conflict in Libya. Libya’s rival factions signed the peace agreement in Skhirat, Morocco on December 17th 2015. The Greek Minister said he was surprised that neither Greece nor Morocco had been invited to the international conference on the situation in Libya, held in Berlin on January 19th, after the failure of the Moscow meeting. He further described as “null and void” the two agreements signed between the Government of Tripoli and Turkey, because they are “in flagrant violation of the Skhirat Agreement”. These agreements “do not serve peace and stability in the region and they do not serve the interests of the Libyan people,” said Minister Dendias, noting that this is Greece’s “clear position”, which it shares with the European Council and the US Department of State.

Minister Bourita reiterated Morocco’s stance during the joint press conference, emphasising that military interference undermines the international efforts aimed at settling the crisis. He further lamented the exploitation of the Libyan people in the conflict, arguing that some parties on the ground are working in favour of foreign agendas that have nothing to do with regional stability and peace, nor the interests of the Libyan people. 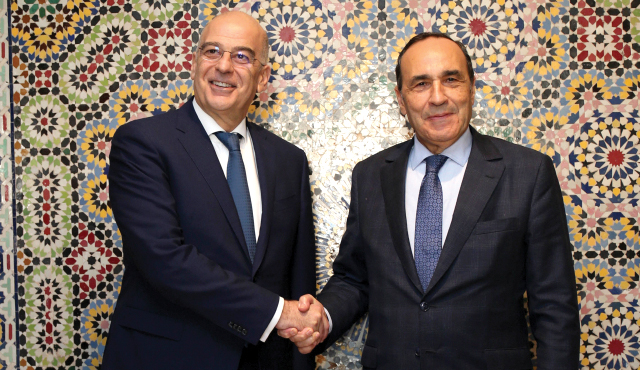 As an outcome of the diplomatic meeting, the two Ministers agreed to coordinate positions on the Libyan crisis. We will work together “to achieve a political solution based on the Skhirat Agreement, which so far remains the only successful diplomatic experience in dealing with the Libyan issue,” Minister Bourita declared. In addition to his remarks on the Skhirat Agreement, Minister Dendias commended King Mohammed VI’s development model and highlighted the role of Morocco as a beacon of peace and stability in the region and throughout Africa.

Speaker of the House of Representatives of Morocco Habib El Malki also held talks with Minister Dendias. On this occasion, Speaker El Malki lauded “the positive and firm relations linking the two countries,” noting that Morocco and Greece share the same values concerning defending human rights and recalling the humanitarian aspect when dealing with the immigration phenomenon. As for the cause of the Kingdom’s territorial integrity, Speaker El Malki confirmed that the artificial conflict around the Moroccan Sahara goes back to the Cold War and impedes the aspirations of the region’s peoples toward unity and integrity. He also recalled the initiative of HM King Mohammed VI regarding opening dialogue channels with neighbouring countries without preconditions, to settle the issues that hinder the development of bilateral relations and the construction of a Maghreb Union.

Foreign Minister Dendias noted that Greece “supports the efforts of the United Nations aimed at reaching a just, realistic, lasting and mutually acceptable solution” to the question of the Sahara following the relevant UN Resolutions.

The two parties were also said to have exchanged views on numerous issues relating to regional conjuncture and the means to enhance cooperation and coordinate the views of both countries on issues of common interest.