Visit of the Foreign Minister of Bangladesh – Memorandum of Understanding signed 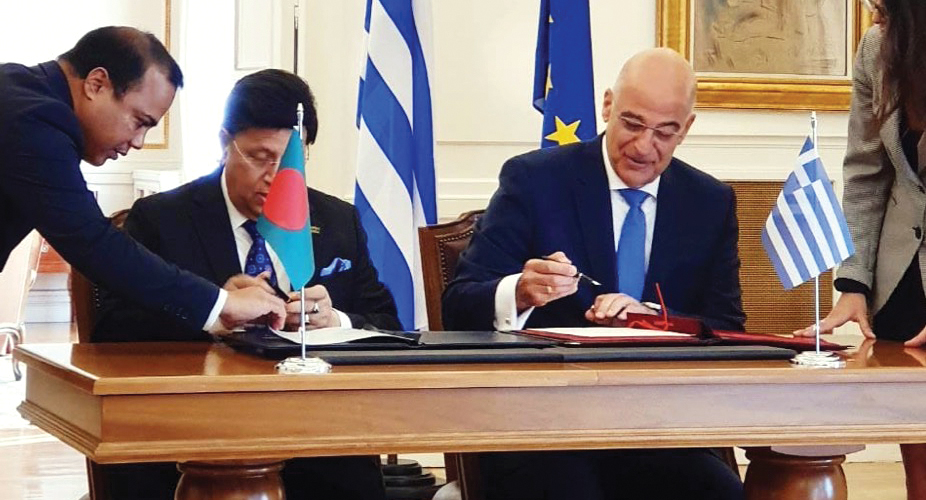 Visiting Minister of Foreign Affairs of Bangladesh Dr. Abul Kalam Abdul Momen and his Greek counterpart, Foreign Minister Nikos Dendias sign the Memorandum of Understanding between the two Foreign Ministries on cooperation in the area of diplomatic training.

Greece has briefed Bangladesh on current developments concerning the European Union, as well as issues of concern to their region, the Mediterranean, the Western Balkans and migration. “The Greek Government is working hard and taking specific measures to expedite procedures that will allow for an increase in the number of returns within the context of the relevant EU – Turkey joint statement,” said Foreign Minister Dendias following his meeting with his Bangladesh counterpart.

They, in the presence of Alternate Minister of Citizen’s Protection Koumoutsakos, exchanged views on issues that concern the major concern of migration. The Greek Foreign Minister stressed that returns will continue taking place in “absolute compliance” with International Law and in accordance with the “strong sentiment of humanism and responsibility” which characterises both the Greek State apparatus and society. This attitude of responsibility has been acknowledged at international level and is absolutely non-negotiable, he said. “This attitude should serve as a moral compass to those who insist on capitalising on human pain in the service of their own interests. I call upon them to leave this policy behind and honour their international commitments,” he added.

More importantly, though, said the Greek Head of Diplomacy, that the meeting was the ideal trigger to renew bilateral relations between Bangladesh and Greece adding that the Memorandum of Understanding signed between the two Foreign Ministries on cooperation in the area of diplomatic training, constitutes a concrete step in this direction. “During our discussion, we also outlined the potential for mutual support between Greece and Bangladesh in regard to various issues,” he said.

Within the context of efforts to broaden economic and trade relations, Minister Momen expressed his country’s readiness to step up cooperation on all fronts. Minister Dendias also accepted his invitation to visit Bangladesh soon, heading a group of Greek entrepreneurs. “It is my expectation that this will carry over to a number of other fields, such as culture and education. I also expressed Greece’s readiness for exchange of know-how with Bangladesh in all areas of mutual interest,” said Minister Dendias. 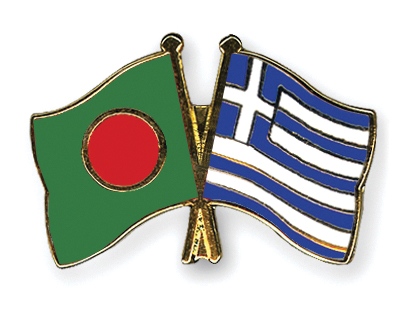 The two Foreign Ministers also discussed regional and global issues, reiterating their commitment to strengthen cooperation in the UN and other international organisations on issues like climate change, migration and supporting each other in different international bodies where they share common views and positions. Foreign Minister Momen within this context highlighted the role of Bangladesh in global peacekeeping and peacebuilding and the Culture of Peace promoted by Bangladesh.

The Greek Foreign Minister praised the Bangladesh Government for showing an extraordinary humane attitude while dealing with the Rohingya crisis and assured of support as an individual State and as a Member of the EU in resolving the issue peacefully. He also informed Minister Momen about the Greek Premier’s initiative for the protection of cultural heritage threatened by climate change and asked for the participation of Bangladesh.

Minister Momen has invited Greek companies to invest in Bangladesh considering Dhaka’s lucrative business packages made for attracting more Foreign Direct Investment. He made this call when he attended a business forum entitled ‘Bangladesh: Greece, Business Opportunities’ hosted by the Athens Chamber of Commerce and Industry, in collaboration with Bangladesh Embassy in Athens. He flagged the attractive investment package, infrastructure and the political stability in Bangladesh as some of the key points to consider for taking investment decision. The Foreign Minister further pointed out that with the investment packages offered by Bangladesh, investors can expect to make profits and at the same time create employment opportunities in Bangladesh, thus have the win-win scenario.