Two distinguished Ambassadors that have diligently served their country have recently been awarded for their efforts: Ambassador Petros Panayiotopoulos, who recently served as the Greek Ambassador to Mexico, was decorated with the Order of the Aztec Eagle, the highest Order awarded to foreigners. The ceremony was hosted by the Ambassador of Mexico, Daniel Hernández-Joseph, who congratulated and thanked Ambassador Panayiotopoulos for deepening relations between Mexico and Greece, praising the valuable work that he has done by acting, assisting and influencing in a most positive way toward cooperation between the two countries. 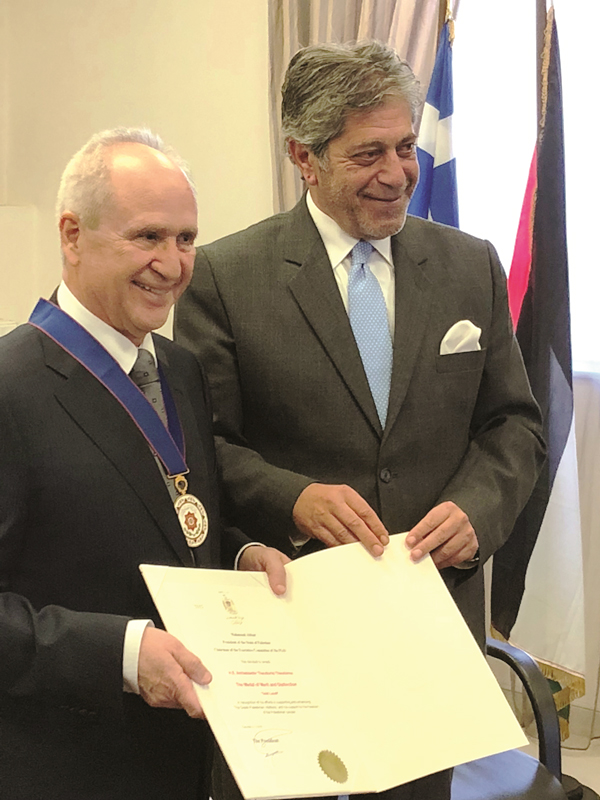 Likewise, Ambassador Theodoros Theodorou, MoFA A6 Director, was presented with the ‘Gold Medal of Merit and Distinction’ by Palestinian Ambassador, Marwan Toubassi on behalf of the President of the State of Palestine, Mahmoud Abbas, in recognition and appreciation of his support to the strengthening of Greek-Palestinian relations and support for the Freedom of the Palestinian people. In presenting the award, Ambassador Toubassi thanked Ambassador Theodorou for his important contribution to the strengthening of political economic and trade relations between the two countries.