Deputy Prime Minister and Foreign Minister of Vietnam in Athens 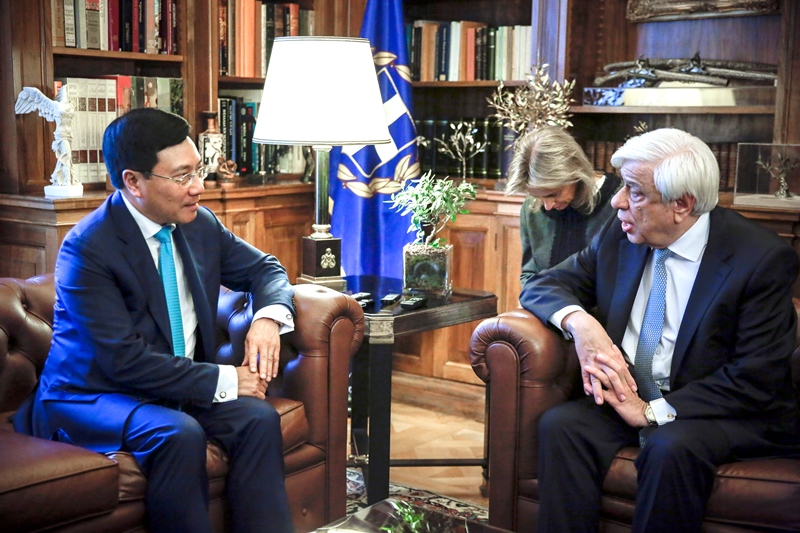 The Minister of Foreign Affairs, Nikos Kotzias, met at the Foreign Ministry on July 2nd with the Deputy Prime Minister and Minister of Foreign Affairs of Vietnam, Pham Binh Minh, who was carrying out a visit to Greece following Minister Kotzias’ visit to Hanoi last year in February. Both sides noted the fruitful bilateral friendship across several fields over the past 43 years since the two countries set up diplomatic ties. 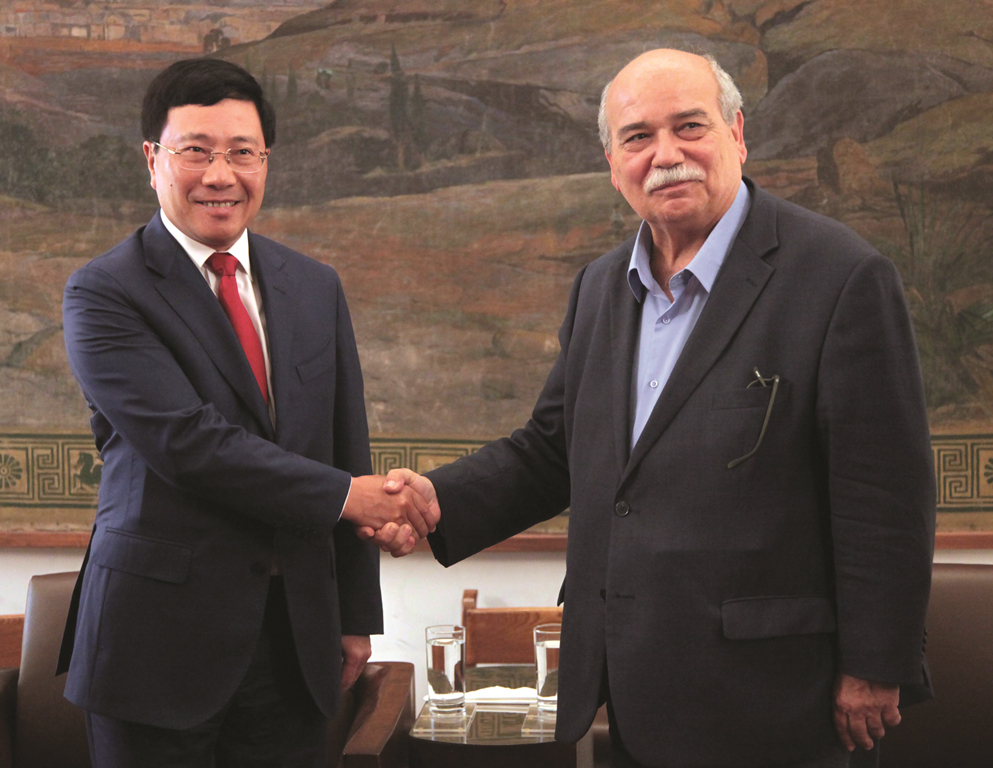 In their one-on-one meeting, the two Ministers discussed the further development of cooperation between the two countries. The talks focused on issues of regional and international interest and on the strengthening of Greek-Vietnamese bilateral relations. Emphasis was put on the sectors of trade and economy, educational and cultural cooperation and tourism and shipping. This meeting was followed by expanded talks between the two delegations and a working lunch, culminating in the signature of an agreement that abolishes the need for visas on diplomatic passports. The Vietnamese Deputy Prime Minister then extended an invitation to Prime Minister Alexis Tsipras to visit Hanoi.

The two Ministers agreed to host annual meetings in each country to collaborate on trade issues, encourage business forums in both countries (especially in the technology sector) and support each other’s bid for a seat as non-permanent member of the UN Security Council. They also made special note of bilateral cooperation to promote Vietnam’s interests in the European Union, with Minister Pham Binh Minh expressing his country’s appreciation “for Greece’s support in the formal signing and ratification of the free-trade agreement between the EU and Vietnam.” 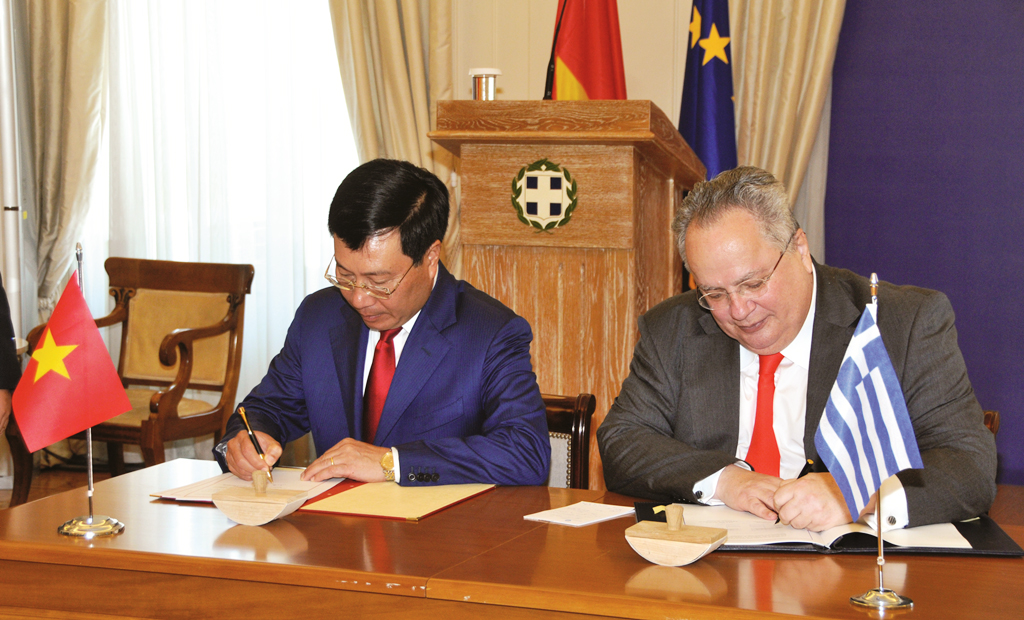 The visiting Minister also called on both Governments to “encourage and assist the business community of their countries and promote collaboration in shipping, which is a significant sector in both Vietnam and Greece.” This visit by Minister Minh and that by his Greek counterpart Nikos Kotzias in 2017 have offered good chances for both sides to review their cooperation results and put forward new orientations. The two countries have maintained the regular organisation of political consultation at senior official level and cultural and education-training exchange programmes.

In terms of economic ties, two-way trade has enjoyed growth, reaching 334 million USD in 2017, a year-on-year rise of 40%. The two nations have enhanced active cooperation and mutual support at international and regional multilateral forums such as the United Nations, ASEM and the ASEAN-EU Forum. Greece has approved the signing of the EU-Vietnam Framework Agreement on Comprehensive Partnership and Cooperation (PCA) and advocate to soon ratifying the EU-Vietnam Free Trade Agreement (EVFTA). 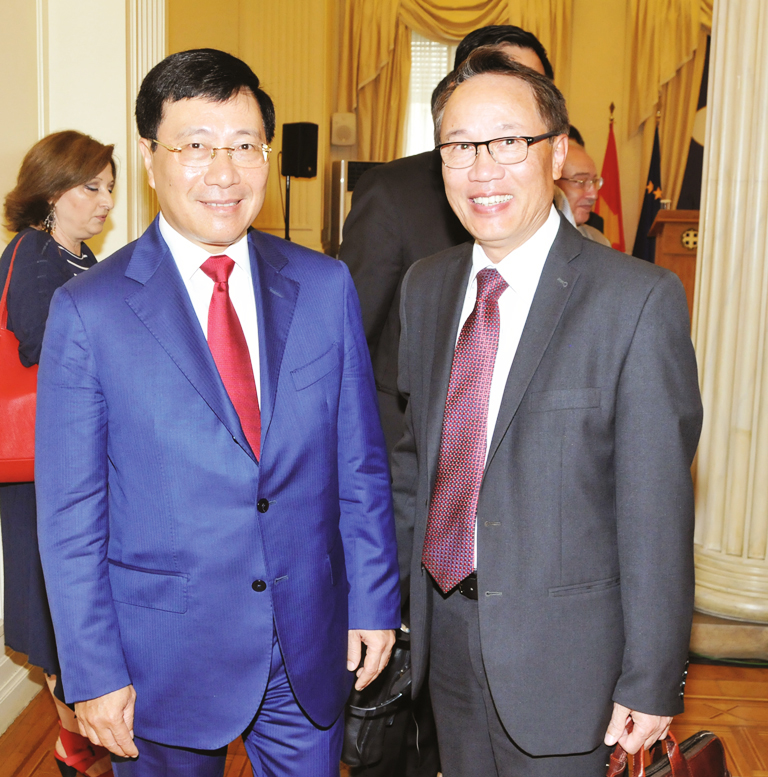 Upon meeting with the Greek Head of State, President Prokopis Pavlopoulos affirmed his support for enhancing all-round cooperation with Vietnam. He said with its location and achievements, Vietnam has played an increasingly important role in the region and the world. On regional and global issues, they both affirmed their support for the enforcement of International Law and agreed to join hands for peace and stability in the region and the world.

Minister Minh also had a meeting with Parliament Speaker Nikos Voutsis and Deputy Speaker Georgios Varemenos, who also chairs the Greece-Vietnam Parliamentary Friendship Group. The two sides said that Vietnam and Greece share many similarities in national development in history and the close friendship over the last four decades is the solid prerequisite for the countries to solidify multi-faceted cooperation in the time ahead.

During his visit, the Deputy Premier met with his Greek counterpart and Minister of Economy and Development, Giannis Dragasakis. They both suggested stepping up collaborative efforts in areas like maritime transportation and logistics, shipbuilding, seaport exploitation, tourism and agricultural product processing. The two sides agreed to create a legal framework to promote bilateral economic and trade ties, including negotiations for the signing of an agreement on double taxation avoidance, and another agreement on maritime transportation.

Pictured above from left: Deputy Prime Minister and Minister of Foreign Affairs of Vietnam, Pham Binh Minh, pictured during his meetings with President of the Hellenic Republic, Prokopis Pavlopoulos; President of the Hellenic Parliament, Nikos Voutsis; and signing an agreement with his Greek counterpart, Foreign Minister Nikos Kotzias. Below: Minister Minh and Ambassador of the Socialist Republic of Vietnam, Nguyen Manh Cuong.

Previous Interview with H.E. the Ambassador of the Republic of Indonesia, Ferry Adamhar
Next The 4th quadrilateral meeting of Greece, Bulgaria, Romania and Serbia