His Excellency the President of India pays State Visit to Greece 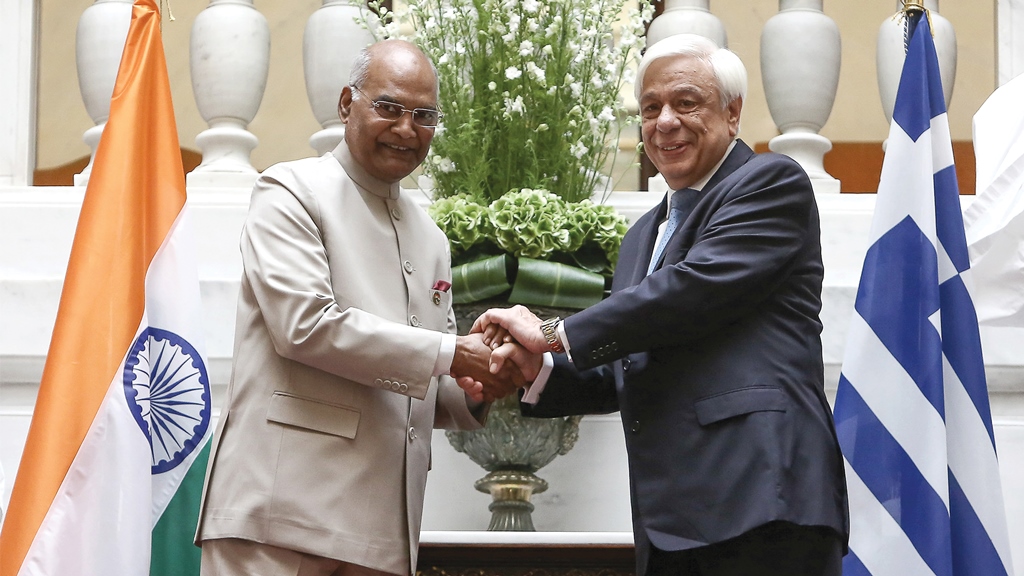 His Excellency the President of the Republic of India Ram Nath Kovind was on a State Visit to Athens on June 16th-19th for talks with Greek leaders aimed at strengthening cooperation between the two countries. President of the Hellenic Republic Prokopis Pavlopoulos welcomed President Kovind at the Presidential Mansion, where he was accorded a ceremonial welcome prior to the meeting.

India, like Greece, has assumed initiatives that contribute to regional stability and development, President Pavlopoulos said at a dinner in honour of his visiting Indian counterpart. At the Presidential Mansion, President Pavlopoulos drew comparisons between the two countries in their respect of International Law, especially maritime law, and in their principle of seeking a peaceful resolution to conflicts. 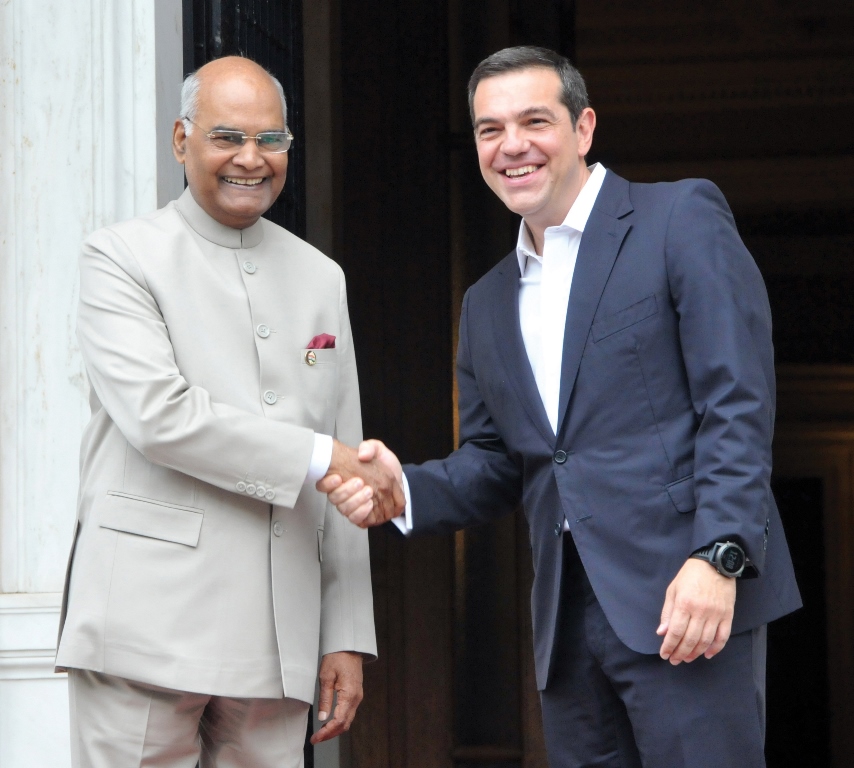 Despite the geographic distance between the two countries, he said, India feels very familiar to Greeks, as relationships between the two peoples go far back into history. Today, Greece hails the achievements of the Indian economy, especially in communications, new technologies, energy, infrastructure and space technology, and also welcomes India’s decision to accept the Greek invitation to become the ‘Honoured Country’ 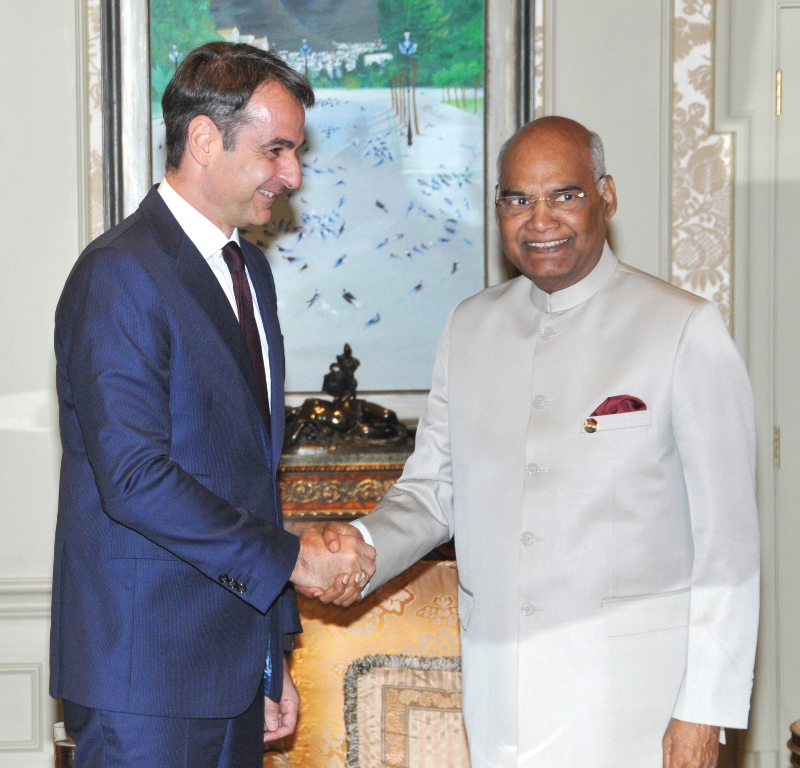 in the Thessaloniki International Fair of 2019.

During his meeting with the Greek President and the delegation level talks, President Kovind emphasised the age-old civilizational ties between the two nations. He said that India and Greece shared values of democracy, rule of law and multi-cultural ethos and that these have added depth to their bilateral and multilateral engagements. The President expressed that India was keen to deepen the on-going cooperation with Greece especially in the political and economic fields. 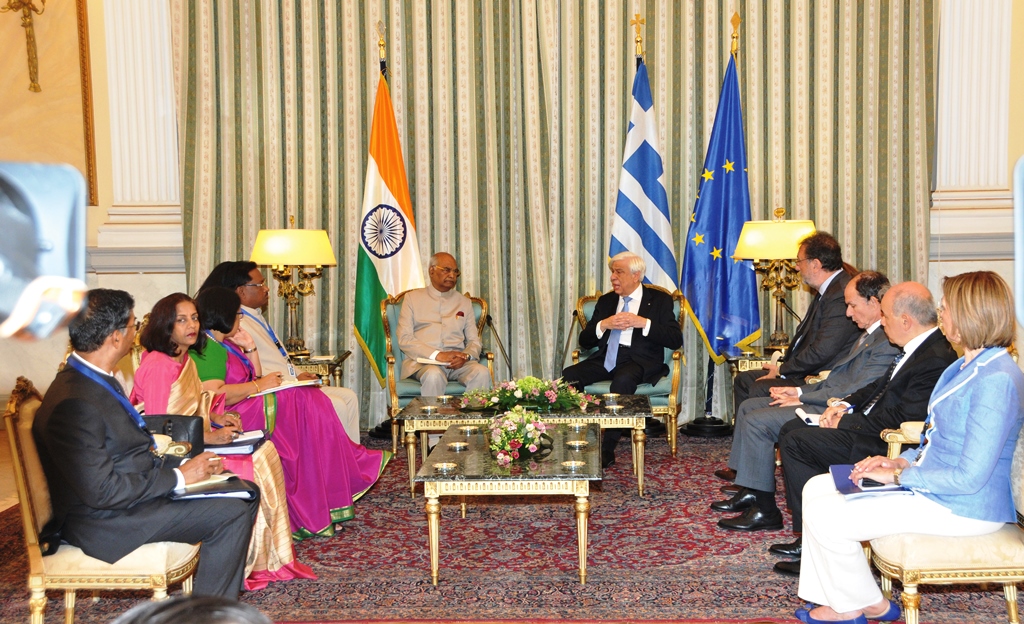 The Indian President also apprised the Greek delegation of the steps taken by India to improve the business climate in the country and said that India wished to collaborate with Greek companies to become partners in the growth story of India. In particular, India could benefit from Greek expertise in the areas of shipping, food and dairy products and tourism for example. On the other hand Indian companies, especially in the areas of pharma, IT, agriculture, real estate, infrastructure and start-ups, are keen to establish presence in Greece. India also thanked Greece for its support for the country’s candidature for a non-permanent seat in the UN Security Council and for membership to the Nuclear Suppliers Group.

On the subject of India-Greece cultural ties, the President said that as two ancient civilizations, that have interacted with each other for centuries, have a deep cultural understanding of each other. He also said that the two countries should work together to develop Greek and Indian traditional medicinal practices as healthcare options for people.

After the delegation level talks, the President also met with Prime Minister Alexis Tsipras, with the two leaders discussing different issues of mutual interest to both nations. In welcoming President Kovind to Greece, Prime Minister Tsipras noted that he had arrived at a critical time for the country, when it was exiting a long economic crisis and finally able to stand on its feet, as well as to play a leading role on the geopolitical scene. The Indian President stressed that choosing to visit Greece first during his visit to Europe reflects the long-standing friendship of the two countries and the desire to further deepen ties with Greece.

The visiting Indian Head of State also met with New Democracy (ND) party leader Kyriakos Mitsotakis, during which time there was special mention made of the friendship between the two peoples, with the main opposition leader also expressing his intention to upgrade relations between the two countries in trade, tourism, investments, shipping, informatics and agriculture. Collaboration in defence and in dealing with international terrorism should also be expanded upon Mr. Mitsotakis said.

During the day, three Memorandums of Understanding (MoUs) were signed: (i) an MoU between the Bureau of Indian Standards (BIS) and the National Quality Infrastructure System/Hellenic Organisation for Standardisation on Cooperation in the Fields of Standardisation; (ii) MoU between the Foreign Service Institute (FSI) of India and the Hellenic Diplomatic Academy on Cooperation in Diplomatic Training; and (iii) the Programme of Cultural Cooperation for the period 2018-2020.

Later in the evening, the President laid a wreath at the Phaleron Indian Cremation Memorial where the remains of the 74 soldiers of undivided India who sacrificed their lives during World War II were laid to rest. The President also attended a State Banquet hosted by the President of Greece. At another event organised by ELIAMEP, President Kovind addressed a gathering of diplomats, policymakers and academics on the subject ‘India and Europe in a Changing World’. The President said that India is committed to world peace, noting that it sees peace not just as the absence of conflict, but as a reflection of sustainable development and indeed of any effort that anticipates and prevents strife and suffering.

Addressing a Greece-India Business Forum organised by the Indian Embassy in Greece in cooperation with Enterprise Greece, the President of India said that Indian business representatives can find the right partners in Greece in the sector of tourism, as India expects to have substantial growth by 2022, adding that start-up companies from India and Greece could seek partnership opportunities in agricultural production, farm product processing, shipping, tourism, pharmaceuticals, energy, entertainment, metals, production and selling of food and beverages, clothing and footwear.

Upon President Kovind’s arrival in Greece, an event was organised by the Ambassador of India in Athens, Shamma Jain. Addressing his audience, the Indian Head of State said that Greece and India are ancient civilizations having old and deep relations and that both nations greatly respect the democratic values followed by each other. Addressing the diaspora, President Kovind said India was striving to become a USD 5 trillion economy and the world’s third largest consumer market by 2025, as he highlighted investment opportunities in the country. He also praised overseas Indians for playing an important role in improving bilateral relations. He further emphasised India’s deep respect for the age old civilization of Greece, noting that he had tremendously enjoyed his visits to the Acropolis, as well as to the Panathenaic Olympic Stadium, the Temple of Zeus and the Poseidon Temple in Sounio.

Picture from above: a Presidential welcome for the visiting Indian Head of State, Ram Nath Kovind, by his Greek counterpart, Prokopis Pavlopoulos. President Kovind pictured during his meetings with Prime Minister Alexis Tsipras. With main opposition New Democracy party leader Kyriakos Mitsotakis. The two delegations in conference at the Presidential Mansion. Scene during the Greece-India Business Forum organised by the Indian Embassy in Greece in cooperation with Enterprise Greece. President and Mrs. Vlassia Pavlopoulou-Peltsemi and President and Mrs. Savita Kovind pose for a photo before the State Dinner held in honour of the visiting Presidential couple. A sombre moment as President Kovind pays his respects to 74 fallen Indian soldiers at the Phaleron Indian Cremation Memorial. A photo opportunity for President and Mrs. Kovind in front of the Temple of Poseidon in Sounio.