The 2nd Ministerial ‘Visegrad 4 plus Balkan 4 plus’ Meeting

“We want a more united EU, which is more democratic and socially just. An EU that is stronger in the world and cares for its citizens”

Foreign Ministers of the Visegrad Group and Balkan EU Member States reiterated their commitment to deepen cooperation to address common challenges during a meeting at a seaside resort in Sounio. The delegates also had the opportunity to visit Cape Sounio where they admired the impressive Temple of Poseidon and the breath-taking views.

Upon the initiative of Minister of Foreign Affairs Nikos Kotzias, the Ministers of Hungary, the Czech Republic, Slovakia and Poland – which form the Visegrad Group – along with the four Balkan countries which are already EU Members Greece, Bulgaria, Romania and Croatia, convened  together with Western Balkan EU candidate countries, Albania, the Former Yugoslav Republic of Macedonia, Montenegro and Bosnia and Herzegovina, as well as Slovenia and Cyprus who were also invited to participate in the meeting as observers.

The discussions, enriched by the participation of distinguished academics and parliamentary representatives, focused on the Future of Europe, Enlargement and Energy.

The second ministerial meeting of the so-called ‘Visegrad 4 plus Balkan 4 plus’ dialogue platform ended with delegates expressing their willingness to work together to resolve pending issues, face future challenges and strengthen their voice regarding EU enlargement.

Foreign Minister Nikos Kotzias noted a need to work on a new justification for the European Union, providing a vision and reforming its institutional systems.

In a changing world, Europe should be empowered to better serve its citizens, giving answers to real problems and crises, the Greek Foreign Minister and many of his counterparts said addressing the one-day event.

Concerning the EU’s global role, the Greek Minister stressed that the EU should not insist on memoranda, sanctions and measures – such as embargoes – against third parties. “We had a very fruitful discussion exchanging views and ideas. We talked openly and honestly,” Minister Kotzias said during a press conference at the end of the meeting.

“It is a vital interest of the EU to accelerate enlargement. The more we are, the stronger we are,” said the Minister of Foreign Affairs of Hungary, Peter Szijjarto, the country which currently holds the rotating Presidency of the Visegrad Group. Referring to migration, an issue which has caused rifts within Europe in recent years, he underlined that the position of the Member States of the Visegrad Group is clear; “We must not encourage migration. We must stop migration,” he stressed. 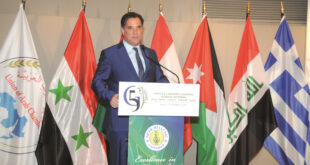