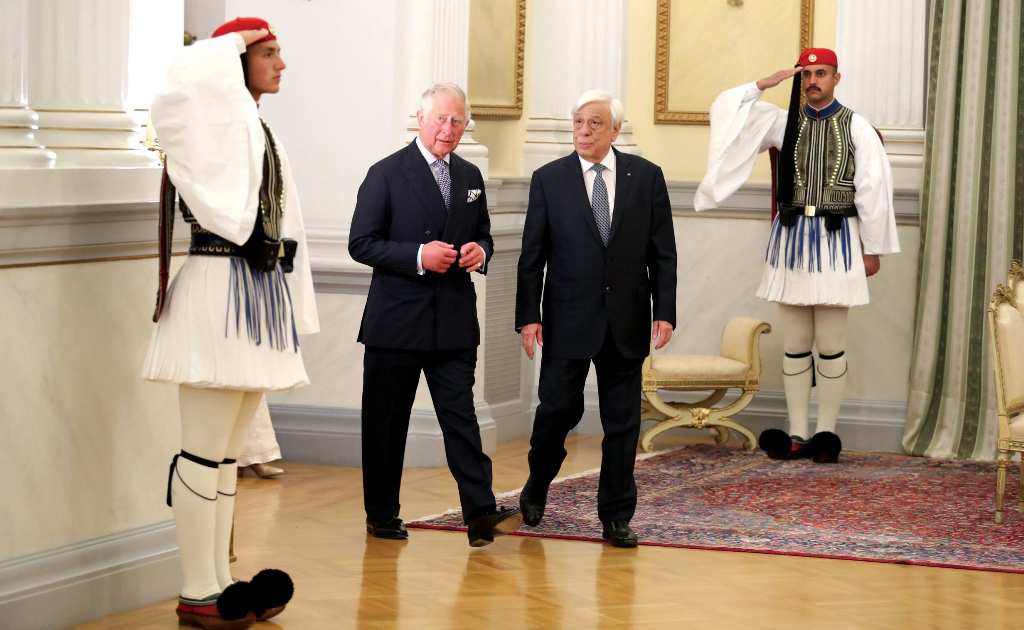 His Royal Highness, Charles, the Prince of Wales and his wife Camilla, the Duchess of Cornwall, paid a three-day Official Visit to Greece from the 9th-11th May, following an invitation by the President of the Hellenic Republic, Prokopis Pavlopoulos.

The two Royal guests were received by the President and his wife, Vlassia Pavlopoulou-Peltsemi, at the Presidential Mansion, later meeting with the Prime Minister Alexis Tsipras and his wife, Betty Batziana, and the main opposition leader Kyriakos Mitsotakis, as well as with the Archbishop of Athens and All Greece, Hieronymus at the Archdiocese.

The busy schedule included laying a wreath at the Tomb of the Unknown Soldier in Constitution Square and at the Allied Cemetery of Alimos, a visit to the 11th Century Kapnikarea Church in Ermou Street, paying successive visits to HMS ‘Echo’ (British warship in NATO force) and HMC ‘Valiant’ (British port authority ship), the ‘Olympias’ a reconstruction of an ancient Athenian trireme (where he was received by the National Defence Minister Panos Kammenos), and to the historic warship ‘Averof’, of which he was given a tour and met with top navy officers and students at the Naval School. He also visited the Stavros Niarchos Foundation Cultural Centre and attended an international educational conference organised by the British Council. Their Royal Highnesses then flew to Iraklio, Crete on the last day of their visit, touring the archaeological site of Knossos. They then met with members of the British School at its facilities in the Villa Ariadni, a former residence of Sir Arthur Evans, who excavated Knossos. During their stay on the island, they also visited the Heraklion Development Company, a local community business promoting the area’s development, where they were briefed on its activities before paying a visit to a refugee community housed at the old community school. 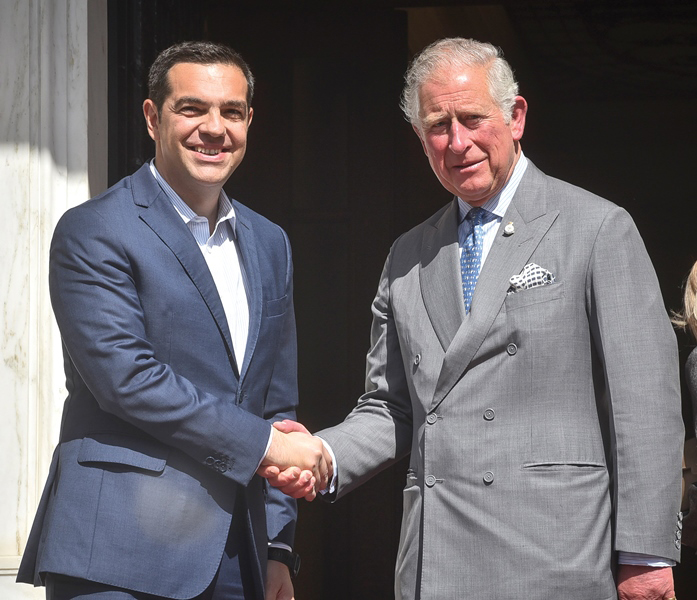 The couple’s visit to Crete concluded with a visit to Archanes village where a Cretan celebration was underway. Here they toured stalls showcasing Cretan produce, crafts, local initiatives and entrepreneurs, tasted local wine and joined the throngs in traditional dancing.

“We hope that the return of the Parthenon Sculptures will, finally, be possible,” President of the Republic Prokopis Pavlopoulos said, during his address at an official dinner at the Presidential Mansion in honour of the visiting British royals.

Citing Britain’s long tradition in classical studies, as well as the bilateral cooperation between the two countries in this area, President Pavlopoulos noted that this, and the ties of friendship between Greece and Britain, created hope that the sculptures will eventually return and that the unity of the Parthenon will be restored. 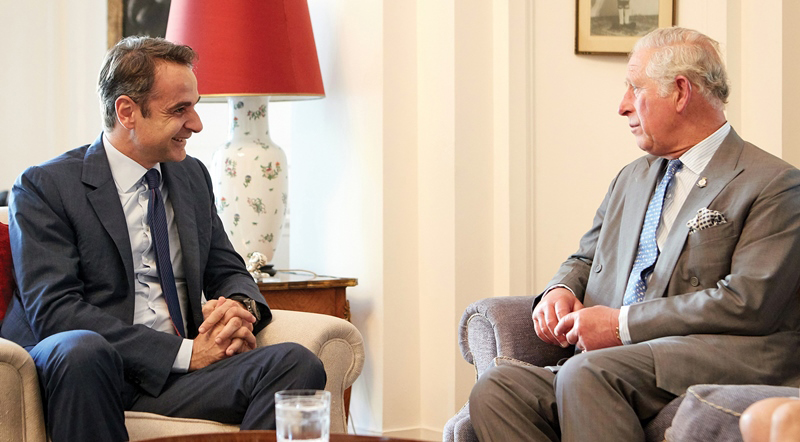 Greece considers the United Kingdom a valuable partner within the European Union, the Greek Head of State continued, expressing hope that the final decisions taken in Britain will have its European orientation in mind. “Regardless of this, however, and under any circumstances, our two countries’ harmonious course, side by side, will continue undisturbed,” he added.

Within this context, Greece hopes to continue cooperating closely on the refugee and migration issues, President Pavlopoulos said, since these are an enormous challenge for Europe and elsewhere. The Greek President once again highlighted the heavy burden placed on Greece as a country of first entry for migrants and refugees, as well as Greece’s continued commitment to the principles of humanity and solidarity in the midst of a deep economic crisis.

Greece will continue to act as a pillar of stability and peace in the region, especially after its emergence from the long economic crisis, through initiatives it has already launched in the Balkans and the Middle East, he said. 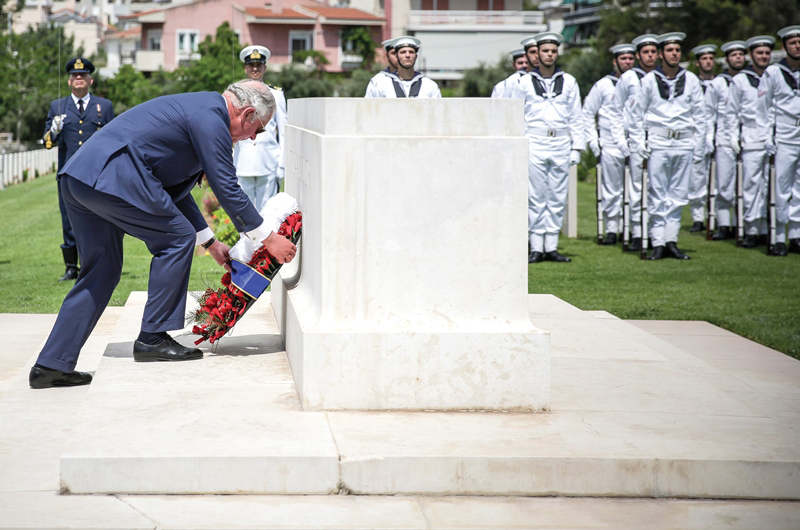 The President’s speech referred to the long historic ties between Greece and the United Kingdom, which date back to the formation of the Modern Greek State, as allies and through the strong naval traditions of both countries. He also pointed out that the Prince of Wales and the Duchess of Cornwall have visited Greece many times in a private capacity, though this was their first Official Visit. He especially praised the Royal couple for their charitable work, which he said had supported “hundreds of thousands of people in the UK and around the world.”

Prime Minister Alexis Tsipras received HRH Prince Charles and Duchess Camilla at the Government headquarters in the Maximos Mansion. Thanking the Greek Prime Minister for his warm reception, the Prince of Wales referred to his previous visits to the country and his certainty that Greece and Britain can achieve much by cooperating in areas such as security, migration and others. 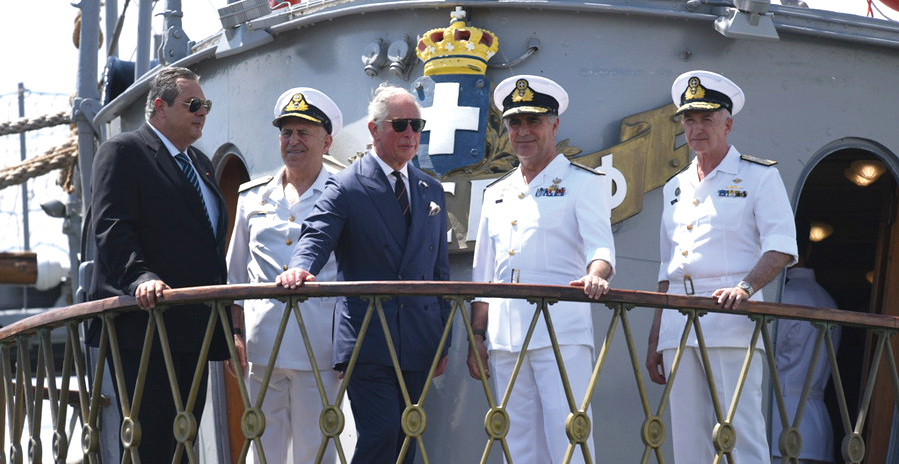 Noting that this was a first Official Visit by a member of the British Royal Family to Athens, Premier Tsipras said it could be a milestone in relations between Greece and the United Kingdom. The Premier also used the opportunity to announce that he had accepted an invitation from British Prime Minister Theresa May to visit London in June.

“It is with great pleasure that I welcome you to Greece. I know that you have visited Greece many times in the past, but privately. This means that you love our country. It is the first time, however, that you are visiting Greece in your official capacity and, as I was recently informed, it is the first time that a member of the British Royal Family is carrying out an Official Visit to Greece,” Prime Minister Tsipras said.

“I consider that this is a very important event and I believe, also, that your visit can be a landmark in our bilateral relations. Especially now, when both our countries are facing crucial turning points in their history; and this is the reason why I believe we have to enhance our cooperation even more,” he added. 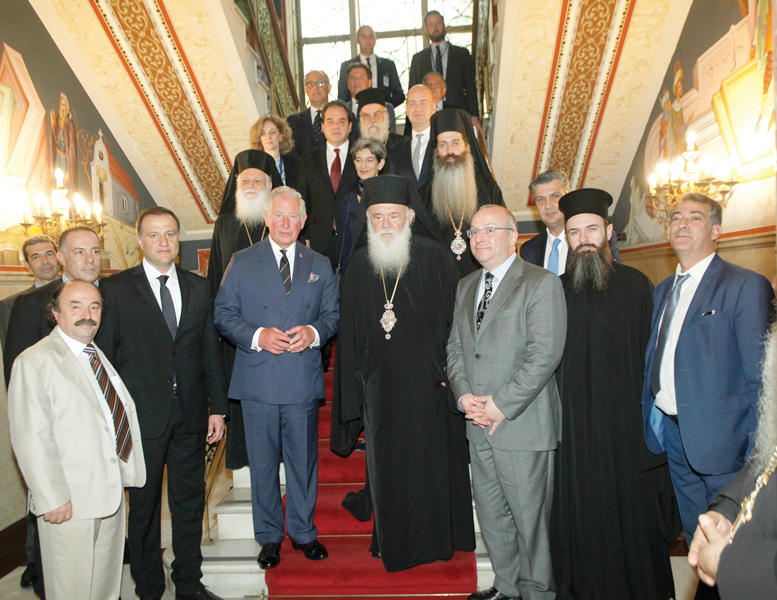 Replying to the Greek Premier, Prince Charles said that his Official Visit to Greece was an opportunity to highlight the ties between the two countries, which go back a long way. He expressed hope that Greece and the UK will continue to enhance relations in those areas that they already share and achieve a great many things as regards security and migration and in the major challenges that the two countries face. He also thanked the Greek Government for its support and cooperation in all areas, expressing his conviction that the great friendship between the two countries will continue in the future.

Enriching her visit to the Greek capital, Camilla, the Duchess of Cornwall, accompanied by the wife of the Greek Prime Minister, Betty Baziana, made a very interesting tour of the Benaki Museum.

Pictured from above: HRH Prince Charles addresses a State Dinner held in his honour by the President of the Hellenic Republic Prokopis Pavlopoulos; Prince Charles meets with Prime Minister Alexis Tsipras; and with President of the main opposition New Democracy party, Kyriakos Mitsotakis; in remembrance of the fallen, laying a wreath at the Allied Cemetery of Alimos; visiting the Battle Cruiser Averof in the company of Defence Minister Panos Kammenos, HNDGS Chief Admiral Evangelos Apostolakis, HNGS Chief Vice Admiral Nicolaos Tsounis and the ship’s Commander Captain Sotiris Charalambopoulos; visiting the Archbishop of Athens and All Greece, Hieronymus at the Archdiocese.