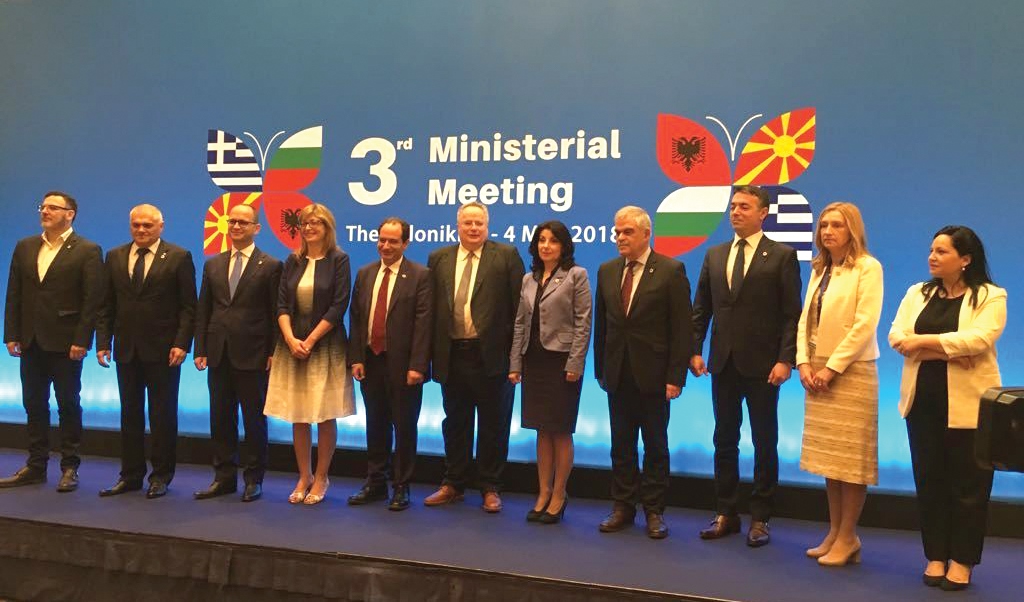 The Third Ministerial Meeting between Greece, Albania, Bulgaria and the former Yugoslav Republic of Macedonia took place on 3rd-4th May in Thessaloniki with the participation of the respective Ministers of Foreign Affairs, Interior and Transport.

Talks between the Foreign Ministers focused on issues of common interest, with an emphasis on recent developments in the Middle East and the Eastern Mediterranean and their impact on the Balkan region; the prospects of accession of the Western Balkan countries; the Future of Europe and the strengthening of cooperation to execute common planning in the region.

In parallel meetings, the Ministers of Transport examined ways of strengthening and upgrading connectivity between the road and rail networks of the participating countries. Similarly, the four Ministers of Interior investigated into issues of cross-border cooperation, with an emphasis on police cooperation, cross-border crime and fire protection.

“Changes that happen in the world lead us to the conclusion that we must intensify and deepen our cooperation in the region of Southeastern Europe,” Foreign Minister Nikos Kotzias said during his opening speech at the 3rd Ministerial Meeting. Referring to the four countries participating in the meeting, he said he needed to further develop connectivity and cooperation, with two goals: that Albania and the Former Yugoslav Republic of Macedonia join the European Union and prepare for their cooperation within the EU.

Minister Kotzias expressed his satisfaction that the initiative for the ministerial meeting of Greece, Albania, Bulgaria and the Former Yugoslav Republic of Macedonia – which started on the Greek side two and half years ago – has become an institution and has been extended with the participation of other ministers, aside from the foreign ministers of the four countries.

“It has become a common ground of our coexistence, where we can exchange views honestly, directly and with sincerity, as we always do. And in a way that would be good for another part of Europe to adopt, which converses more bureaucratically than creatively. We have problems, but we cannot develop our relations by covering them up. What we are doing, by discussing them, exchanging thoughts, criticisms and comments, help us solve problems and make progress,” he said.

Minister Kotzias proposed extending cooperation between ministry services on refugees and migration and for developments in Europe, the Middle East and the Arab countries. Regarding Syria, he said that it is not a real civil war since it also involves another nine powers, in addition to Syrian forces. He voiced his concern that Syrian law does not provide protection for the property of some 14 million refugees who have left the country and thus raises obstacles to their return.

He further pointed out that Turkey’s presence in Afrin calls into question the Treaty of Lausanne on its eastern border and that this is a matter of concern to several countries, including Greece.

He called for closer cooperation between the four countries on handling refugees and guarding borders, while he also proposed partnerships in several areas, such as between universities and research centres through the joint organisation of conferences and other events. He further referred to a positive agenda for cooperation in energy and infrastructure.