Foreign Minister meets with counterparts in: Serbia, FYROM and Kosovo 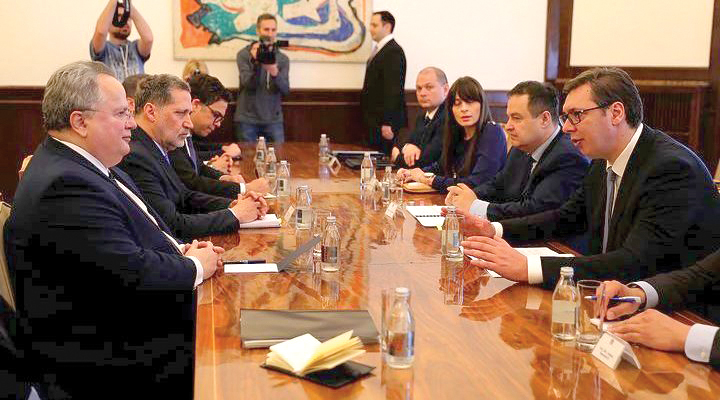 The head of diplomacy of the Hellenic Republic, Foreign Minister Nikos Kotzias, paid a three-day tour in Serbia, the Former Yugoslav Republic of Macedonia (FYROM) and Kosovo from April 10th-12th, thus boosting Greece’s important role in the Balkans through the multi-dimensional and active policy of the Greek Government. 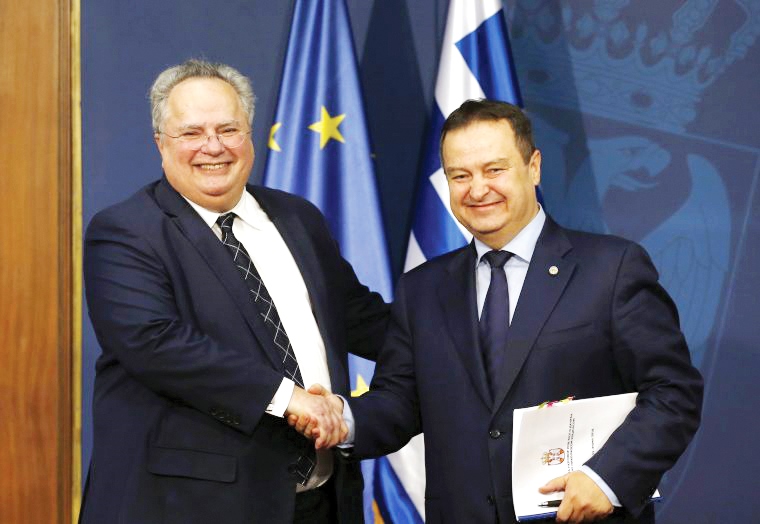 His first stop was in Belgrade, Serbia, where he met with Serbian Vice President and Foreign Minister Ivica Dačić and President Aleksandar Vučić.

The two Foreign Ministers discussed bilateral ties between the two countries and the European prospects of the western Balkans ahead of May’s EU-Western Balkans Summit in Sofia. Ministers Kotzias and Dačić and the Serbian President Aleksandar Vučić addressed regional issues, focusing on the Western Balkans, Turkey, the Cyprus problem, FYROM and the EU.

The main discussions focused on the deepening of bilateral cooperation, especially in view of the 2nd High-Level Cooperation Council between the two countries, on the European perspective of the Western Balkans and on developments in the wider region.

Greece and Serbia, strategic partners in the Balkans and Europe, have recently been building even stronger ties. Undoubtedly, this can be seen through the many high-level meetings between officials of the two countries, as well as the participation of the two countries in the quadrilateral cooperation with Bulgaria and Romania. 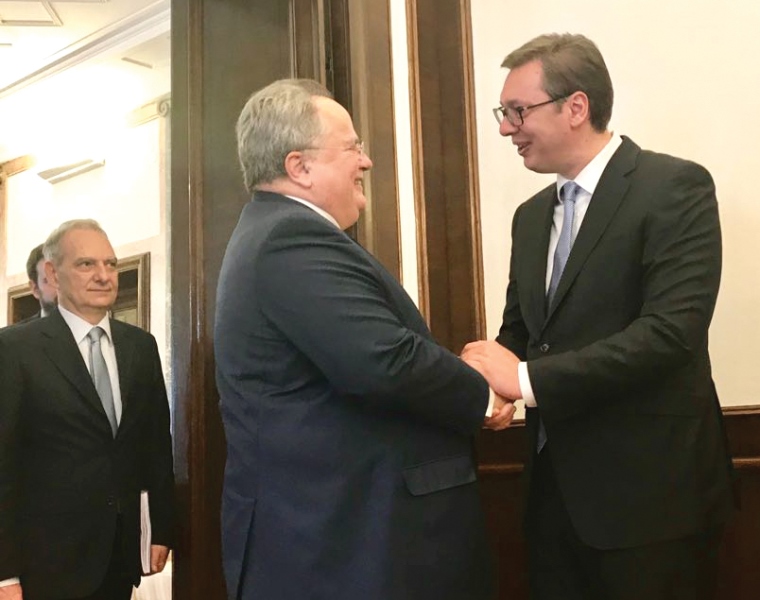 Talks also concentrated on infrastructure projects designed and decided to ‘fit’ into China’s vision of the ‘One Belt One Road’ by further upgrading the position of the two countries in Southeastern Europe. Greece and Serbia are considered to be of key importance to the Chinese leadership that reinforces the bilateral contacts between the two Balkan countries in various ways. In addition to infrastructure the two sides exchanged views on energy issues.

Serbia’s European perspective was discussed in Belgrade, while the issue of Kosovo was also raised, as Minister Kotzias, after his visit to the lakeside resort of Ohrid, FYROM, went to the capital of Kosovo Pristina for meetings with high-level political figures of the country. Greece to date has not recognised Kosovo as an independent state. 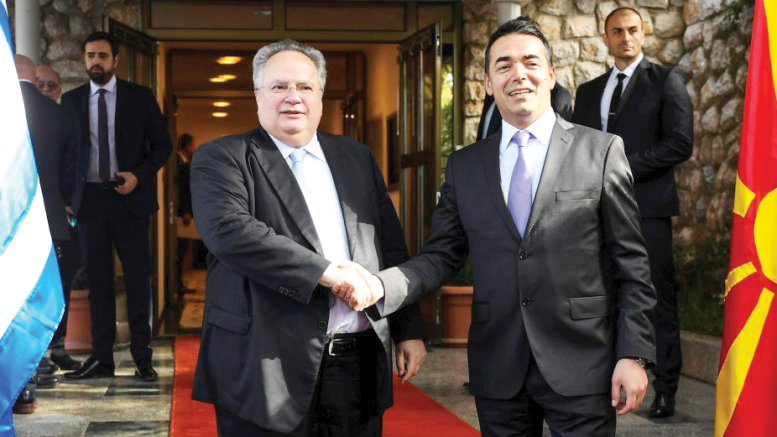 Ahead of talks between Greece and the Former Yugoslav Republic of Macedonia (FYROM) on the decades-old name dispute, Greek Foreign Minister Nikos Kotzias said that compromises and “realism” are prerequisites for a deal.

“The key to solving the name issue is realism, pragmatism and the idea that we must make compromises, not fake [compromises], but compromises that will benefit both sides,” Minister Kotzias said during a joint press briefing with his Serbian counterpart Ivica Dačić, in Belgrade.

“Compromise means that both sides have to realise that they cannot have it all and that both sides must have gains. I hope that this has been understood by all sides in this negotiation and that we will see positive developments,” he added before the talks in Ohrid with his counterpart Nikola Dimitrov.

In Athens, Government Spokesman Dimitris Tzanakopoulos told media that the Government remains optimistic, but said more must be done before a deal can be clinched. “We have the political conditions and will for a solution, however a significant amount of ground must still be covered in the negotiations,” he said, adding that that the Greek Government has proposed a specific framework that will make a deal possible.

According to reports, United Nations mediator Matthew Nimetz has sent Ministers Kotzias and Dimitrov a letter outlining the parameters of a solution.

“We took the steps that we could today, positive steps, and we continue to hope that we can make easy the difficult and larger issues. Nikola and I were confronted by the big and difficult issues. We are trying to solve problems that were created in other eras and by others, but that is the task of diplomacy,” Minister Kotzias said, noting that there will be meetings on 3rd-4th May in Thessaloniki and on 11th-12th May in Attica.

“The framework of common actions and cooperation resulted from very good diplomatic work. For us, the issue of irredentism is very serious. The closer we come and the more issues we resolve, there are ever fewer topics for discussion, but these are the most difficult,” Minister Kotzias added.

Minister Dimitrov also noted progress on the name issue and said that the two sides discussed a timetable for the first time. “We had very honest discussions on all the issues related to the name. On some issues there is progress, and on others there are still differences. For the first time we discussed the time frame and the further steps if an agreement is reached. We shall inform our Prime Ministers and the process will continue,” Minister Dimitrov said.

Minister Kotzias had issued a call for a bold compromise from both sides on the FYROM naming talks, which many believe will determine the prospects for a settlement. “The key for resolving the name issue is realism, pragmatism and the realisation that we must make compromises – not rotten compromises, but compromises that produce a win-win situation,” Minister Kotzias said.

The key compromises that Athens is asking Skopje are to make are a revision of the FYROM Constitution to remove irredentist references against Greece and a guarantee that the country’s new name will apply domestically and in all of FYROM’s foreign relations, including bilateral. 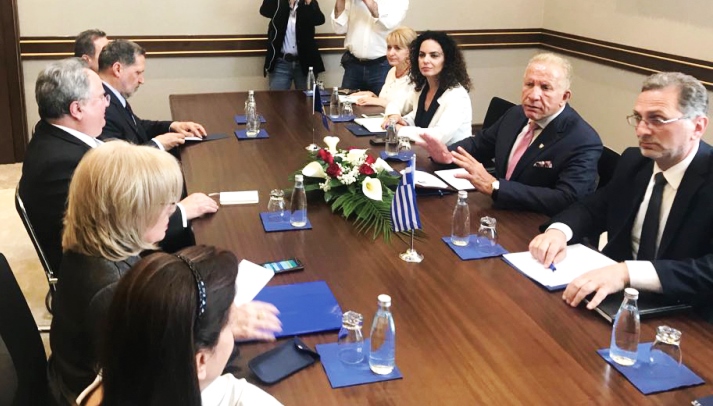 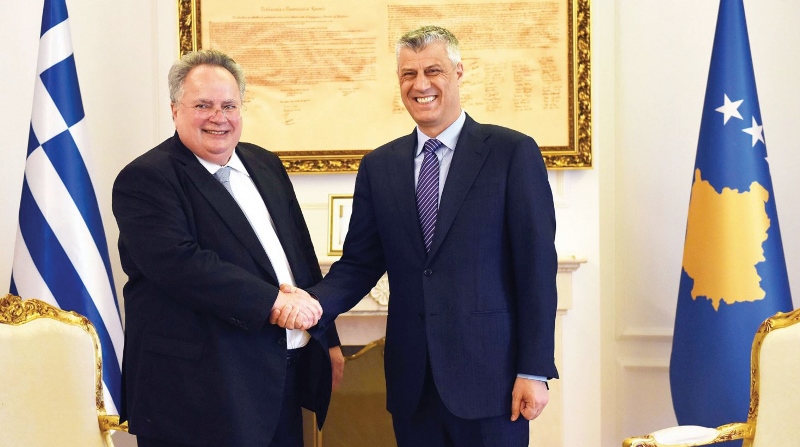 Pictured above: the head of diplomacy of the Hellenic Republic, Foreign Minister Nikos Kotzias, pictured during his three-day tour in Serbia, the Former Yugoslav Republic of Macedonia and Kosovo – in discussion with Serbian President Aleksandar Vučić and Vice President and Foreign Minister Ivica Dačić; with his Serbian counterpart Ivica Dačić; in Skopje with Nikola Dimitrov; in Pristina with First Deputy Prime Minister and Foreign Minister Behgjet Pacolli; greeting Serbian President Aleksandar Vučić in the presence of Ambassador of Greece to Serbia, Ilias Iliadis; with President of Kosovo Hashim Thaçi. 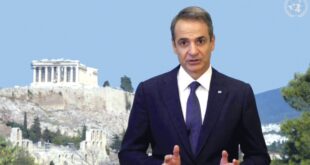 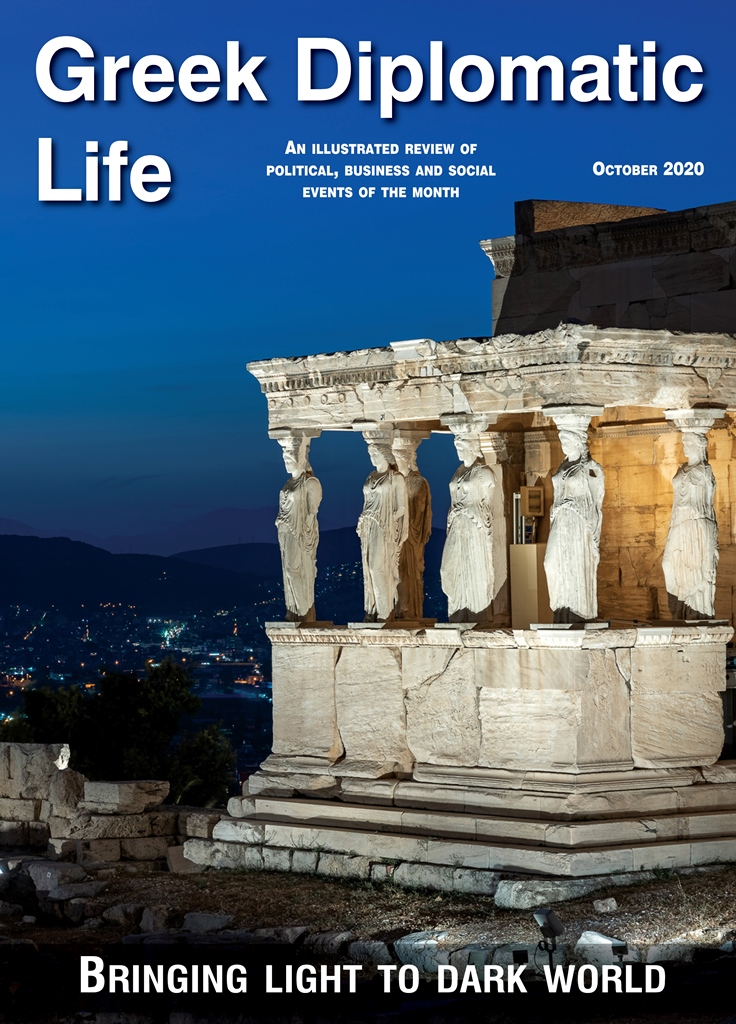