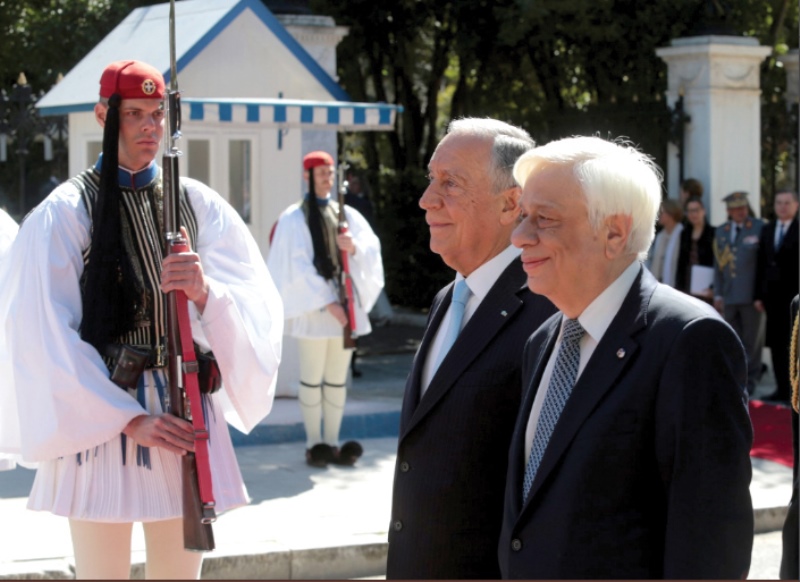 Greece can count on Portugal’s support to tackle common challenges, Portuguese President Marcelo Rebelo de Sousa told Greek political leaders during his State Visit in Athens on March 13th-14th. “Greece will fully meet the obligations it has undertaken… We are confident that our partners will do their part to ensure that the Greek debt becomes manageable,” his Greek counterpart Prokopis Pavlopoulos said while welcoming President de Sousa at the Presidential Mansion. 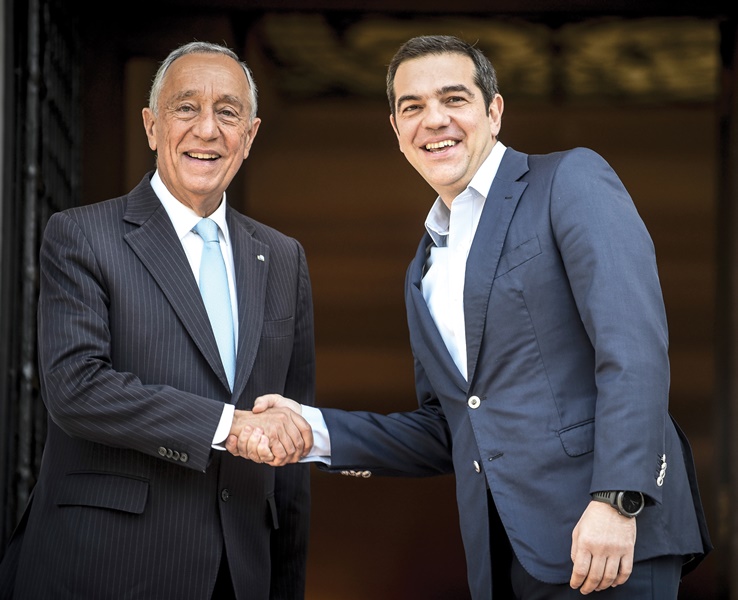 The Portuguese Head of State responded that the Greek people can count on Portugal’s support and expressed his admiration for the country’s efforts during the past eight years of the debt crisis.

“I know that this is a historic moment for Greece. You can count on Portugal,” he repeated during a meeting with Greek Prime Minister Alexis Tsipras, referring to Greece’s upcoming exit from the bailout programmes this summer.

“Portugal is a positive example for us, because it managed to leave behind this undertaking of the programme earlier, and this acts as a precedent that I believe is binding for creditors so that they handle similar problems in the same way,” the Greek Prime Minister said. 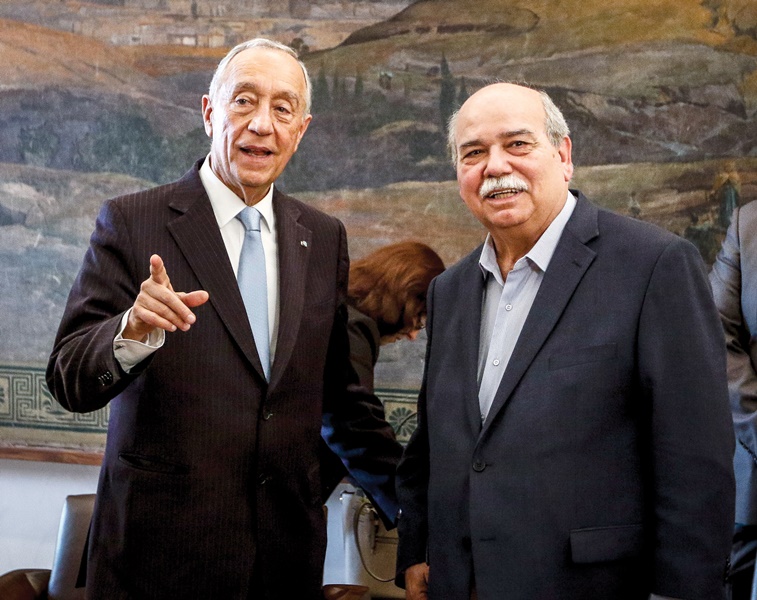 “We will be done with the programme this August and we already see a big difference in the economic figures. We hope that we can bring a change also to the social indexes and to people’s sense of the real economy as well, exactly as happened in Portugal,” Premier Tsipras added.

President Marcelo Rebelo de Sousa highlighted similarities between the Greek and Portuguese people and governments. “We are democrats, social states, European – Southern European, but we have a wide view of Europe that lets us talk and ensure convergence with other European states in the defence of the same principles,” he added.

Any country that wants to join the European Union must abide by the European acquis and International Law, President Prokopios Pavlopoulos said, addressing his visiting Portuguese counterpart Marcelo Rebelo de Sousa during a dinner held in his honour at the Presidential Mansion. 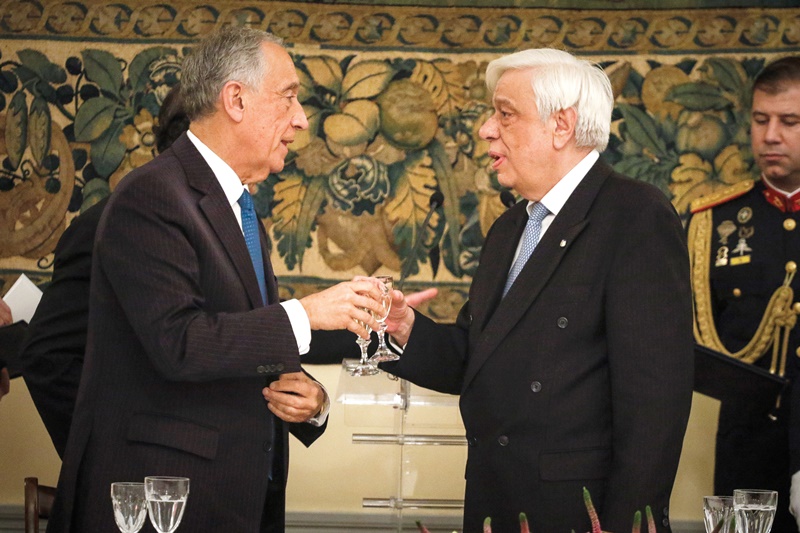 He continued to say that any state wishing to join the Union must also resolve all its differences with its neighbours. President Pavlopoulos noted the importance of defending Man and Humanity in dealing with the refugee issue.

The Greek President said that the two peoples are “conscious and consistent Europeans,” who are loyal to the principles and values Europe and its culture. He said that both countries proved recently, with “huge sacrifices” that they are committed to their EU path and the Eurozone.

On his side, President Rebelo de Sousa said the recent lessons of Europe’s difficult past must help member states move a step further towards a comprehensive monetary and economic union and called for an ambitious approach to the EU’s next multiannual fiscal framework and to fight for the preservation of European unity.

“We fight for life and dignity. We accept thousands of refugees, we face major social and economic challenges and one day we will all be able to say that we have managed not to call into question the European tradition of hospitality and asylum,” he said.

He also expressed Portugal’s support towards Greece, noting that “the Portuguese are proud to be standing next to Greece at this difficult time.” The Portuguese Head of State said his country embraces European principles with regard to the protection of its external borders, which means the Greek borders, noting it is the European Union’s common “home”. 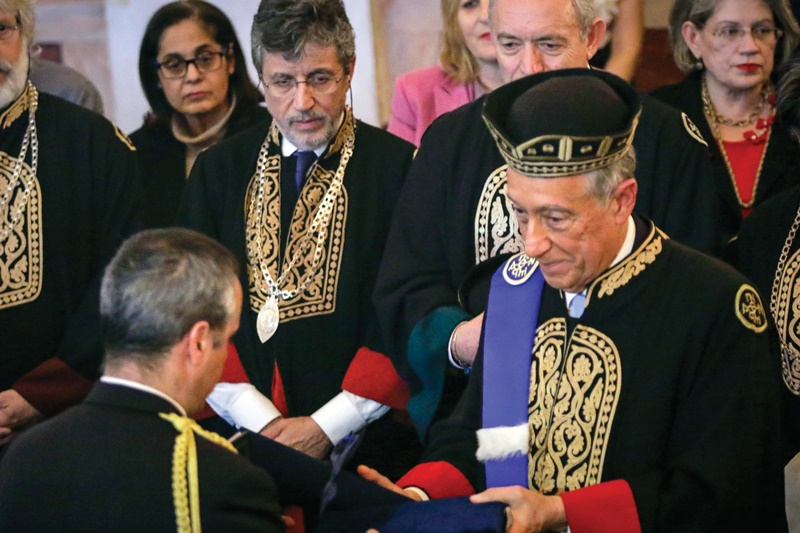 As part of his official programme, President Marcelo Rebelo de Sousa laid a wreath at the Tomb of the Unknown Solider, visited a refugee camp and was honoured with the title of doctor ‘honoris causa’ by the National University of Athens.

Lisbon, Athens agree on essential points of future of the EU

The President of Portugal said that Portugal agrees with Greece about the essential points of the future of the European Union and understands and supports the “Greek example” regarding the acceptance of refugees. President Marcelo Rebelo de Sousa was speaking at a reception for the Portuguese community in Greece at a central Athenian hotel.

“The Portuguese Constitution talks about human dignity and we take this constitutional demand very seriously: to respect all people, wherever they come from, whoever they are. And that is our position about migration and refugees,” he said.

Earlier in his speech, the President said that Portugal and Greece have a “common view on very sensitive points regarding the future of the EU”, which he believed would become crucial in the coming months and years. “Portugal and Greece agree on essential facets of what is going to be discussed,” he said.

President Marcelo Rebelo de Sousa also said that there were cases that are obvious, such as what is happening with migrants and refugees, but there are also common positions in other areas such as the conclusion of the Economic and Monetary Union, the multi-annual financial framework and the EU’s internal and external political and institutional position.