The 1st Trilateral Summit of Cyprus, Greece and Jordan 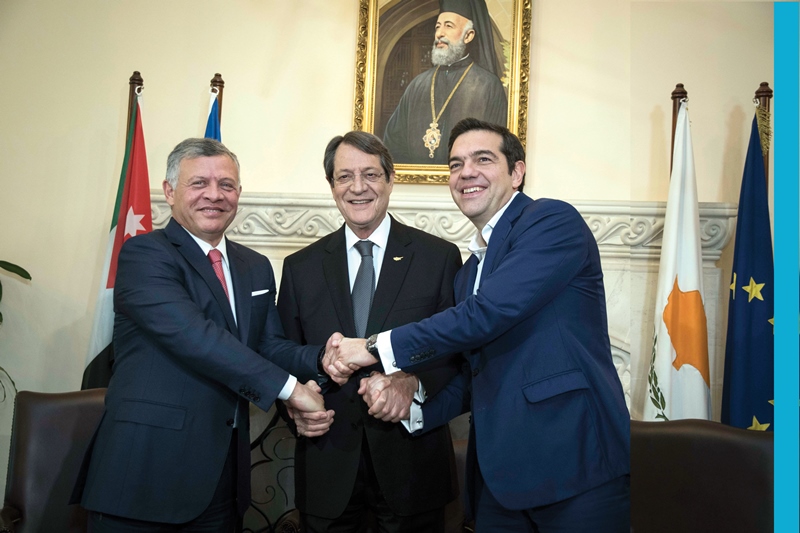 “Greece, Cyprus and Jordan are pillars of stability, peace and security” 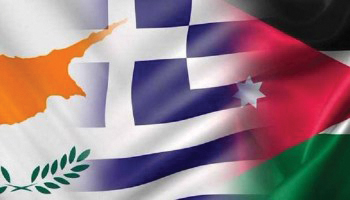 The first trilateral summit of Cyprus, Greece and Jordan establishes the role of the three countries as pillars of stability, peace and security in the region, Greek Prime Minister Alexis Tsipras said during joint statements with Cyprus President Nicos Anastasiades and King Abdullah II of Jordan, after the conclusion of the summit in Cyprus on January 16th.

Cyprus, Greece and Jordan signed agreements to cooperate in areas such as renewable energy, the maritime sector and the fight against the illicit antiquities trade, during the first-ever trilateral summit held between the leaders of the three countries.

Following expanded talks between the three leaders and their respective delegations, President Nikos Anastasiades, Greek Prime Minister Alexis Tsipras and King Abdullah of Jordan signed a mix of propositions and projects, an agreement and a Memorandum of Understanding covering the three areas of mutual interest.

“I consider this initiative to be of great importance at a time when we are faced with major challenges, but also when important opportunities are emerging in our region, the Eastern Mediterranean. Our trilateral cooperation is based on firm foundations. Firstly, because our countries have important historical, cultural and economic ties with Jordan, ties of friendship between our peoples, on which we will work. And second, because we have established our position as a pillar of stability, peace and security in the region,” Premier Tsipras underlined.

The Greek Prime Minister also stressed the need for the international community to actively and effectively support the countries hosting large numbers of refugees and bearing the burden of meeting so many humanitarian needs. Jordan, he pointed out, is currently hosting 1,500,000 refugees while Greece and Cyprus have a large burden of refugee flows across Europe.

The Greek Prime Minister also stated that a fair and viable solution for the Cyprus problem must be reached, which is based on UN treaties and the Cyprus Republic’s capacity as a member of the European Union, without guarantees and occupation troops. He noted that Turkey must confirm that it is truly committed to a peaceful resolution of the issue within the framework and parameters set by the United Nations. He further said that the summit also stressed the need to finding a solution to the Syrian crisis, in a way that improves conditions on the ground and guarantees a democratic future.

He added that Greece and Cyprus face grave repercussions for being neighbouring countries to Syria from the southern borders of the EU and are barriers in the face of terrorism.

On the Palestinian issue, the Greek Premier highlighted the importance of resuming just peace negotiations based on the two-state solution.

President Anastasiades said the trilateral summit had reconfirmed the relations and bonds of friendship between the three countries and set the foundations for strategic and regional partnership for political, economic and social benefits.

He described the declaration for cooperation between the three countries in the fields of security, peace and prosperity as important, adding that the talks were constructive and would help in further promoting relations. “The declaration reflects the common understanding of the three countries that cooperation can contribute to handling the challenges in the wider region and peace, security and stability, as well as prosperity,” he said.

He said the summit had taken place at a critical time for the wider region. “One of the most important challenges we are asked to handle is fighting terrorism, a phenomenon that requires the close cooperation of the three countries,” he added. He further welcomed an initiative by Jordan’s King Abdullah against terrorism and expressed Nicosia’s support for these efforts. He also assured King Abdullah of Cyprus and Greece’s support in the EU.

His Majesty King Abdullah highlighted the importance of the summit in developing relations among the three countries in a way that serves their peoples and the region. He added that: “Today marked the launch of what we hope will develop into a fruitful trilateral partnership that benefits all our peoples and our wider region.” “We in Jordan are committed to cooperating in such vital fields as energy, water, agriculture and tourism as were mentioned. And moreover, the agreements we are signing today will undoubtedly help us advance our ties even further,” His Majesty added.

The King noted that creating partnerships between the private sectors of the three countries in these promising fields will provide jobs and opportunities for the people and benefit the region by ensuring peaceful prosperity and synergy. “It is no secret that we live in a very tough neighbourhood, rife with challenges, but also with opportunities; and together, our chances of capitalising on these opportunities and taking on these challenges increase tenfold,” King Abdullah stressed.

“During our very extensive and productive discussions, we agreed to continue our cooperation within the framework of Jordan’s partnership with the European Union,” he added, expressing the Kingdom’s aspirations to work with Cyprus and Greece to benefit from the EU’s simplified rules of origin to enhance “our national industries and increase our exports to Europe”.

In addition, the discussions covered key global and regional issues, King Abdullah said, adding that Jordan continues to support the efforts of Cyprus to reach a comprehensive, just, lasting and viable solution to the Cyprus problem in accordance with UN Security Council Resolutions and International Law.

As for the Middle East, the King stressed that “there can be no peace; nor can there be stability without a just and permanent solution to the Palestinian-Israeli conflict and Jerusalem is key to resolving it”. The issue of Jerusalem must be settled within a comprehensive peace agreement based on the two-state solution that guarantees the establishment of an independent Palestinian state, with East Jerusalem as its capital, living side by side with Israel, His Majesty said.

He added: “No unilateral decision on Jerusalem will change the legal and historical facts or undermine the rights of Muslims and Christians to the Holy City.” The Hashemite Custodianship of Jerusalem’s Islamic and Christian holy sites is a religious and historical responsibility that Jordan remains fully committed to, King Abdullah emphasised.  “But the whole world has a vested interest in the responsibility towards Jerusalem and the Palestinian issue; we all have a stake in reaching peace, and avoiding the consequences of further escalation. And here the European Union can contribute to efforts to bring Palestinians and Israelis to the negotiating table.”

He added that Jordan, Cyprus and Greece are also committed to fighting the global terrorist and extremist threat within a holistic approach. “To that end, Jordan, through the Aqaba Meetings, has been working to bring allies and stakeholders together to discuss how coordination can be improved to close off all avenues to terrorists and extremists around the world. And I, again, want to thank the role of Cyprus in this process,” the Monarch said.

The victories achieved in Iraq against terrorism and the gains in Syria mark substantial progress in this fight; however, terrorist groups cannot be allowed to regroup and establish footholds elsewhere, he stressed. “For Syria, we affirm the importance of building on the Astana talks to reach a political solution through the Geneva process that maintains the country’s territorial integrity and fulfils the aspirations of the Syrian people.” 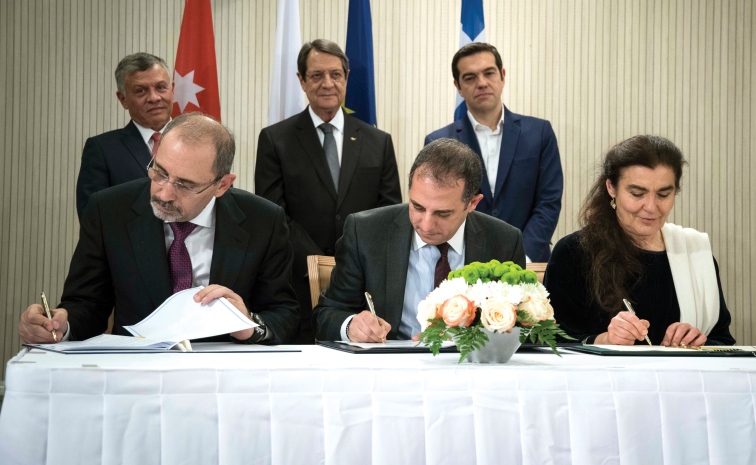 In this regard, the King added: “And in the meantime, the plight of Syrian refugees remains an international concern and host countries like Jordan need the world’s support. We are shouldering an immense refugee burden and cannot be left alone as we undertake this humanitarian responsibility on behalf of the world.”

Meanwhile, His Majesty King Abdullah and President Anastasiades held talks in the Presidential Palace on bilateral relations and the latest regional developments. They also attended the signing of several agreements and memoranda of understanding in the fields of technical and economic cooperation, mutual accreditation of higher education certificates and increasing student exchange, maritime transportation, public health and medical sciences and agriculture.

King Abdullah also had a meeting with Premier Tsipras, where they highlighted the “deep-rooted” ties between Jordan and Greece and the importance of further developing them. Jordan and Greece signed a cooperation agreement on maritime transportation.

(Photos: A.Bonetti/Office to the Prime Minister.)