Minister of Foreign Affairs meets with counterpart in Italy 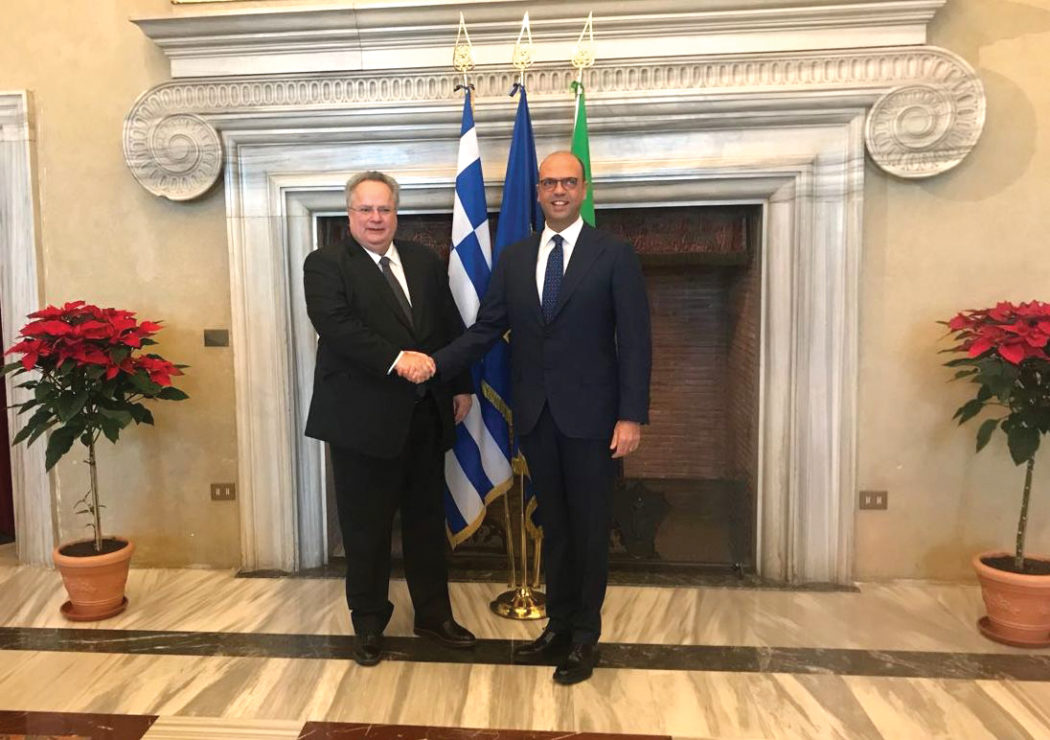 The Minister of Foreign Affairs, Nikos Kotzias, carried out a visit to Rome and met with his Italian counterpart Angelino Alfano at the end of December. The talks focused on further deepening of bilateral relations and strengthening of cooperation in sectors of mutual interest in light of the current developments and common challenges in the wider region.

During the meeting, as well as bilateral relations, there was talk of migration, the Western Balkans, Turkey and Libya.

Within the framework of his visit, the two Ministers signed a Memorandum of Understanding on Political Consultations, as well as a Memorandum of Cooperation in the sector of Diplomatic Training between the Greek and Italian Ministries of Foreign Affairs. 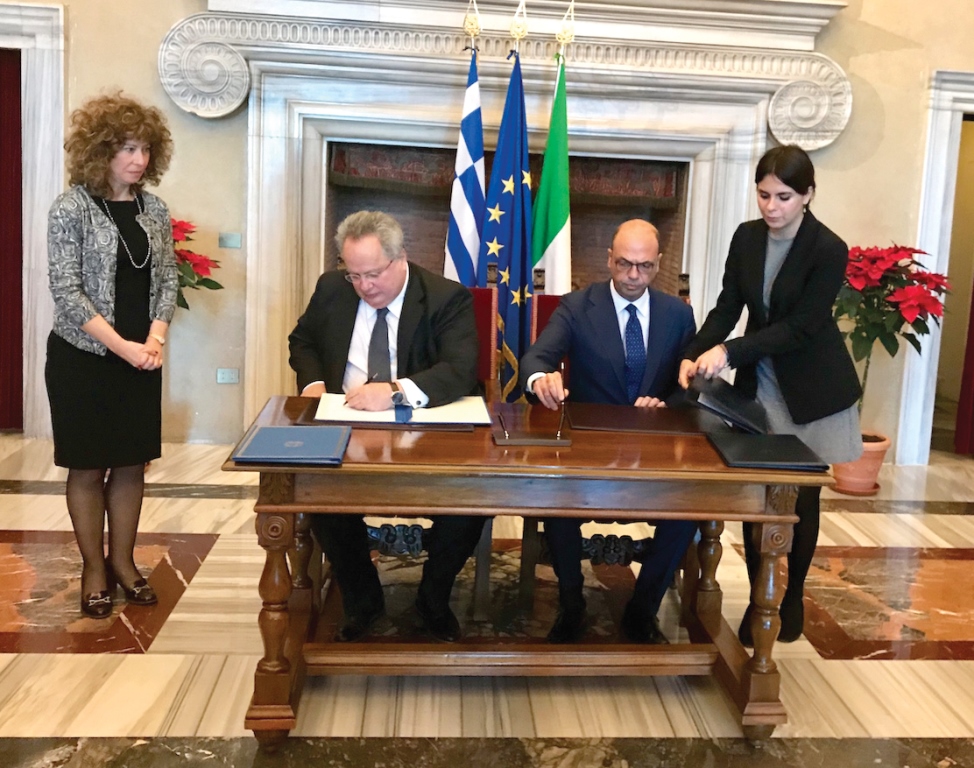 The Italian Minister of Foreign Affairs welcomed his Greek counterpart at the Villa Madama in western Rome; a venue where only very special, important and meaningful meetings are held. Thus, Minister Kotzias became the second minister after the Russian Foreign Minister, Sergey Lavrov, who was hosted there in the year 2017. In fact, this choice of venue proves how the Italian Government considered the visit and the importance Rome attached to it.

On top of that, the climate among the two European politicians was so warm that, after the official and programmed time of the meeting was over, Ministers Kotzias and Alfano held a private get together that lasted for another half hour.

“Our talks were about bilateral issues and we focused particularly on the energy cooperation among us. We discussed a possible future agreement on matters concerning maritime zones,” said the Greek Minister when asked about the meeting.

“We had a very interesting discussion today, following up on the talks we had in Corfu between the two Governments and one-on-one. We have decided to diligently and systematically continue to develop the relations between Greece and Italy, between the Italian Ministry of Foreign Affairs and the Hellenic Ministry of Foreign Affairs, to the benefit of the peoples of the two countries.

“We have a number of plans for developing our relations in the sectors of energy, culture, education, economy and through political consultations between the two Ministries,” Minister Kotzias pointed out.

Moreover, he added that “We had an in-depth-talk about international developments. I was asked by the Italian side to make analytical comments about Greece’s stance on global changes, on the way we (Greece) perceive the new US leadership and the future role of China.”

Minister Kotzias also spoke about the extent to which the two neighbouring countries share the idea of a socially-focused Europe in the near future. “I think that we (Greece and Italy) are on the same page, since, as you know, after I took the initiative and with Hungary’s support, we organised the Budapest meeting of 10 – the Visegrad Group with Greece, Bulgaria, Croatia, Romania, Slovenia and Serbia. In three months from now, Greece will host a similar but enlarged meeting, between all of the above-mentioned states as well as those of the Western Balkans that are in the accession process, Turkey among them. I have already invited my Italian colleague to attend the Athens meeting and I believe he wants to be there.”

Regarding the Dublin Regulation and the Visegrad bloc countries that seem to be pulling back, Minister Kotzias believes that Greece and Italy have a similar policy due to the fact that they (as countries) go through the real problems of migration. “What I want to underline at this point is something I always say; the ones who engage in bombarding people are not the same as the ones who pay the price”.

On his part Minister Alfano underscored that the ties of both states are historical and that history usually creates destiny. “So the history and destiny of Greece and Italy are in the same direction; they are aligned towards a future of shared peace, development and prosperity within the framework of the EU. This is the point of the agreement that was strengthened in Corfu this past September; it is the point of everything we said today,” he stressed.

He also expressed his gratitude to Minister Kotzias for his support on the issue of the European Medicines Agency and stressed their cooperation, which can develop productively in the energy sector and in other fields opening up for further development with Greece.

“The intensification of bilateral contacts and the Corfu Summit on 14th September is a tangible sign of the willingness of both countries to give new impetus to the bilateral relationship,” he added.

Previous Afghanistan Foreign Minister opens first ever Embassy in Greece – Interview with the Chargé d’Affaires
Next The 1st Trilateral Summit of Cyprus, Greece and Jordan