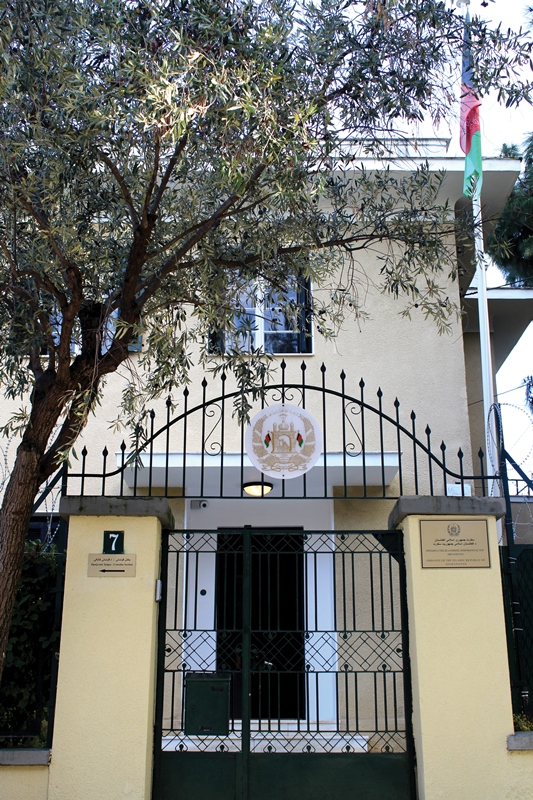 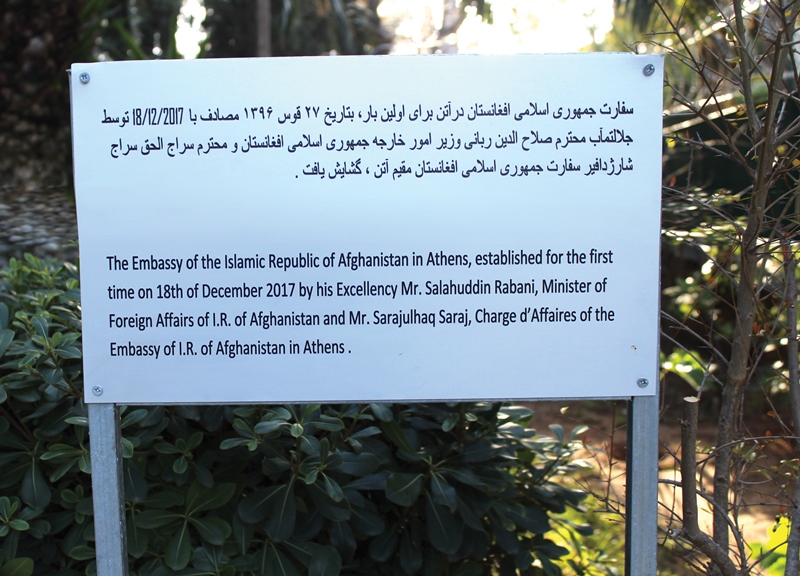 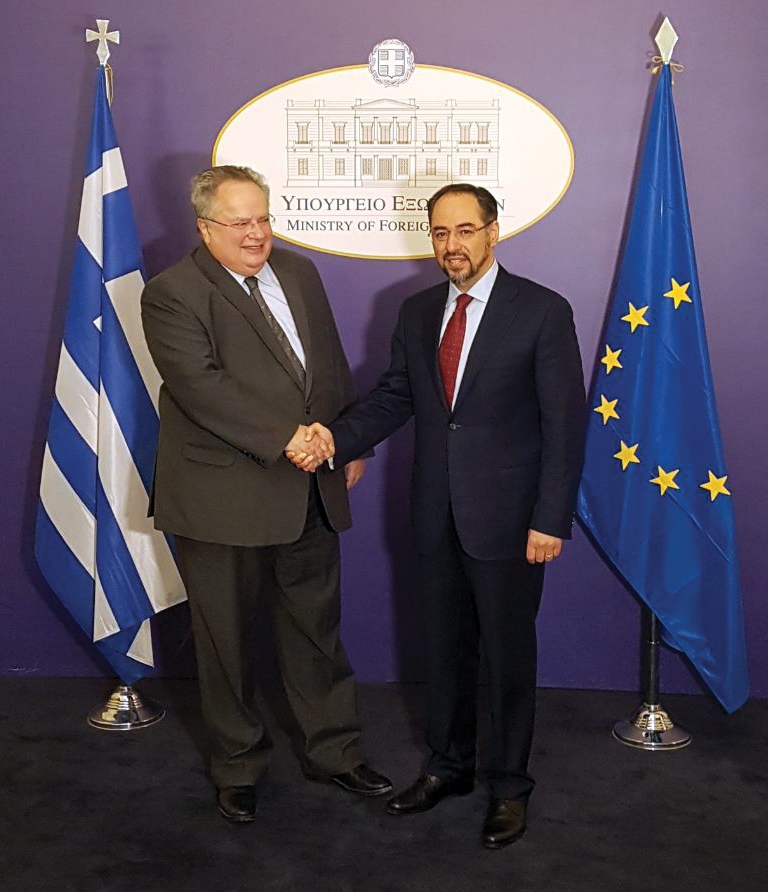 Minister of Foreign Affairs Nikos Kotzias recently met at the Foreign Ministry with the Minister of Foreign Affairs of Afghanistan, Salahuddin Rabbani, who was carrying out an Official Visit to Greece. The two Ministers focused on the upgrading of bilateral cooperation, marked by the opening of the Embassy of Afghanistan in Athens. Following their meeting they made joint statements to the press.

Welcoming his Afghan counterpart to Athens, Foreign Minister Nikos Kotzias stressed the importance of Afghanistan’s diplomatic representation in Greece. “The opening of the Afghan Embassy in Greece is a step forward in our relations and in the re-internationalisation of the country, which is growing ever stronger in international diplomacy,” he said.

“There is a lot we can do in way of cooperation between our countries and we can develop different activities and different areas including education and training police officers, as well cooperation in the field of culture, archaeology and developing further our economic relations,” he added. 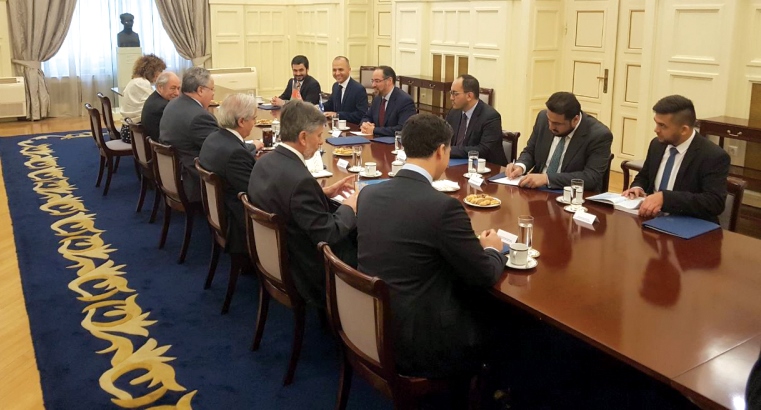 The Greek side proposed the need to systematise the relations through reciprocal visits of Ministers, Secretaries General and Political Directors through cooperation between the European and Middle East Directorates. “Our offer of cooperation on European Union issues, on which Greece has great expertise, was accepted. Moreover, we would like university students to come to study in Greece and we will send experts to help our Afghan friends gain a deeper understanding of the European Union,” the Greek Minister said. 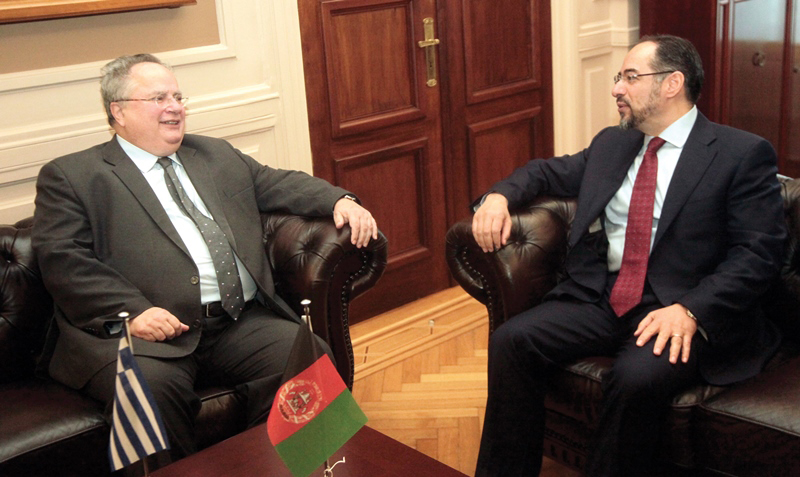 Afghan Foreign Minister Salahuddin Rabbani said that his country wants to strengthen its ties with Greece, including expanding trade and economic relations with the country. “We are grateful of what Greece has done and supported within the framework of ISAF and international security forces in the past by contribution of troops,” Minister Rabbani said. “I am glad to say that the Minister proposed training for the police which is something that we appreciate and welcome and we look forward to expanding our trade and economic relations with Athens,” he added.

The Minister of Foreign Affairs of the Islamic Republic of Afghanistan oversaw the inauguration of the Embassy of Afghanistan in the capital of Greece. On the sidelines of the Embassy’s inaugural ceremony, Minister Rabbani, Minister Kotzias, Ambassadors of the European Union and Ambassadors of many other countries based in Athens attended a special dinner reception hosted by the newly-established Afghan Embassy in Athens. Representatives from several international organisations and European countries also participated in the reception.

At the outset and after an official reception and welcome given to the Greek Foreign Minister by his Afghan counterpart, the flag of the Islamic Republic of Afghanistan was raised over the Embassy building by the visiting Minister of Foreign Affairs after a recital of the National Anthems of the two countries; and the Embassy of the Islamic Republic of Afghanistan in Greece was opened for the first time.

It should be mentioned that Afghanistan had no official representative body in Greece in the past and all diplomatic and consular affairs of Afghanistan had been carried out by a non-resident ambassador.

Diplomatic relations were established in 2004, with the Karzai Government. There is no Greek diplomatic mission in Afghanistan. There is parallel accreditation of the Greek Embassy in Pakistan. 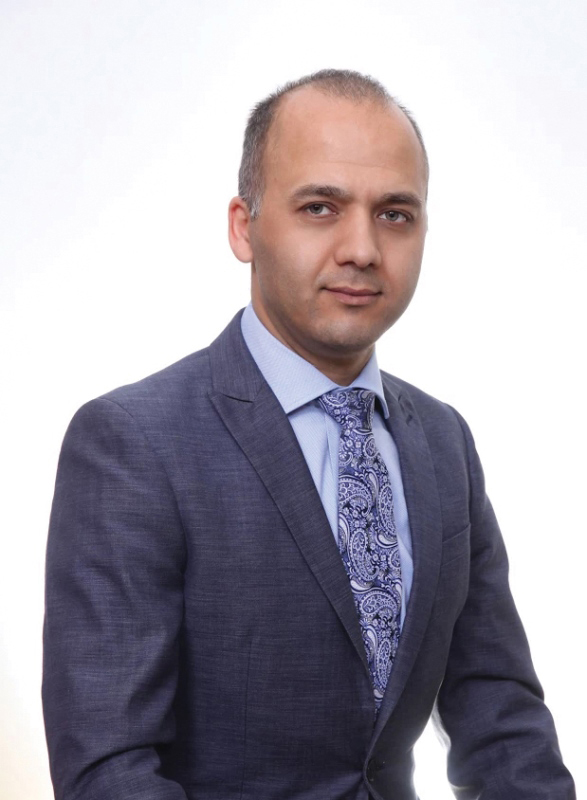 Greek Diplomatic Life magazine took this important landmark in the historical relations of the two countries to chat with the newly-appointed Chargé d’Affaires of the Islamic Republic of Afghanistan, Sarajulhaq Saraj and ask him a few questions on what we can expect now that the two countries have officially opened new channels of cooperation between their countries and their people.

GDL: Greece and Afghanistan, two countries with historical relations, are seeking possibilities to further develop bilateral cooperation. In your opinion, which sectors should both sides focus upon?

SS: Indeed, Hellenic and Afghan cultures met on the way of Ancient Hellenic civilization worldwide thousands of years ago. Since then, they have created and developed sincere bonds of mutual understanding and exchanged ideas. As an Embassy, our primary aim is to promote this long-lasting cooperation and strengthen bilateral dialogue between the two countries in order to develop interdisciplinary joint initiatives. For example, we are currently working towards building bridges between Afghan and Greek higher educational institutions, by establishing a scholarship programme and launching exchange programmes for students and researchers.

Furthermore, given its significance to the economy of Afghanistan, trade and agricultural sectors are a top priority in our agenda. Thus, we strive to increase investment in both countries, as well as initiate projects that would serve the financial markets in both Afghanistan and Greece. Last but not least, Greece has provided and continues to provide warm hospitality to the refugees fleeing from the fragile and conflicted regions of our country. We strive to further promote cooperation between the competent authorities of the two countries in order to resolve this crisis and put an end to the tragedy for these people.

GDL: Greece has openly declared the significance of improving security conditions by eliminating terrorism and promoting democratisation and economic progress in Afghanistan. Can you elaborate on what has been achieved so far with regards to these issues?

SS: Greece has been actively contributing to NATO’s operational missions. The latter assists the Afghan authorities in providing a safe and secure environment in the country, as mandated by the United Nations Security Council. Greece has also been generously financing development programmes in the agricultural sector (management of water resources), education and healthcare, and is taking part in the training of the Afghan security forces.

Furthermore, as a result of the meeting that we had here in Athens with the Greek authorities, discussions have been initiated on the signing of a contract between Afghanistan and Greece over the launch of a special training programme. Through this programme, Greek police forces will provide qualified training to Afghan police forces, strategic and tactical support, share their specialised know-how and assist them in carrying out their significant duty in maintaining public order and security on a daily basis. 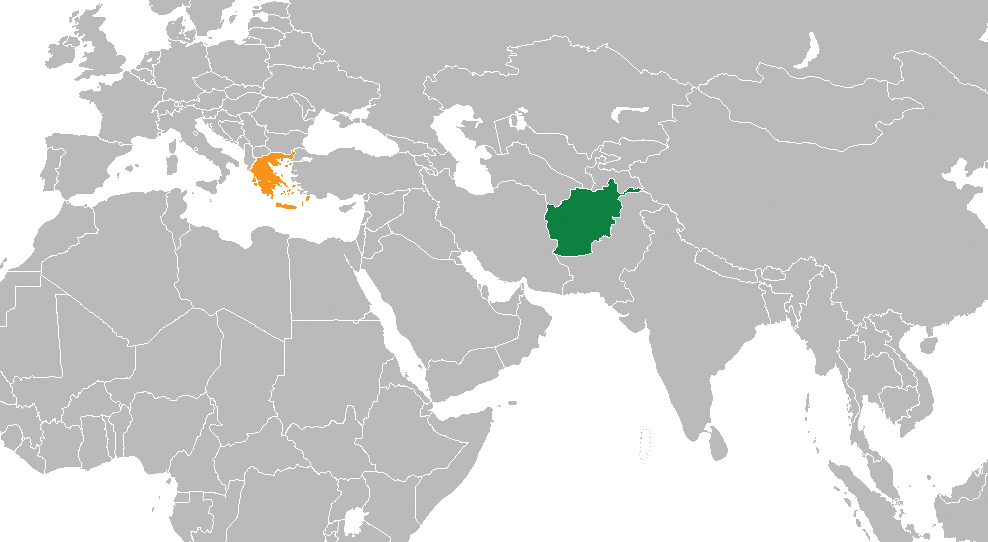 GDL: In December, relations between the two countries were further strengthened by the opening of a new Embassy of the Islamic Republic of Afghanistan in Athens for the first time. What led to this decision, what do you anticipate for the future and how will this new status help in dealing with the thousands of Afghan migrants?

SS: December 18th 2017 marked a series of historic events in the relations between Greece and Afghanistan. It was the first time that an Afghan diplomatic mission was established in Greece, thereby inaugurating the first direct bilateral relations between the two countries. Moreover, through this opening, Greece witnessed the first Official Visit by a senior Afghan diplomat, H.E. Salahuddin Rabbani, who is Afghanistan’s Minister of Foreign Affairs.

I am honoured to be the first Afghan diplomat to have ever been accredited to the Hellenic Republic. As you can understand, these ‘firsts’ are strong indicators of our decisive will to take effective action to essentially develop our relations with Greece, as well as promote the good spirit of cooperation between two key countries in regional and international spheres. We consider the establishment of the first-ever diplomatic mission of the Islamic Republic of Afghanistan in Athens as an event of historical necessity; or should I say, of historical justification; this was the incentive to proceeding with the official opening of our Embassy.

The Embassy of the Islamic Republic of Afghanistan in Athens brings new momentum to bilateral relations. It constitutes the official channel of cooperation between the two countries and its people. Personally, I strongly believe that there is the will and ability to build friendly relations and foster mutual cooperation in fields that are of great importance to both countries, as I mentioned earlier. I aspire to bolster the active collaboration between us and the Hellenic Republic in this regard.

In relation to the Afghan migration issue, I believe that my answer to your first question sets the political signal for the actions required at bilateral level in order to successfully support the hard work of all competent authorities.