President of the French Republic pays State Visit to Greece

Urgent changes needed for the continent; deepening of strong relations between Greece and France 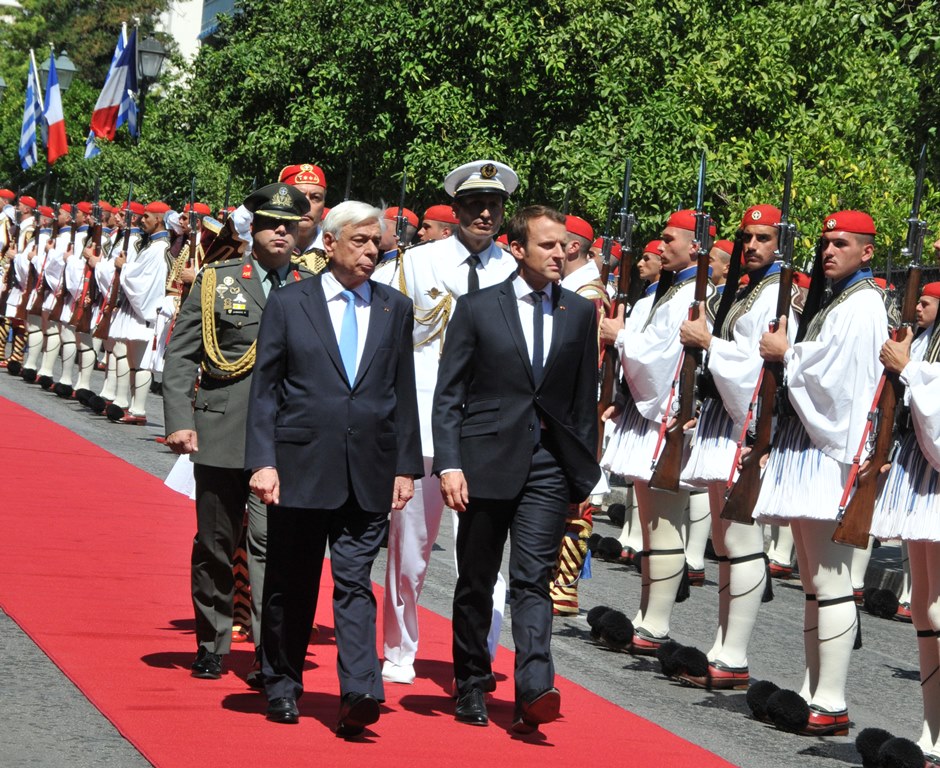 France will continue to stand by Greece’s side in its efforts to achieve economic recovery, French President Emmanuel Macron said at the beginning of a State Visit to Athens on September 7th-8th.

Heading a large delegation of Ministers and business leaders and with his wife Brigitte Macron by his side, the French leader arrived in the Greek capital to promote bilateral cooperation and exchange views on European affairs with the leadership of Greece, emphasising the cultural ties that bind Greece and France together and spelling out his idea for a more cohesive euro zone.

Alongside the Minister of Finance and Economy Bruno Le Maire and the Minister for European Affairs Nathalie Loiseau, the French mission also included business people involved in the sectors of energy, infrastructure, tourism, start-ups, finance and the defence industry.

Europe’s future as envisioned by French President Emmanuel Macron with the urgent changes needed for the continent and the deepening of the strong relations between Greece and France was at the centre of the talks between the French leader and Prime Minister Alexis Tsipras.

The talks were focused on three subjects: attracting investments in Greece, the country’s stable access to markets and the future of Europe. The two leaders also discussed EU-Turkish and EU-Russian relations, Cyprus, developments in the Western Balkans and migration.

Premier Tsipras shares, to a large extent, President Macron’s view on the future of Europe and therefore the Greek side considered this visit as crucial for the direction this dialog will take.

President Macron outlined a plan to “rebuild” the European Union through wider democracy and public accountability. He warned that “sovereignty, democracy and trust are in danger” and that its citizens no longer understand the project during his speech at the Pnyx under the Acropolis. “2,500 years ago here on the hill of Pnyx, Athenians invented Democracy…” these were the first words that French President said in Greek. 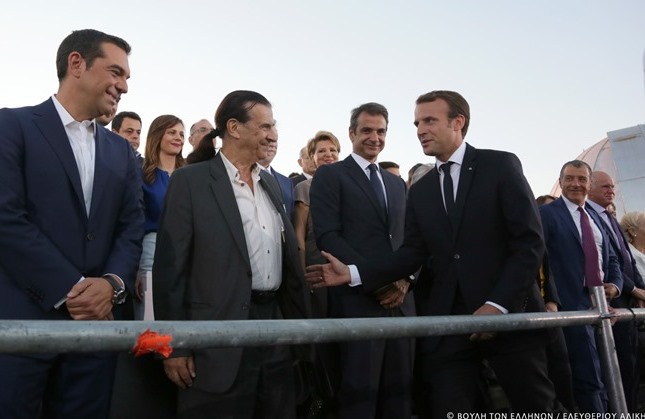 Choosing a symbol of ancient Athenian democracy for his speech, President Macron said he intended to present fellow European leaders with a “roadmap” to fix Europe for the next decade after Germany’s Parliamentary elections. He said more democratic institutions would help respond to a populist wave which has seen the rise of far-right leaders. “We share a history and a destiny… we must defend this heritage,” he said, with the spectacular backdrop of the Parthenon temple glowing in the sunset.

The French President, a dedicated pro-European, warned that the continent would face its demise without a radical overhaul of its governance. “In order not to be ruled by other bigger powers I believe in a European sovereignty that allows us to defend ourselves and exist,” he said before his assembly.

“Are you afraid of this European ambition? Our generation can choose to (do this)… we must find the strength to rebuild Europe,” said the 39-year-old Head of State of France.

The proposals, which formed part of President Macron’s election campaign platform earlier this year, will be submitted to European citizens early next year for a six-month debate. These debates – so-called ‘democratic conventions’, which he proposed during his French Presidential campaign – will help lay the foundations of Europe for the next 10 to 15 years. “I don’t want a new European treaty discussed behind closed doors, in the corridors of Brussels, Berlin or Paris,” President Macron said.

Another proposal is to give more democratic legitimacy for the eurozone. “Let us put together a eurozone Parliament which would enable the creation of democratic responsibility,” the French President said. At present, economically weak states such as Greece decry the powers wielded by eurozone Finance Ministers to determine long-term fiscal policy. Their body, the Eurogroup, is not elected.

Earlier, with Prime Minister Tsipras at his side, President Macron warned the International Monetary Fund to refrain from demanding cuts beyond those already agreed, in upcoming talks.

“The IMF’s position should be in good faith and without added requirements,” President Macron said as Greece prepares to reopen reform talks in return for another tranche of bailout cash. Greece’s third rescue programme, currently financially supported by EU states alone, runs to August 2018. The IMF has said it will only contribute to the programme if EU creditors take further steps to lighten Greece’s debt load, which has yet to happen over strenuous objections by Germany.

President Macron expressed his regret that the EU had to turn to outside assistance in the first place to rescue Greece in 2010, noting that this reflected a “lack of confidence” between European member states and institutions. “I don’t think that having the IMF supervise European programmes is a good method… the credibility and sovereignty of Europe justified doing things differently,” he said.

The French Head of State said European rescues were not the IMF’s “primary vocation” and that in Greece’s case, European Ministers spend an excessive amount of time agonising over growth forecasts 25 years into the future, at the global lender’s command. “If you could tell me my own country’s growth forecast in three years I’d be happy,” he humoured.

President Macron backed Germany’s idea of a European Monetary Fund (EMF) but stressed the ultimate goal should remain a eurozone budget. He wants a giant leap forward in European cooperation, pushing for the creation of a eurozone Finance Minister and Parliament, as well as a stand-alone budget for the currency bloc to cushion economic shocks and head off future crises.

Germany’s Finance Minister has proposed transforming the eurozone’s rescue fund, the European Stability Mechanism (ESM), into a fully-fledged EMF that would have more powers to support vulnerable member states. “We should head toward a European Monetary Fund but this should in no way be mixed up with a eurozone budget,” President Macron added. He further praised Greece’s austerity reforms and reiterated his call for an easing of the Greek debt burden.

President of the Hellenic Republic, Prokopis Pavlopoulos, said Greece supported France’s proposals for a closer eurozone. He said the ESM should be reformed and replace the International Monetary Fund in Europe. “We respect the IMF, but we can manage better with an organisation which was set up to have a European mentality and understand the eurozone’s special features,” the Greek Head of State told President Macron. 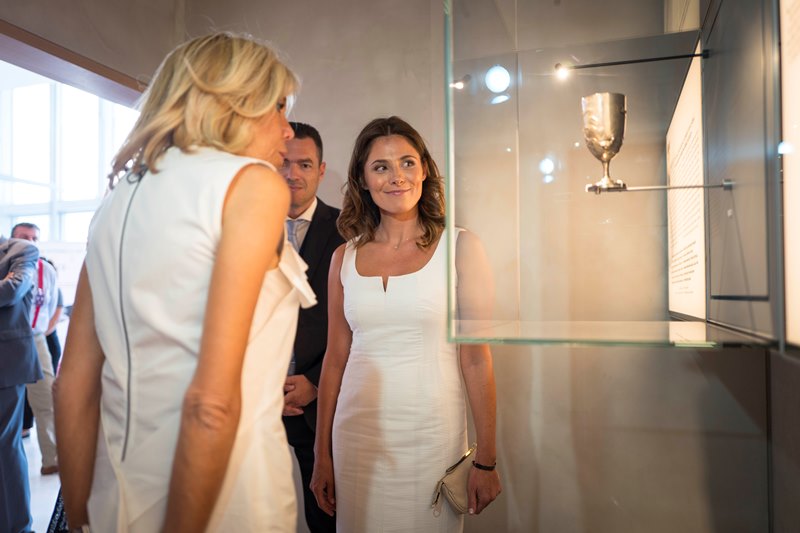 “France will continue to stand by your side… We owe it to you. Your resilience, courage and the reforms undertaken should not be forgotten,” President Macron told President Pavlopoulos as he welcomed him to the Presidential Mansion.

President Macron further praised the Greek people for their sacrifices in recent years during the official reception ceremony. Europe must not depart from its values, we must show solidarity and courage to move forward, he said.

On his part, President Pavlopoulos expressed Greece’s solidarity with the French people over the casualties caused by Hurricane Irma, and gratitude to President Macron personally and France in general for the support to Greece throughout the seven-year debt crisis. “Greece will continue to fulfil its commitments. Greece awaits its counterparts to do the same, in particular regarding the major issue of the sustainability of the Greek debt,” the Greek President stressed.

Pictured above: President of the Hellenic Republic, Prokopis Pavlopoulos, tenders an Official Ceremony to welcome his visiting counterpart, President of the French Republic, Emmanuel Macron; addressing the press with Prime Minister Alexis Tsipras; scene during the State Dinner hosted by the President of the Republic in honour of President Macron; greeting Vice President of the Hellenic Parliament Anastasios Kourakis; President Macron delivers an address at Pnyx Hill, the birthplace of the world’s first democracy; Wife of the Greek President, Mrs. Vlassia Pavlopoulou-Peltsemi, escorts Mrs. Brigitte Macron around several archaeological sites; as too, the partner of the Prime Minister, Ms Betty Batziana; President and Mrs. Macron take an unscheduled stroll around the streets to experience life inf Athens, including stopping to tip a laterna player.