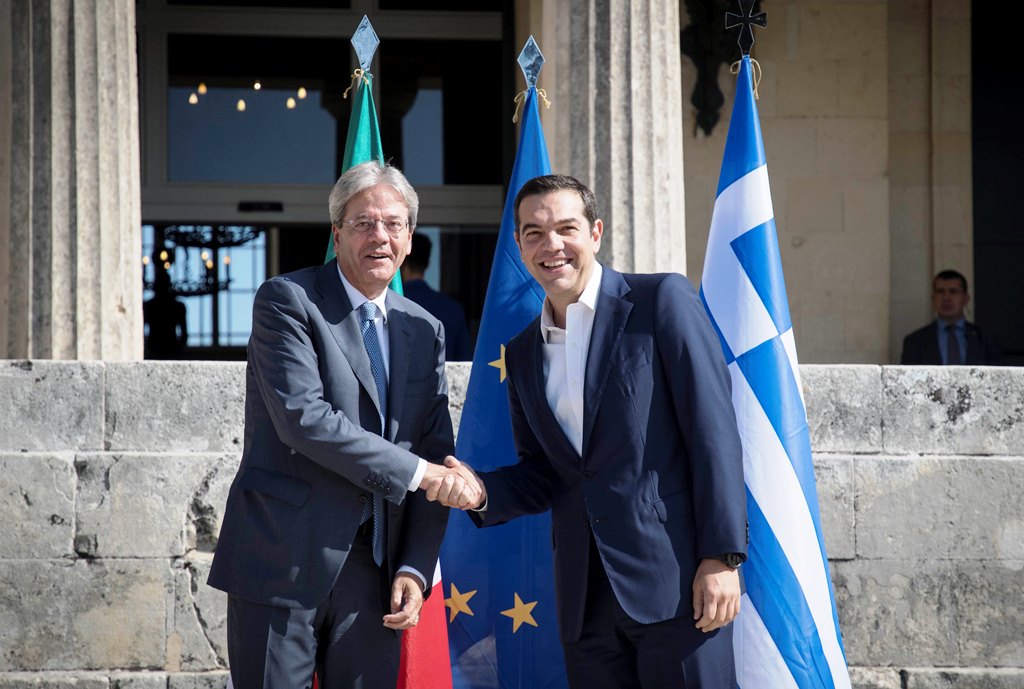 A meeting between Greek Prime Minister Alexis Tsipras and his Italian counterpart Paolo Gentiloni in Corfu opened the 1st Intergovernmental Conference between Greece and Italy, on September 14th.

This was the first official intergovernmental cooperation meeting, with the participation of ministers, secretary-generals and government officials from both countries. It aimed to lay the foundations for good cooperation between the two countries on a business and development level. 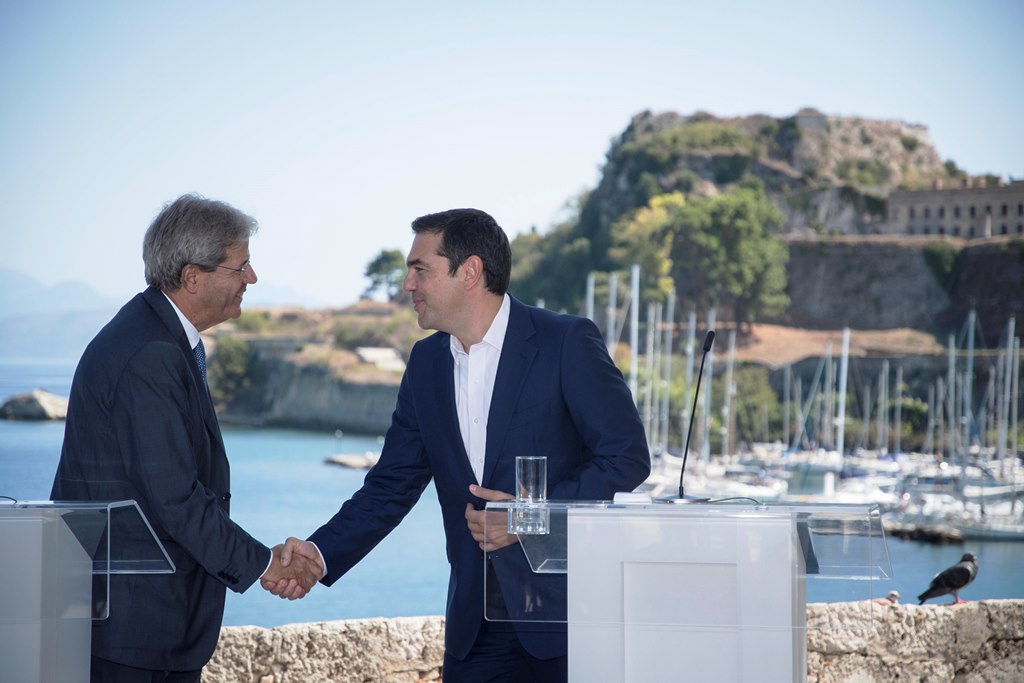 Premiers Tsipras and Gentiloni adopted a joint communiqué, which will act as a foundation for restarting Greek-Italian cooperation in a number of areas, such as Europe, economy, energy, investment and immigration.

The Italian Prime Minister expressed hope that economic relations between Greece and Italy will improve further and investments between the two countries will multiply, as he spoke following the signing of the agreement completing the sale of Greek railways company ‘Trainose’ to Italy’s ‘Ferrovie dello Stato Italiane’, in Corfu. Greece has agreed to sell its railway company to Italy’s own state-owned operator for 45 million euros as part of its privatisation drive.

The country’s Asset Development Fund said that the sale of Trainose to Ferrovie Dello Stato Italiane completed a four-year process. Ferrovie said it was ready to spend up to 500 million euros in Greece in the coming years, mainly to buy new trains, if conditions allowed it.

“Today, these relations are sealed at a very high level for both countries in this 1st High-Level Cooperation Council between Greece and Italy. Today we reiterate our strong commitment to democracy, freedom and all the values that our cultures are based on,” Premier Gentiloni said in his introduction.

“As Prime Minister Tsipras mentioned, we have excellent relations in economic and commercial terms and we are Greece’s first strategic partner in trade. We hope this relationship will evolve further, improve in the economic sector and especially in the investment sector. Today brings new areas of cooperation, with the signing of the agreement between Trainose and Ferrovie dello Stato Italiane, with further investment in infrastructure and maritime transport,” he said. “We have to multiply investments, it is the best time to do so because it changes the wider economic climate, changes for the better, we have to seize the opportunity and make it clear,” he added. 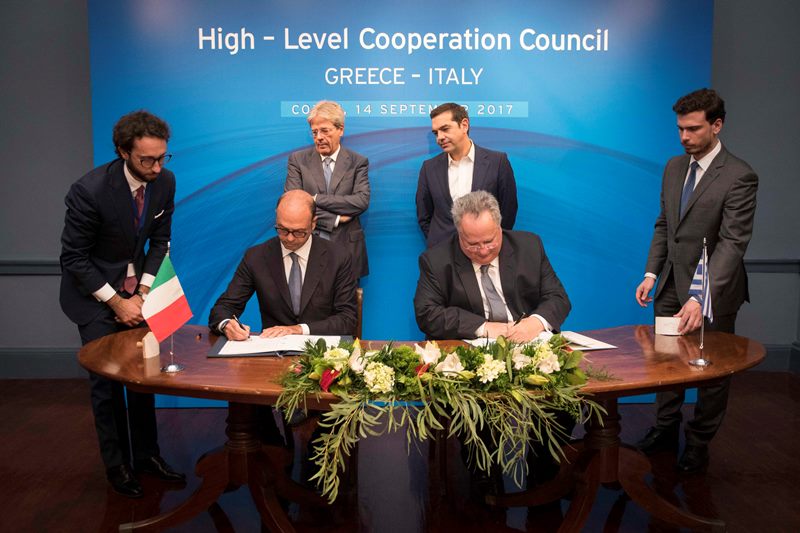 Premier Gentiloni also said the two countries signed a cooperation agreement against the illicit trafficking in works of art. At the same time, he also expressed Italy’s support for the completion of the third programme review, adding that finances in both countries are now better. “Today we can say that the European Union is much more credible for its citizens. Economic results seem to be better for both countries’ economies. Economic trends are better. This is particularly important for Greece, which was affected like no other country by the austerity and the severity of this crisis,” he noted, adding that “Today Greece is heading towards a positive conclusion of the review. The climate is more conducive to completing the programme in a satisfactory and effective way, along with the assistance and input of all stakeholders.” 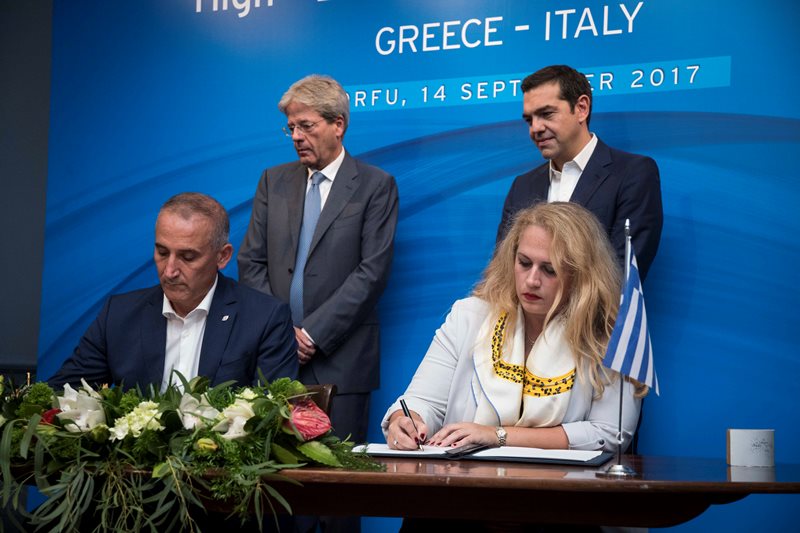 Italy and Greece gave a guarded response to EU Commission President Jean-Claude Juncker’s call for a Euro-wide finance minister, saying there was little point in creating the job just for the sake of it. Speaking in a joint news conference, Italian Prime Minister Paolo Gentiloni said his country had been in favour of such a project for years. But “a finance minister must create opportunities,” he said in translated remarks at a news conference, “it is not enough to create a job”.

In his annual state-of-the-union speech, Mr. Juncker proposed that the EU create its own Europe-wide finance minister, a big step towards deeper integration of the eurozone. The proposal matches a similar demand by French President Emmanuel Macron, who says he believes that the eurozone needs stronger institutions in order to avoid shocks such as the debt crisis or Brexit.

Premier Gentiloni called for “concrete steps” towards strengthening economic and banking cooperation in Europe, saying “big opportunities” were coming the EU’s way in those areas. But he said democratic mechanisms were needed to accompany any future eurozone finance minister post, and the “political and economic intentions” behind such an appointment had to be clear.

Greek Prime Minister Alexis Tsipras told during the conference that there was no need for any finance minister if the job was simply to watch over compliance with eurozone convergence criteria. “A finance minister who would just be a policeman punishing unruly members would bring nothing new to the table,” he said.

In his speech, Mr. Juncker, who said the EU was emerging from years of crisis, also called on the EU to conclude more trade deals, create the post of EU president, expand the passport-free Schengen area, take the lead in the fight against climate change and keep a closer watch on attempts by foreigners to take over strategic European companies.

The prime ministers of Greece and Italy have also stressed that European countries should share the burden of dealing with migration. Mediterranean countries must “find a way to act decisively, taking a leading role in this debate and in developments,” Premier Gentiloni said. The Greek Premier, for his part, noted that refugee crises should be handled with solidarity and a shared sense of responsibility, not with “fences and exclusions that undermine our European values.”

The Italian Premier called for a change to European regulations on migration “because it is only fair that the weight does not only fall on just some countries.” “This is the message that we will also bring to the meeting in Nicosia in October,” he said, referring to a conference of seven Mediterranean countries scheduled to take place in the Cypriot capital on October 10th. “The message must be to update the rules we have because it is fair to stress once again that the burden of this phenomenon cannot be taken only by few countries such as Italy and Greece,” he said.