President of the Republic receives Royal welcome in Riyadh 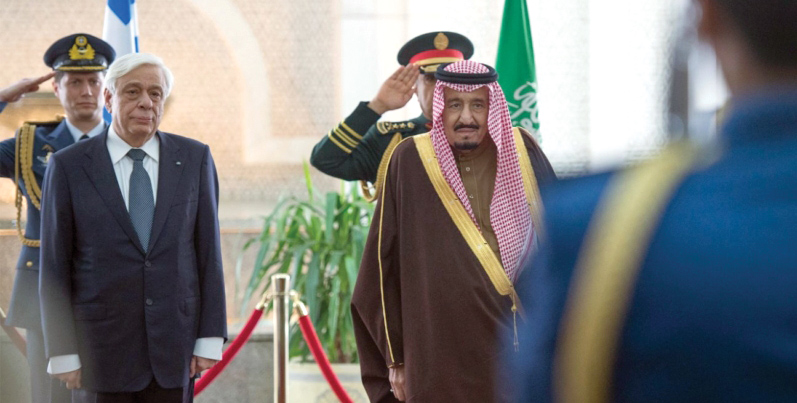 The Official Visit of the President of the Hellenic Republic Prokopis Pavlopoulos to Saudi Arabia paved the way for reigniting a new era of bilateral relations.

The visit of President Pavlopoulos to Riyadh included a series of meetings with King Salman bin Abdulaziz Al Saud, Cabinet Ministers and top officials. The meeting with HRH King Salman took place in a very good climate, with the Royal dignitary later hosting a dinner in honour of the visiting President. 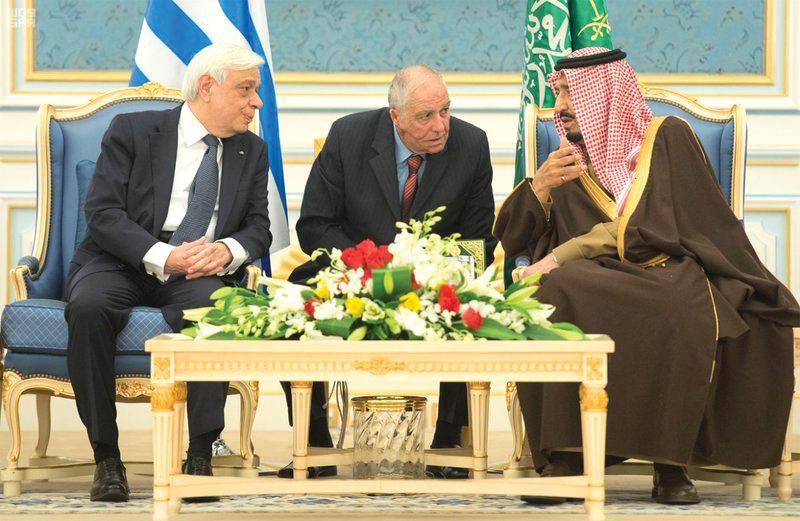 During his meeting with Saudi King Salman, President Pavlopoulos spoke about the role that Saudi Arabia could play in ensuring peace in the region and combatting terrorism, as well the country’s long economic relations with Greece. In this meeting, he was accompanied by Foreign Minister Nikos Kotzias, Shipping Minister Panagiotis Kouroumblis and Alternate Foreign Minister George Katrougalos. “In this new period of relations with Saudi Arabia, Greece enters as a member-state of the European Union, located in a very sensitive region of the Mediterranean. The cooperation is not just economic. Saudi Arabia is a country that plays a central role within the Arabic countries. Its role is strengthened by its stability. Therefore it can play an important role in the consolidation of peace in the region and in combatting terrorism,” President Pavlopoulos said. 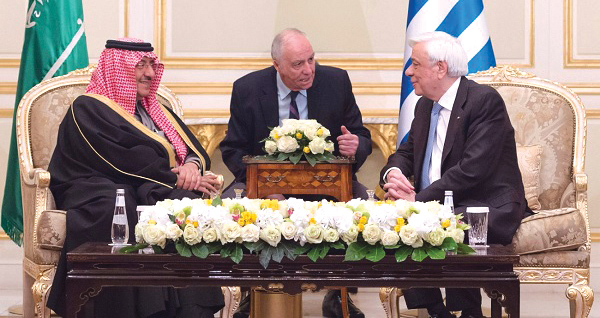 He also met with the Crown Prince and Interior Minister Prince Mohammed bin Abdulaziz Al Saud, the Minister of Energy and Mineral Resources, which controls the oil sector, with the Foreign Minister, the Minister of Investments and Transport Minister. The President also met with the Secretary of the Cooperation Council of the Gulf countries with whom he discussed issues concerning the relations between the Gulf countries and Europe and particularly Greece. This meeting was also attended by Foreign Minister Nikos Kotzias, who invited the Secretary of the Council of the Gulf countries to Rhodes where an intercultural conference will take place. Then he visited the National Museum of Riyadh where he was welcomed by the Tourism Minister of Saudi Arabia, Prince Sultan bin Salman Al Saud.

The Greek Head of State and his accompanying delegation also visited the King Abdulaziz City for Science and Technology (KACST), where he met KACST President Prince Turki bin Saud bin Mohammed. Here the president was briefed on activities and research projects. 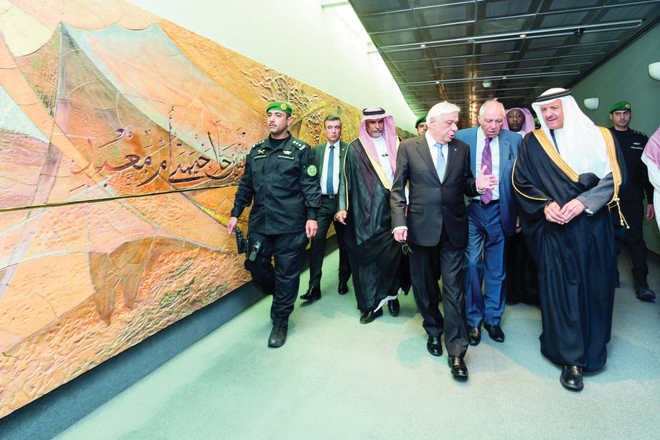 An agreement on satellite applications was signed between Prince Turki and Minister Kotzias. Prince Turki and Alternate Foreign Minister George Katrougalos, responsible for international economic relations and foreign trade, signed a further accord on scientific and technical cooperation.

The 4th Session of the Joint Ministerial Committee of Greece – Saudi Arabia was held a day prior to the President’s visit. This was co-chaired by Alternate Foreign Minister George Katrougalos alongside Prince Saud bin Khalid Al Faisal.

Reigniting the joint ministerial committee was of crucial importance, having met last in 1999. Diplomatic relations between Greece and Saudi Arabia started as early as 1926. The first Greek Embassy in the Kingdom was established in Jeddah in 1943, but in 1963 the Greek Embassy was moved to Riyadh, where it became operational in 1985. 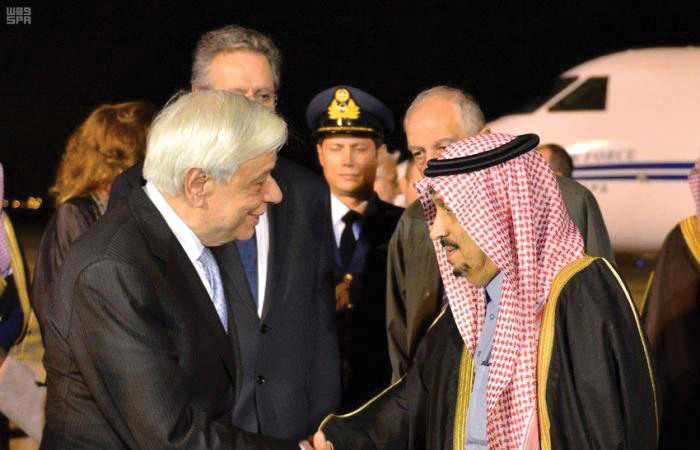 Greece has a longstanding relationship with the Arab world and Saudi Arabia in particular. It has been a holiday destination for Saudis since the arrival of King Saud in the coastal Athens suburb of Kavouri in the late 1960s. Many Saudis have fond memories of honeymooning in Greece in the 1970s and 80s. And the new generation, of which 70% are below the age of 30, are now flocking to the Greek islands.

Greece has traditionally maintained strong ties with the Arabs. It was, for example, the only European state to vote against the partition of Palestine in the United Nations General Assembly in 1947, and since then it has consistently backed the Palestinian cause. Yet, there were also economic factors behind the Greek-Arab relationship. By the 1970s some Greek companies had achieved a prominent role in the Arab world where they were executing significant construction projects. Furthermore, the Arab markets were important for the export of Greece’s agricultural products. The Arab world continued to be the second largest export market for Greece (after the European Community) throughout the 1980s and the first half of the 1990s. 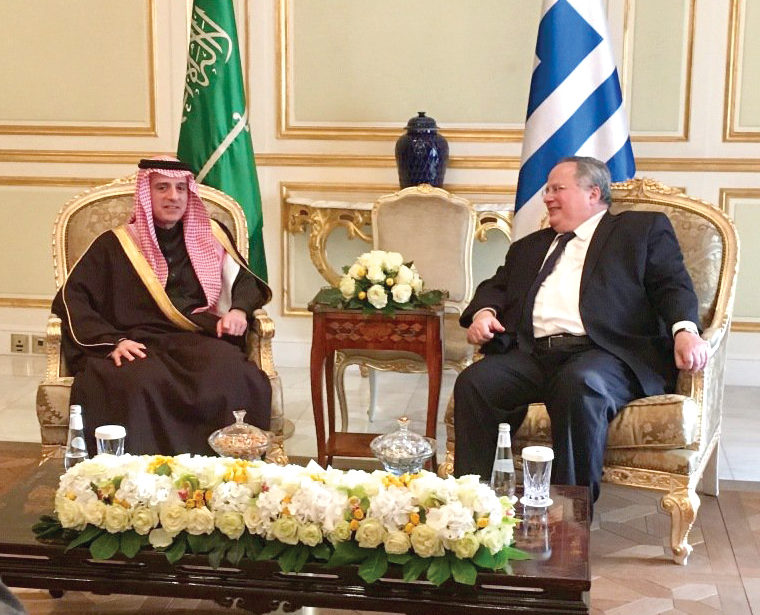 Tourism offers plenty of investment opportunities in Greece. The country combines a stunning landscape, hospitality, as well as excellent climatic conditions for tourism throughout the year. For this reason, more than 22 million tourists annually opt to travel to Greece for holidays. Saudi investors have been one of the largest equity participants in tourism over the last three years. The Athens Hilton Hotel (2016), Costa Navarino resort (2014), as well as Astir Palace (2016) in Vouliagmeni, are recent notable investments by Saudi investors. Many Saudis have invested over the years in real estate, benefiting from the right to receive a residence permit should they own a 250,000-euro real estate asset or have signed a 10-year timeshare contract.

Potential investment areas in Greece extend beyond tourism too. Some Saudi investors have a strong and historic presence in Greece. The next decade in Greece is set to see sustained growth in tourism, information and communications technology, energy, environmental sciences, food, beverages and agriculture, logistics and life sciences. Greece’s exceptional human capital, advanced infrastructure, geostrategic position and potential for economic expansion are attracting investor interest from around the world. And Greece’s newly-designed investment framework supports the creation of new businesses, new synergies and new partnerships.

Over the last year and a half, Saudi Arabia has embarked on the most pivotal economic reform programme in its 85-year modern history. Vision 2030, announced less than a year ago, has set the Kingdom apart from any emerging market economy, outlining a specific and much needed road-map far beyond the oil era. Saudi Arabia is the largest free market economy in the Middle East and North Africa, with a 25% share of the total Arab gross domestic product. The Kingdom’s geographic location provides easy access to export markets in Europe, Asia and Africa of more than 450 million consumers. It has a continuously expanding domestic market which is adding to a young and consuming population with strong buying power. The Saudi Riyal is one of the world’s most stable currencies, with no critical changes in its exchange rates during the last three decades. Saudi Arabia permits the transfer of capital and profit abroad.

There are possible synergies that could be deepened. Saudi Arabia is heavily investing in defence and security. Its view of security is not limited to traditional arms purchases and defence alliances. Riyadh sources 98% of its annual defence expenditures from foreign suppliers. Under Vision 2030, Saudi Arabia plans to ‘localise’ half of its arms purchases domestically within 13 years.

Both countries can also explore ways to ensure food security, as well as investing heavily in agricultural land in Greece.

The location of the Gulf is crucial for eastbound flights to destinations such as Australia, home to the second largest overseas Greek population. Many skilled Greeks with degrees in engineering and medicine are working in Saudi Arabia. Economic diplomacy is the core characteristic defining bilateral relations between the two countries. Greece’s economic crisis requires it to search for new markets, while Saudi Arabia’s diversification efforts can be strengthened with a trusted partner that is less than three hours away by plane. 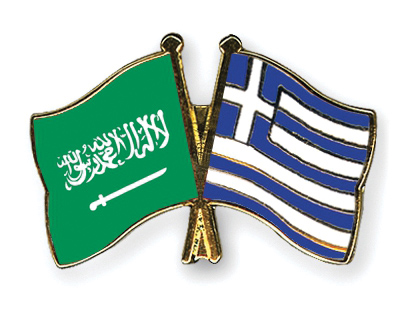 Pictured above: HRH King Salman bin Abdulaziz Al Saud officially welcomes President Pavlopoulos to Saudi Arabia; pictured in discussion; the Greek Head of State with Crown Prince Mohammed bin Naif bin Abdulaziz, Deputy Premier and Minister of Interior. Left: with Prince Sultan bin Salman, President and Chairman of the Board of the Saudi Commission for Tourism and National Heritage; with Prince Faisal bin Bandar al-Saud, Governor of Riyadh; Foreign Minister Adel bin Ahmed Al-Jubeir and his Greek counterpart, Nikos Kotzias, had much to talk about, including the agreement on satellite technology and its applications signed between Prince Turki and Minister Kotzias and the Joint Ministerial Committee between the two Governments which gave the two sides the opportunity to agree on many pending issues.