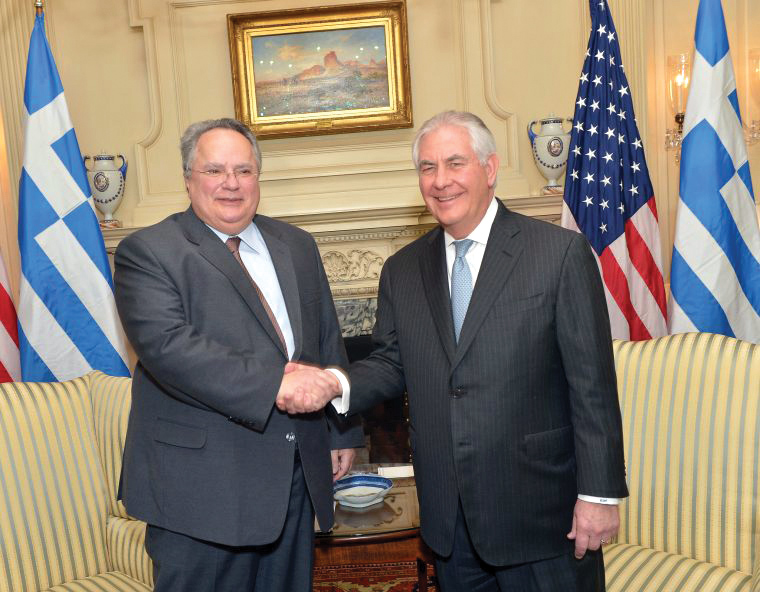 Greece is a beacon of stability in the region

The Greek Foreign Minister met on March 13th with his American counterpart Rex Tillerson in Washington. Their talks focused on the important role Greece can play as a pillar of stability in a volatile region and its prospects as a regional energy hub, as well as in the geostrategic movements in Southeastern Europe and the eastern Mediterranean.

Diplomatic sources said that Greek-Turkish relations were raised and Minister Kotzias referred to “Turkey’s nervousness” with regard to the recent escalation of incendiary remarks emanating from Ankara. But relations with Turkey were not the focus of their talks, as the Chief of the Hellenic Diplomacy opted to highlight the overall strategic advantages Greece can offer the US, such as in the field of energy, which was reportedly discussed extensively.

Minister Kotzias told journalists after the meeting that Secretary Tillerson “wanted our analysis on how there can be stability and security in the region, which forces are active and how.”

More specifically, the Greek Foreign Minister presented his counterpart with a map of the wider Eastern Mediterranean and the Balkans, pointing out Greece’s value as the most stable country in the region and a valuable asset for Europe’s energy security. 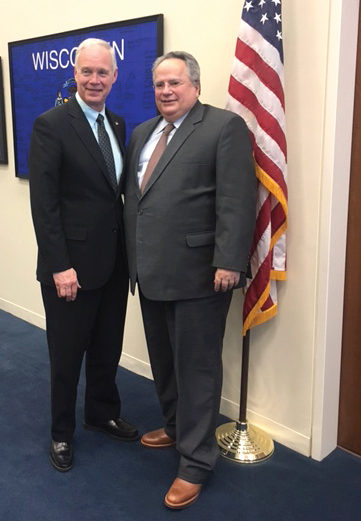 He also elaborated upon Greece’s initiatives in the past two years regarding tripartite cooperation, such as the Rhodes Summit. Minister Kotzias further referred to energy projects in the area and underlined how important it is for Greece to become a centre of transport of various energy forms. He also referred to other projects, such as the creation of road and railroad networks that ensure stability in the area. “The energy, railway and university networks are for us, above all, networks of stability and then networks that produce economic profit,” he told journalists.

Replying to a question about his view of the new US Administration’s priorities in the region, Minister Kotzias said, “I can see that the US Administration is looking for ways to upgrade the role and importance of American foreign policy, in cooperation – as far as I understand, in a different way than in the past, more intensive and equal – with states with which it has very friendly relations.”

Minister Kotzias said the Skopje issue was not discussed, but he spoke generally about the instability in Greece’s northern neighbours and Greece’s efforts to stabilise them.

Greece’s role in a fragile geopolitical circumstance and in a regional instability triangle, as well as security issues in the Middle East, the eastern Mediterranean and the Balkans dominated the 90-minute meeting between Foreign Minister Nikos Kotzias and the National Security Advisor of the US President, Lieutenant Herbert Raymond McMaster in Washington on March 14th.

“The particular role of our country is that of responsibility,” stated Minister Kotzias after their meeting, within the scope of his Official Visit in the US. The talks between the two officials focused on Greece’s role in the midst of a fragile geopolitical situation and within a regional instability triangle, as well as on issues of security in the Middle East, the eastern Mediterranean and the Balkans.

Minister Kotzias referred to Greece’s significant role in the region and the initiatives taken to stabilise the climate. “We have set up a number of institutions and we have strengthened relations with countries such as Egypt, Israel, Lebanon, Jordan and Palestine. We have the quadripartite meetings in the Balkans, as well as cross-border cooperation, while we are about to enhance cooperation with Georgia and Armenia and to showcase the special role that Greece can play in the region,” he underlined. Moreover, Minister Kotzias stressed that the US side recognised Greece’s special role.

Regarding the Cyprus issue, Minister Kotzias said that they didn’t spend much time on the Cyprus issue, beyond his explaining what the condition is for successful negotiations. “The condition is the definition of the Cyprus problem; that is, Cyprus’s being rid of foreign troops and Turkey’s understanding that it cannot ask for special privileges, like the rights of intervention it wants,” the Greek Minister stressed.

When asked from journalists about the US’ support to Greece regarding the economy and the country’s debt, Foreign Minister Kotzias expressed his view that “the support will continue and may even grow”. Regarding Turkey’s conflict with EU countries, he stressed once more that Turkey is showing its nervousness. “Perhaps certain circles in Turkey think that such verbal conflict might benefit Mr. Erdogan’s election campaign,” he added. 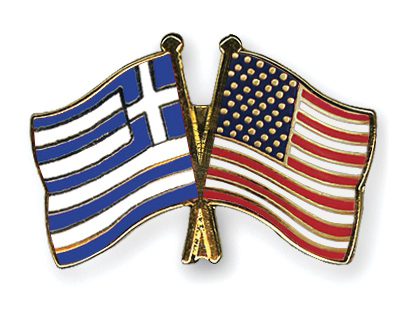 Lezanda: US Secretary of State Rex Tillerson had much to discuss with visiting Foreign Minister of Greece, Nikos Kotzias; the Head of Greek diplomacy pictured during his meetings with Senators Ron Johnson (Wisconsin); Bob Menendez (New Jersey) and Chris Van Hollen (Maryland).

Previous “In Greece I found someone who fully shares my view,” says Maltese PM
Next President of the Republic receives Royal welcome in Riyadh