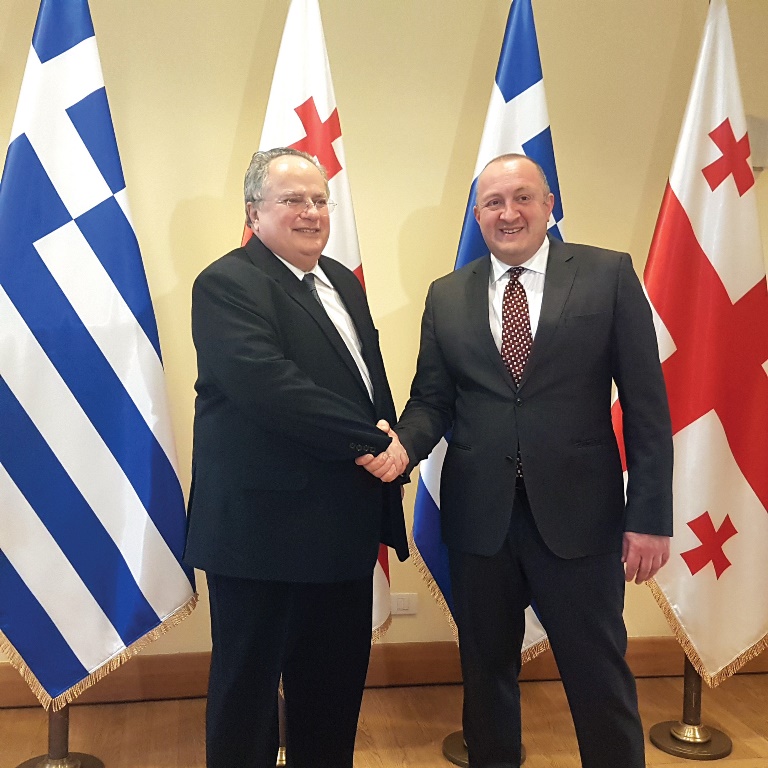 Relations between Greece and Georgia are strategic

Foreign Minister Nikos Kotzias paid a two-day visit to Georgia where he met with President of Georgia Georgi Margvelashvili, Prime Minister Giorgi Kvirikashvili, President of the Georgian Parliament Irakli Kobakhidze and his counterpart Mikheil Janelidze. During his stay, the Greek Foreign Minister also held a lecture at the State University of Tbilisi.

At a joint press conference with his Georgian counterpart, Minister Kotzias said: “I think what we agreed on and reaffirmed is important: that the relations between Greece and Georgia are strategic. Strategic relations mean that both of us will try to deepen our relationship in all sectors: in education, economy, research, energy and other fields. A strategic relationship means that we will do whatever we can to bring Georgia closer to the European Union and to transfer to you our experience and knowledge, as an old member of the European Union, and that we will also learn from you, from your experiences.

“I wanted to congratulate you – though it is a small step, it is nevertheless a step – on the waiving of Schengen short-stay visa requirements for the citizens of Georgia. We hope that this imparts momentum to tourism between the two countries, because there is really beauty and beautiful people in both Georgia and Greece.” 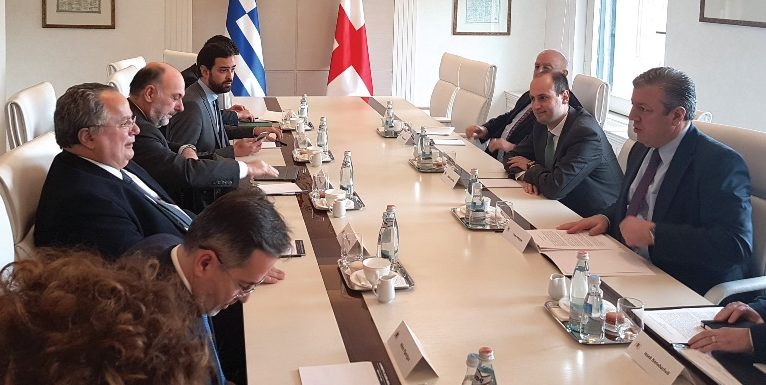 Minister Janelidze added that “we talked about our multifaceted collaboration and we decided that everything that concerns these relations in the sectors of culture, economy, energy, transport, science and education will be discussed on the level of the competent agencies and on the level of the Foreign Ministries of Georgia and Greece. We also talked about bilateral and trilateral cooperation that can be set up between Georgia, Greece and other sides.” 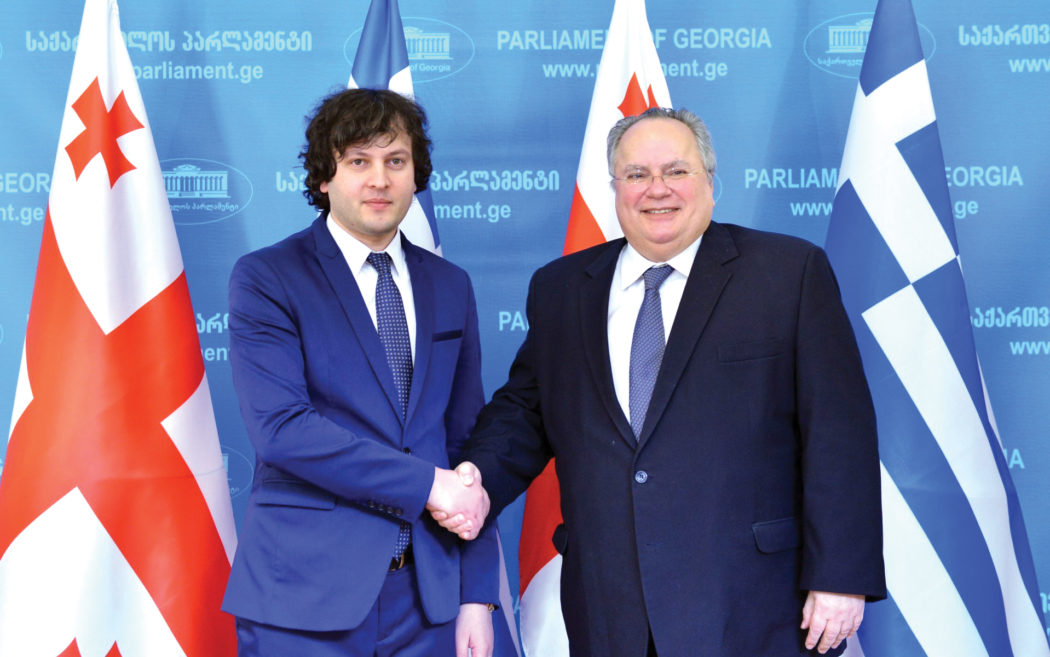 The Georgian Foreign Minister mentioned that, “on our course towards association with the European Union, we are very pleased at the help we have received from Greece. Today we talked about the next steps in this association, about the liberalisation of the Schengen short-stay visa regime for Georgians. It is very, very significant that the European Commissioner Dimitris Avramopoulos is Greek and has contributed significantly on this issue. We talked about many issues, about ways in which we can deepen our relations, import good practices from Greece, so that our citizens, too, can profit from our cooperation.” 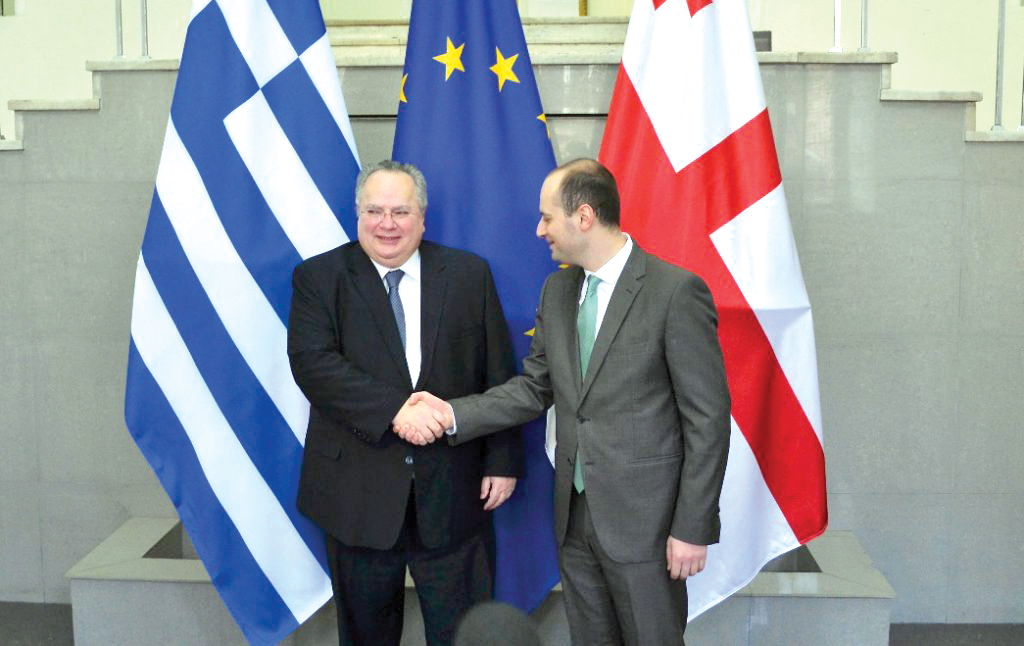 He also pointed out that, “we talked about the territorial integrity of Georgia, and about the need to resolve these problems in a peaceful manner and, of course, within the framework of International Law. Greece and Georgia will do whatever is in their power to ensure more potential for cooperation, peace, stability, and to maintain the level of our bilateral and multilateral relations. Finally, I invite entrepreneurs from Greece, stating that we are ready with everything necessary to support them in various sectors, such as energy, tourism and communications. We are ready for synergies to be created between Georgian and Greek companies, for trade relations between the two countries to be strengthened, and for Georgian and Greek companies to set up franchises in each other’s country”.

The last round of political bilateral political consultations of the Foreign Ministries of Georgia and the Hellenic Republic took place in February, in Tbilisi between MoFA Political Director Petros Mavroidis and Deputy Foreign Minister Vakhtang Makharoblishvili.

The two sides discussed a broad spectrum of bilateral cooperation and noted with satisfaction the busy schedule of high-level visits between the two countries in 2017, paying special attention to the importance of the current visit of the Greek Foreign Minister to Georgia, paying special attention to the upcoming 25th anniversary of establishment of diplomatic relations between the two countries. 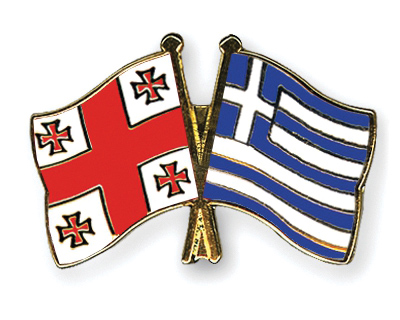