EU Parliament Speakers Debate on the Future of Europe 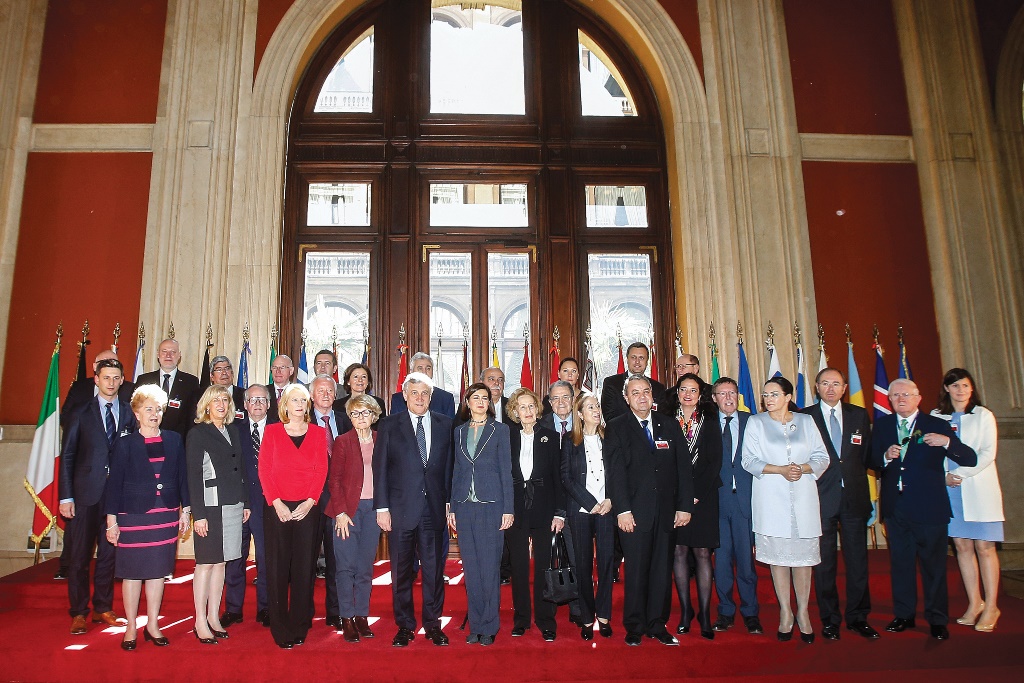 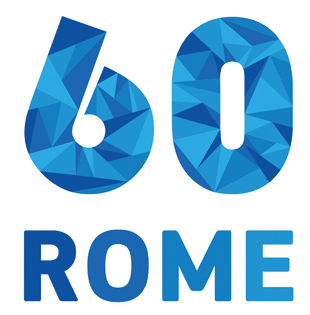 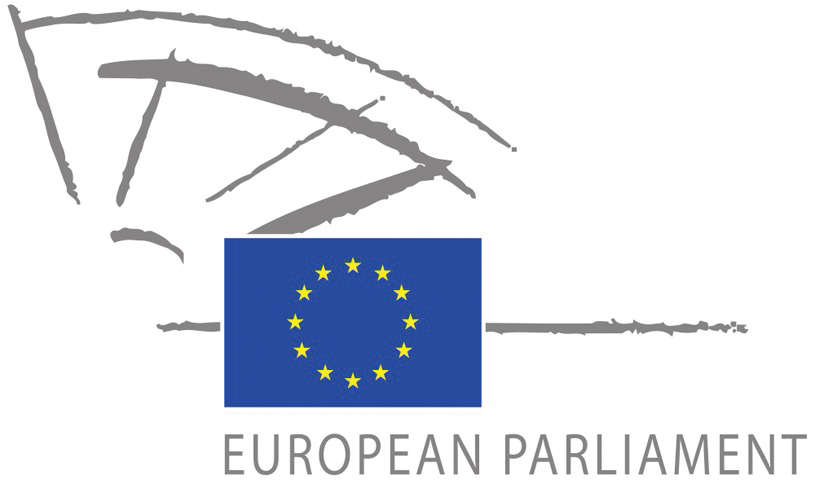 President of the Hellenic Parliament Nikos Voutsis visited Rome to participate in the extraordinary meeting of EU Parliamentary Presidents held for the 60-year Anniversary from the signing of the Founding Treaty of Rome. The Conference took place on March 16th-17th and was hosted by the Italian House and Senate.

“The European Union is facing a growing and chronic lack of democratic legitimacy of institutionalised and informal institutions and processes,” said Mr. Voutsis in his speech, further expressing the need for “a reestablishment of the vision and the status of the EU.” He stressed that the plan for the EU to exit the crisis “must not overlook the founding principles that recognised the parity of the same rights of Member States.” 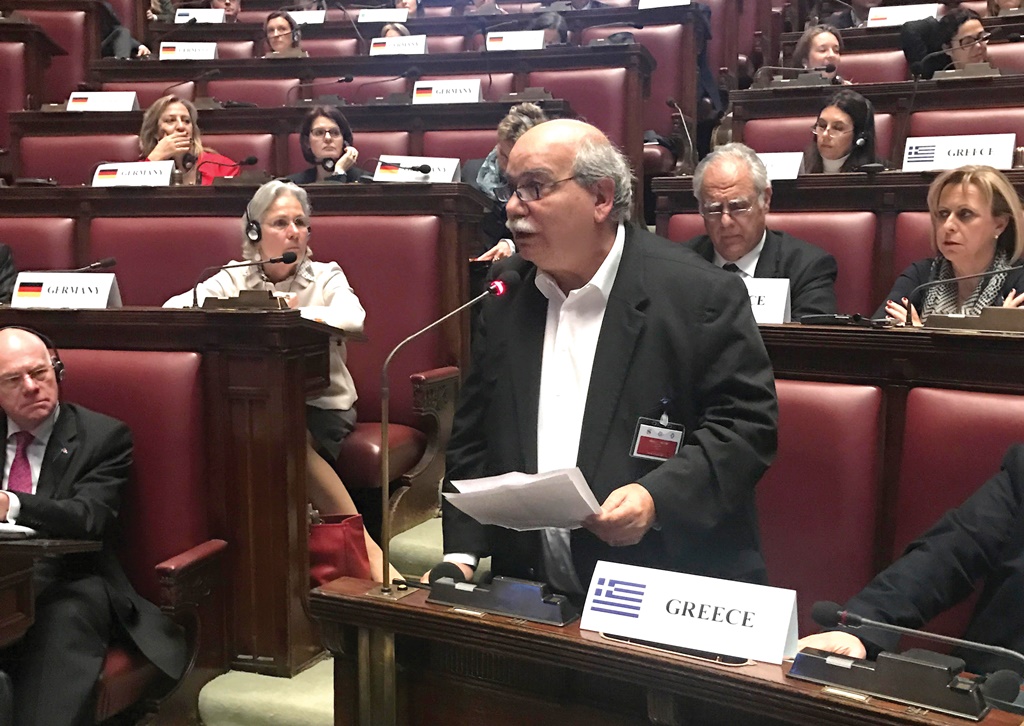 “Our presence in Rome focuses on the ascertainment that more radical and in depth approaches to the reforms and the re-foundation of the European Union are necessary. To gain a larger democratic legalisation, which has shrunk to abolition in the conscience of a large part of the people of Europe, as well as in addressing the current economic, institutional, refugees and other matters as issues of international relations. We don’t need a superficial approach on how better Europe can become if it continues to exist. An in-depth discussion on the agreements and the EU Treaties should be held with focus on a new architecture that will give an increased democratic legalisation. This is the message we want to give, as a country that is in a seven-year restrictive memorandum policy and has problems arising from the strategy of extended austerity, but also as a country which is a pole of stability in a sensitive geopolitical region,” the Speaker of the Hellenic Parliament stressed. 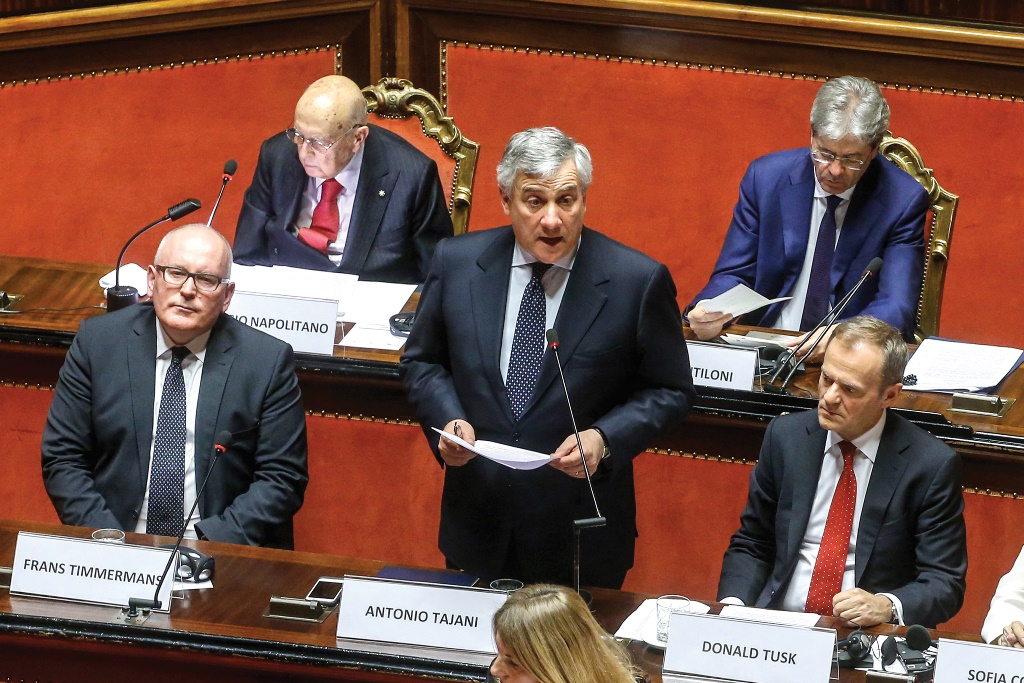 “The European Union is facing one of the most difficult moments in its 60 year history. Many of our citizens feel that Europe has lost its way, a feeling reinforced by the general climate of uncertainty both inside and outside the EU,” said President Antonio Tajani opening the Conference, adding that, “Europe is much more than a single currency or a common market. We must restart Europe on this premise. We cannot limit ourselves to a formal ceremony to mark the best 60 years in the history of a free Europe. The Anniversary of the signature of the Treaty of Rome is an opportunity to bring Europe closer to the citizens through concrete responses to their concerns like unemployment, terrorism and migration, by promoting our values in the world.”

“Today more than ever we need to show that these challenges can only be overcome if we are united. United in a Europe that produces results: reducing unemployment, managing migration, guaranteeing security, promoting stability and upholding its values in the world,” added President Tajani.

“Cooperation between the European Parliament and national Parliaments is increasingly vital if we are to achieve this. We have all been directly elected by the peoples of Europe, and we must therefore take the lead in the efforts to close the gap between our institutions and our citizens,” he added, highlighting that, “All of us representatives of the peoples of Europe have a great responsibility: to display strong political will and leadership to enact the values which bring us together. Europe is a success story when it embodies a dream of progress, prosperity, freedom and peace. It is up to us to change the image of an abstract, inefficient and bureaucratic Union and renew the passion of Europeans for this great project.”

European Council President Donald Tusk addressing the conference said that it is a political allegory of the struggle of democratic institutions against populism and the triumph of one over the other.

“Cicero said, ‘Freedom is participation in power’. Even the ancient Greeks and Romans wrestled with the problem of what it truly means to be free. Sixty years ago, statesmen from six countries decided that the only true freedom was the freedom to act together. In other words, sovereignty meant having a seat at the table. Of course, everything looks more noble, deliberate and calculated from today’s perspective. There is a tendency to remember those who signed the Treaty of Rome as political geniuses and evangelists of a United Europe. The truth is that they were leaders with their own private doubts, under incredible pressure from events and in a state of profound vulnerability. The collective powerlessness of Europe after the Second World War forced them together. The alternatives were extremely unattractive. And the horrors of the war’s destruction were still clear to see every day,” he added.

“The vulnerability of these frightened European countries gave them the humility, clarity and great wisdom to come together to sign the Treaty of Rome. That began a process that has since brought that when Europe is weak, her individual countries will be weak. If Europe is strong, her Member States are strong. Only by being united together, can we realise our own sovereignty – be truly free – in the wider world. That was true then, and it is true today. It will be true in another 60 years,” the EU Council President marked, stressing that, “the Treaty of Rome has triumphed, also because it was created and delivered by Governments based on democratic consent. National Parliaments – of which you are the representatives – therefore lent their powers to the European community with a message: ‘Please deliver in our common interest’. This was a loan which has since been repaid with interest, even if there are disappointments and delays”. 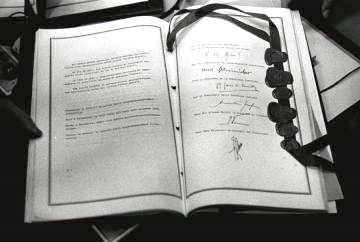 “Someone said once ‘Europe is like a tree. It grows every day but you never see it growing’. It is a rather romantic sentiment, but still true. From the seed of the Treaty of Rome grew changes that have altered the world around us so much, that most people can no longer remember what things were like before. The Treaty gave us open minds and open societies. And of course the world’s largest market for our prosperity. As a young man growing up under the shadow of the Iron Curtain, these things were almost impossible for me to imagine, although I had my dreams that one day they could happen.

“The best response to such tough times is to recapture the humility, clarity and the wisdom of the original signatories. Only then can we make the right choices about the future. Because the past teaches us that Europe is at its best and most creative when it is at its most vulnerable, however paradoxical it may sound. It delivers much more with modest, patient ambition than with grand visions”, President Tusk pointed out.

The debate on the future of Europe was launched in February with the adoption of the three European Parliament reports – Verhofstadt, Bresso/Brok and Berès/Böge – followed by the Commission’s White Paper and the discussion at the last European Council. In its White Paper on the Future of Europe, adopted on 1st March, the European Commission maps out the drivers of change in the next decade and presents a range of scenarios for how Europe could evolve by 2025. In doing so, it starts a debate that should help focus minds and find new answers to an old question: What future do we want for ourselves, for our children and for our Union?

European Union Heads of State or Government further met in Rome on 25th March for an extraordinary European Council, 60 years after the signing of the Treaty of Rome, which led to the establishment of the European Economic Community (EEC) on 1st January 1958.