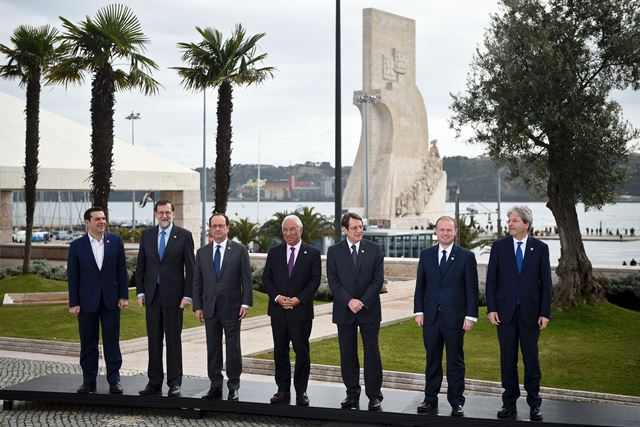 The Heads of State and Government of Cyprus, France, Greece, Italy, Malta, Spain and Portugal, meeting in Lisbon for the second Southern EU informal summit, adopted a declaration in which they confirmed the “aim of enhancing our cooperation and of contributing to a strong and united European Union”.

The Declaration followed the second-ever meeting of the ‘Club Med’. The initiative was started by the Greek Prime Minister Alexis Tsipras, who hosted its previous meet in Athens four months ago.

Ahead of the Lisbon summit, Portuguese Prime Minister Antonio Costa called for urgent reform in the EU to fight the “legitimacy crisis which is weakening it,” specifically noting the rise of “protectionism and populism.”

The delegates discussed a joint approach to boost economic growths and counter the fallout of Brexit, as well as handle the change of US policy.

The gathering was part of a Prime Minister Tsipras-launched push to balance the influence of the richer EU nations in the north. The actual impact of the group, however, might be weakened by severe internal issues facing nearly all of the seven nations.

Portugal, Italy and Greece are suffering under the largest debt loads in Europe, with Greece still struggling to meet the terms of its third bailout. France’s Francois Hollande has decided not to run for re-election this year, and many observers fear that the far-right Marine Le Pen might end up taking office in Paris. Italy is also likely to hold elections in 2017.

President Hollande used the summit to call for a united European front to stand up to political developments in the US. Europe, he said, must resist the US President’s calls to deny climate change and bar access to refugees. “When there are statements from the US President about Europe and when he talks about Brexit being a model for other countries, I think we must respond,” the French President told reporters on the sidelines of the summit.

Cypriot President Nikos Anastasiades met in Lisbon on the sidelines of the summit with Premier Tsipras for the first time since the Geneva conference on Cyprus and discussed the issues of security and guarantees.

During the meeting, President Anastasiades informed the Greek Prime Minister of the latest developments in the Cyprus problem and exchanged views on the current state of play in the talks, with particular emphasis on issues of security and guarantees, as well as Turkey’s unacceptable demands for concessions regarding the four basic EU freedoms for Turkish citizens in a reunified Cyprus, within the framework of solving the Cyprus problem.

President Anastasiades addressed the summit informing delegates on the state of play with regards to the Cyprus negotiations.

The President was said to have referred in particular to the EU’s presence at the conference in Geneva and the expressed position of both the EU and other member states, that the most effective guarantee for the safety of an EU member state is its being a member state.

The position of Greece and the Greek Cypriot side is that the 1960 Turkish guarantee should be abolished, but the Turkish side does not want to give them up.

President Anastasiades also touched on specific issues discussed at the negotiating table directly related to the status of Cyprus as an EU member state, which directly affect not only the Republic and the EU itself, but all member states. In his address, he also referred to issues related to decision-making and the need for a reunited Cyprus to continue to be an active and effective member state, as well as the strengthening of the role of the Republic as a pillar of stability and security in the Eastern Mediterranean after a solution.

After the summit, a joint declaration stated: “We reiterate our support to the ongoing process for the reunification of Cyprus, without guarantees, in line with UNSC Resolutions and the EU acquis and under the leadership of the new Secretary-General of the United Nations. We recall that the Republic of Cyprus is, and will remain, a member of our Union after the Settlement, and that EU membership is the best safeguard for a reunified Cyprus.”

The Presidents of Cyprus (Nikos Anatasiades) and France (François Hollande), the Prime Ministers of Greece (Alexis Tsipras), Italy (Paolo Gentiloni), Malta (Joseph Muscat) and Portugal (António Costa) and the President of the Government of Spain (Mariano Rajoy) stated that “in a world confronted with growing uncertainties and instability, we will be stronger by acting together. Weakening Europe is not an option.

“The European Union must uphold our values of freedom, democracy, rule of law and respect and protection of all human rights, address common challenges the Member States are facing and deliver concrete answers to the real concerns of our citizens”, which are “employment, economic growth and social cohesion; protection from the threats of terrorism and uncertainty; a brighter future for the younger generations through education and jobs; and a central role for culture and education in our societies.

“To this end, the Union must act according to the principles of solidarity and subsidiarity, improve the functioning of its institutions and ensure their democratic accountability. It should also aim to increase the involvement of all actors in society, namely the local and regional authorities.

“After the Bratislava meeting, and under the Maltese Presidency of the European Union, the Informal Malta Summit and the Rome celebration of the 60th Anniversary of the Treaties of Rome will provide the opportunity to debate and decide on the direction and clear objectives for the European Union.

“With that in mind”, the Southern EU countries “have agreed to focus our work on the following priorities:

– Ensuring the internal and external security of Europe; and

– Migration and reinforcing cooperation in the Mediterranean and with African Countries.”

The Heads of State and Government also declared that the “European Union needs to deliver and progress, in a balanced and concrete way, on all these fronts. Real changes must be felt in citizen’s lives”.

They defended the urgency of the EU to focus on effectively responding to the new challenges, namely in the security and defence area. In order to achieve this goal, it is essential to conclude an equally important area of progress by completing and reforming the EMU, ensuring a resilient and cohesive Eurozone and thus allowing the euro to fulfil its original role.

“We believe this is the way to build a shared prosperity by all Member States and reinforce the unity and sense of purpose of the European project,” the declaration said.

Although the first meeting had caused the disturbance of fiscal orthodoxy supporters, Portugal, France, Italy, Spain, Greece, Cyprus and Malta underline that they do not want to create cracks in Europe by setting up a brow of the southern countries.

The next Southern EU Countries Summit will be held in Spain in April, after which Cyprus will take the initiative.