It is of strategic importance to facilitate the rapid accession of Serbia to the EU given its key role in guaranteeing peace and stability in the Balkan region, Greek Premier Alexis Tsipras said after meeting his Serbian counterpart Aleksandar Vucic during his Official Visit to Beograd.

“Premier Vucic and I agree that the future of the Balkans can only be built on the basis of International Law, reciprocal respect, dialogue and collaboration and not by breaking the rules or through interventionism, challenges and provocations and non-respect for the law and international agreements.”

“Today Greece and Serbia are on a common path and have common goals; they are both interested in maintaining peace and stability in the turbulent Balkan region,” the Greek Prime Minister added.

Prime Minister Tsipras paid a two-day visit to Serbia on January 31st, during which he held a series of contacts with the state and political leadership of the country. He was accompanied by Foreign Minister Nikos Kotzias and Deputy Minister of Economy and Development Stergios Pitsiorlas.

The visit started at with the official welcoming ceremony at the Prime Minister’s Mansion, followed by a private meeting with his Serbian counterpart Aleksandar Vucic, as well as extended talks between the two delegations. After the end of the bilateral discussions the two Premiers made joint declarations. Later, Prime Minister Tsipras was received by the President of the Republic of Serbia Tomislav Nikolic, followed by a private meeting. A meeting between Premier Tsipras and Minister Kotzias later took place with Serbia’s Deputy Prime Minister and Foreign Minister, Ivica Dacic, and then, in the afternoon, the Prime Ministers of both countries addressed the Greek-Serbian Business Forum which brought together more than 70 Greek companies. On the last day of the visit, the Greek Prime Minister met with the President of the Serbian National Assembly Maja Gojkovic, and then, with His Holiness Irinej, Archbishop of Pec, Metropolitan of Belgrade-Karlovci and Patriarch of Serbia.

After their meeting, the two Premiers announced that they had agreed to form a high council that will meet in Thessaloniki this spring, where the governments will discuss strengthening relations. 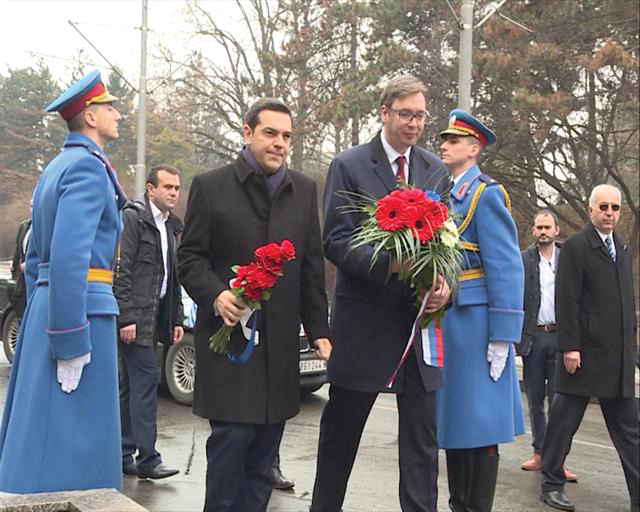 The two nations are connected by tradition, history, culture and spiritual ties said Premier Tsipras, adding that Greece will be “stable” in its position regarding Kosovo. Greece is one of five EU member-states that have not recognised the unilateral declaration of Kosovo’s independence made in 2008 and rejected by Serbia as a violation of its territorial integrity. “The future of the Balkans can only be built on the foundations of International Law, not interventions, violations of the rules. There is no longer room for such things in the Balkans,” the Greek Prime Minister said.

During his joint news conference with his Serbian counterpart, the head of the Greek government said their meeting was constructive, while both stressed the importance of mutual respect. “I stressed that peace and stability are created through solutions mutually acceptable to all sides, Greece will remain stable in its stance linked to the respect of the principle in solving this issue,” said Prime Minister Tsipras. He further expressed his concerns over a rise in nationalistic and expansionist voices.

Speaking about Serbia’s EU bid, he said that Athens will continue to provide “active and stable” support to Serbia on its path toward joining the EU and will insist on improving bilateral diplomatic relations, established 150 years ago. “We recognise there are great difficulties and a great sacrifice that the Serb people must suffer to accomplish that goal and we will help you in that.”

The Greek Prime Minister also said an agreement was reached to “strengthen dialogue on the refugee crisis.”

“Today Greece and Serbia are on a common path and have common goals; they are both interested in maintaining peace and stability in the turbulent Balkan region,” said Premier Tsipras in meeting with President Nikolic and Prime Minister Vucic.

Addressing the news conference, Premier Vucic said that their discussions were “long and serious” and that the friendship between the two nations was emphasised throughout the meeting. “Our conversation was not based on what is past, but what we must do in the future,” he said. The Prime Minister said that Serbia supports Greece’s participation in the Berlin Process and is grateful to Greece for not recognising Kosovo.

The two heads of government also discussed economic relations. Speaking earlier during the meeting between the two delegations, Premier Vucic said that trade volume between Serbia and Greece currently stands at about 380 million euros and could grow 70-80 million a year over the next five years. According to him, the level of bilateral trade was not satisfactory, but that it could rise significantly over the next few years.

The two Premiers also agreed to commence negotiations on the reconstruction of the railway that connects the Serbian capital city of Belgrade to the Greek northern city of Thessaloniki. After their meeting, Premier Vucic said that this was one of the most important topics of their meeting; the 650 km-long joint railway project that would accelerate both passenger and cargo transport from Belgrade to Thessaloniki. “Currently, a cargo train needs 49 hours to arrive there, and this has to be reduced to 30 hours by year 2020. In comparison, passenger trains need around six hours to reach Thessaloniki”, Premier Vucic said.

According to the Serbian Prime Minister, the two sides agreed to establish a joint council comprised of government officials who will meet this spring to discuss details of the railway project, as well as other planned projects. 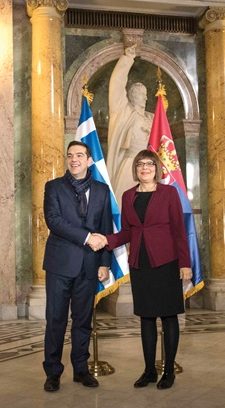 Premier Tsipras also highlighted the importance of the reconstruction of the railway line between Belgrade and Thessaloniki, saying the “modern railway network would enable citizens, as well as goods from the port of Piraeus, to reach Belgrade faster.” According to him, Greece is the third biggest investor in Serbia and the two countries have to improve their relations to the level of strategic cooperation. He also revealed that the officials from the two governments will talk about initiating further cooperation in the areas of energy, infrastructure, communication and technology in Thessaloniki this spring.

The two Premiers were also said to have discussed their relations and cooperation with other countries, including some outside the EU. “We talked about our relations towards partners that are not EU members and agreed it is necessary to maintain good relations with China, as well as Russia and other countries,” Premier Vucic said.

This trip to Serbia was the first of a Greek Prime Minister in seven years, although Premier Tsipras visited the country in December 2014 in his role as party leader of Syriza.

Pictured above: President of the Republic of Serbia, Tomislav Nikolic, welcomes the visiting Greek Prime Minister to Belgrade; the Serbian and Greek Premiers, Alexis Tsipras and Aleksandar Vucic respectively, agree to form a high council that will meet in Thessaloniki this spring, where the governments will discuss strengthening relations; the two Prime Ministers lay wreaths at the Monument to Rigas Feraios; with Maja Gojković, Speaker of the Serbian Parliament.