President of the Italian Republic pays State Visit to Athens

Countries face common challenges in the economy and migration 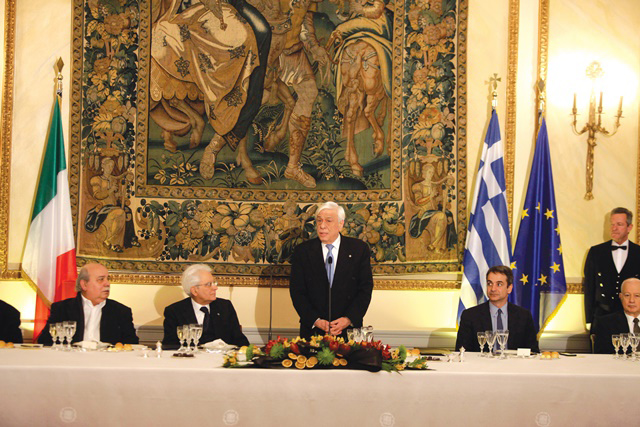 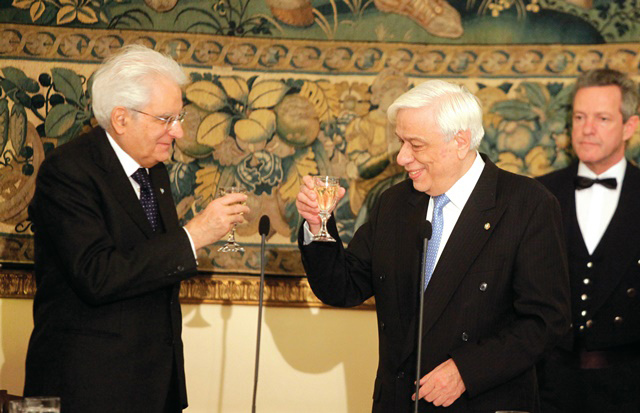 Italian President Sergio Mattarella and the leadership of Greece called for stronger cooperation among European countries to collectively and effectively face the common challenges of the economic and refugee crises.

Greece and Italy share common ideals for the future of Europe and the Greek people are ready to cooperate with Italy on the common challenges to jointly protect the future of the European Union and its cohesion.

President Sergio Mattarella was in Athens on January 17th-18th for a two-day State Visit where he was welcomed by his counterpart, President Pavlopoulos, Prime Minister Alexis Tsipras and President of the Hellenic Parliament Nikos Voutsis, after visiting the refugee camp at Eleonas.

“Greece with all its political forces united will overcome the crisis and will firmly continue its course within the European Union and the hard core of the eurozone,” President Pavlopoulos said welcoming his visiting Italian counterpart to the Presidential Mansion. He further thanked the visiting Head of State for Italy’s sincere and practical support to overcome the Greek crisis, but also for the warm hospitality during his stay in Rome in November 2015. 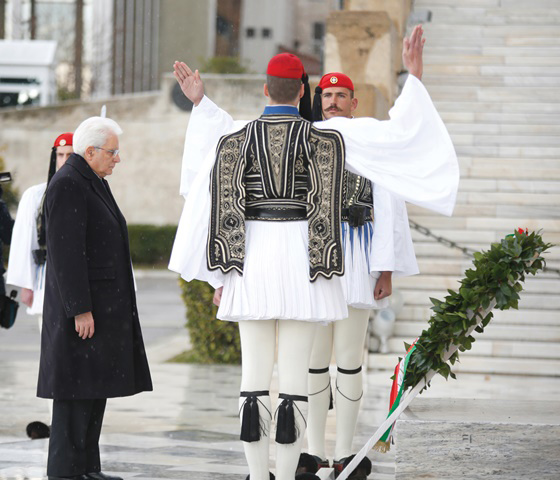 President Pavlopoulos stressed that Greece and Italy share common ideals for the future of our European family and of European integration in general, and added that the Greek people are ready to cooperate with Italy on the issues of migration and economic crisis to jointly protect the future of the European Union and its cohesion.

“A future that is connected with the defence of Man, the Republic and the fundamental principles and values of the European culture,” said the President. “Ancient Greece and Rome marched together to build a civilization, upon which rests the whole Western Civilization. And be sure that we will support this (Culture) together and with all our strength,” he stressed.

On his part, President Mattarella referred to the excellent bilateral relations between Greece and Italy, noting that the close cooperation between the two peoples is based on a millennial history, with shared values and a common culture.

“All these create a strong friendship and a common way of addressing international problems. A common way, which leads us to the development of common strategies,” he stressed.

He made special reference to the need for the EU to focus on economic growth and boosting employment for young people. On migration, he too stressed that it is not only a problem for Greece and Italy, but a problem for all Europe and the EU.

Finally, he expressed the hope, on the occasion of 60 years from the signing of the Treaty of Rome next March, that Europe will be given the opportunity to rekindle the sense of solidarity, which should govern the EU and its peoples. 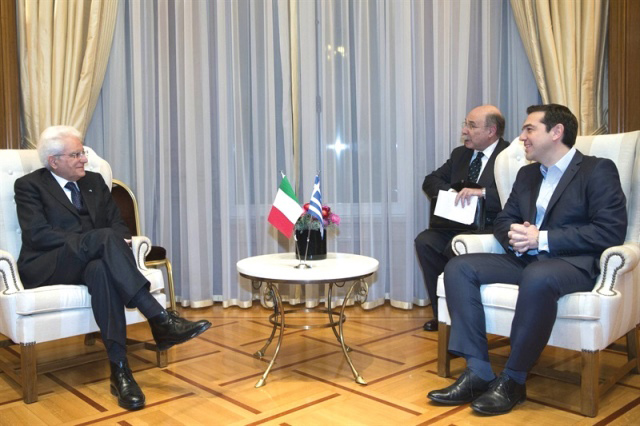 Greece and Italy are united by the common challenges that they face in the economy and migration, Prime Minister Tsipras told President Mattarella as he welcomed him to the Maximos Mansion. “Today we stand as EU countries, as Eurozone countries, as countries of the European South, before common challenges, the economic crisis and the refugee crisis. Therefore, our cooperation, similarly to the cooperation of all the European countries in the Mediterranean, is a critical factor for the creation of a better Europe,” the Premier said.

“We look forward to deepening and our bilateral cooperation in a number of areas – the economy, investment, energy and culture, because, let us not forget, this is our powerful weapon,” he added.

On his side, President Mattarella agreed on the common challenges facing the two countries. “Another common problem that unites us is the huge issue of migration, the huge refugee issue. Greece and Italy, given their geographic position as borders of the EU, welcome many more refugees. Greece and Italy have respected the age-old duty to welcome and provide hospitality, as an indication of civilization, offering help to thousands of women, men and children,” he said.

“However Europe must commit more. It must increase the support it offers to Greece and Italy because the refugee issue is not just a problem for Italy and Greece, but of Europe as a whole,” he added. 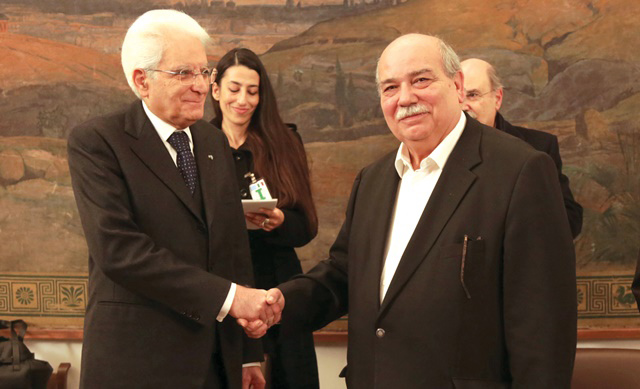 In visiting the Hellenic Parliament, President Mattarella was received by Parliament President Nikos Voutsis. As he welcomed the visiting Italian Head of State, the Greek Speaker reiterated the common struggle of Greece and Italy to defeat austerity policies, social exclusion and racism, xenophobia and neo-nazi phenomena in Europe.

“The two countries are working together so that peace prevails, whilst strengthening the forces of peace throughout the world and in Europe. We are located in the centre of a general destabilised region from North Africa to the Middle East and we are experiencing the dramatic consequences of war conflicts,” President Voutsis said. 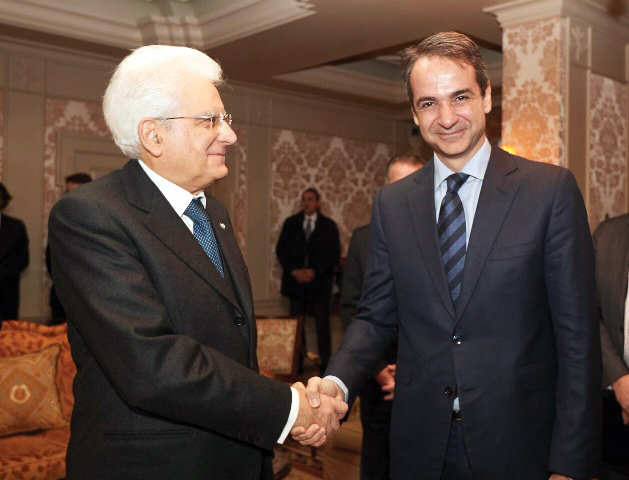 “Greece and Italy share a common understanding of international politics, which should be based on peace, cooperation and security. Greece and Italy also have a common vision of the European Union. Europe based on the values of peace and development and expanded dialogue with countries which are not yet members. On growth and employment and the future of the youth, is where the EU should be focused upon,” President Matarrella pointed out.

The meeting was attended by the First Vice President of the Hellenic Parliament Anastasios Kourakis and the President of the Parliamentary Friendship Group Greece-Italy Ioannis Giolias on the Greek side. Whereas, the Italian President was accompanied by the Deputy Minister of Foreign Affairs and International Cooperation Vincenzo Amendola and the Ambassador of Italy to Greece, Efisio Luigi Marras. 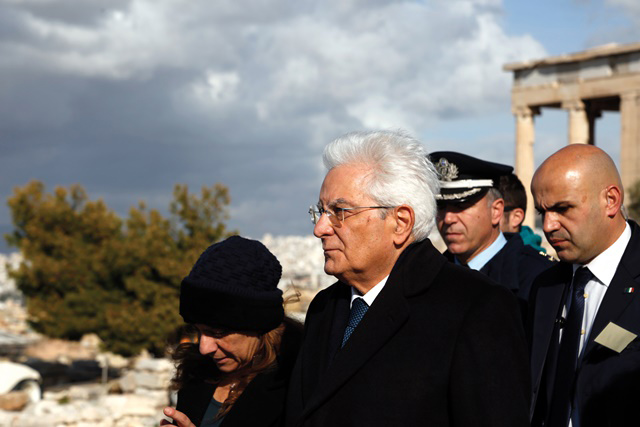 The two Presidents were warmly greeted by Culture Minister Lydia Koniordou as they visited the Acropolis Museum. Here President Pavlopoulos made a special reference to Roman emperor Hadrian:

“Hadrian was one of the greatest Emperors of Rome and, perhaps, the top one in terms of intellectual and cultural range. He was the first to disseminate, in a meaningful way, the Greek antiquity, the spirit and culture of Rome, to be delivered later in eternity. Subsequently, Hadrian rightly won the title of ‘Benefactor of Athens’”. 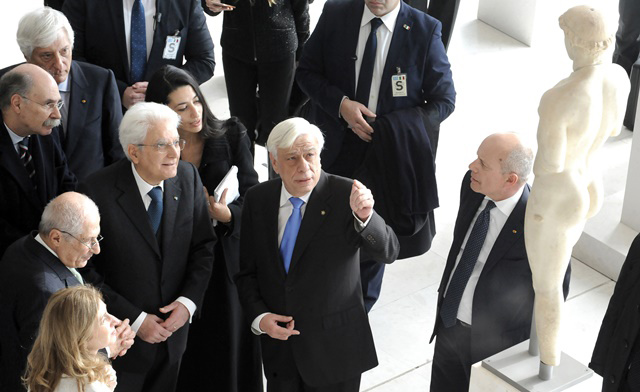 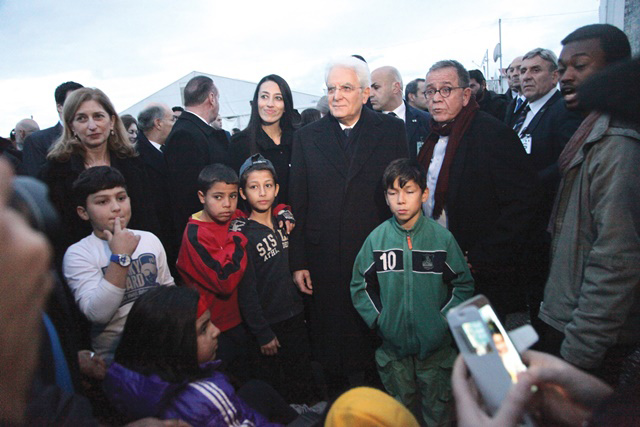 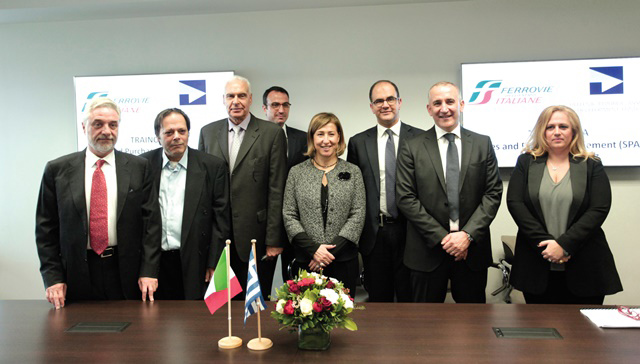 Greece recently concluded the sale of its rail company ‘Trainose’ to Italy’s State railways ‘Ferrovie dello Stato’ for 45 million euros, which is prepared to invest 500 mil euro in rolling stock and new technology to improve the service, starting with the important route between Athens-Thessaloniki (see photo).