Several key factors in favour of creating an alliance 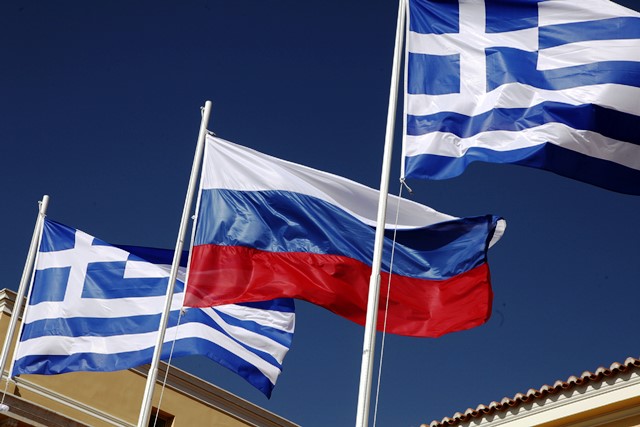 Russian Foreign Minister Sergey Lavrov visited Athens on November 1st-2nd for talks pertaining to trade, economy, investment and energy cooperation, as well as international affairs and EU-Russian relations amongst other items on the agenda. During his visit to Athens, Minister Lavrov met with the President of the Hellenic Republic Prokopis Pavlopoulos, Greek Prime Minister Alexis Tsipras and later signed the Greek-Russian Foreign Ministry Consultations Programme for 2017-2019 after discussions with Foreign Minister Nikos Kotzias.

As part of their agenda, both Minister Kotzias and Minister Lavrov took part in the 4th Greek-Russian Social Forum at the Zappeion Conference and Exhibition Centre and attended the opening of the exhibition: ‘Hermitage-Gateway to History’ at the Christian and Byzantine Museum. 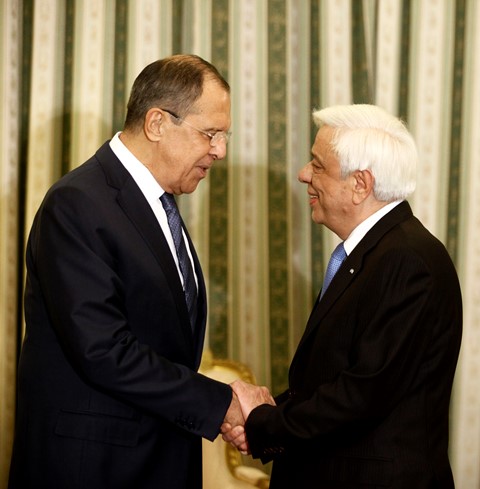 Speaking in front of the press after his audience with President  Pavlopoulos, the Russian diplomat alleged that the efforts to reach a political solution in the Syrian crisis were being sabotaged. The two men talked extensively about the Syrian conflict and the Cypriot problem in front of the reporters. “On numerous occasions there have been attempts of sabotage at the UN Security Council to undermine a resolution that could lead to a political solution of the Syrian crisis”, Minister Lavrov claimed. “If these resolutions had been honestly adopted, progress could have been achieved on the matter,” he underlined.

Commenting on the Cypriot problem, the head of Russian diplomacy said that some in the UN were placing obstacles in the efforts to reach an agreement. “We will not accept external pressures on agreeing to a deadline being imposed”, he clarified, referring to the Cyprus problem, adding that the Greek and Turkish Cypriots would have to agree and the UN Security Council had already laid down the framework of the deal concerning the self-determination, the property and land disputes. “We will contribute so that UN efforts to resolve the problem are made within the framework of the decisions of the UN Security Council”, he pointed out.

On his part, President Pavlopoulos said that Greece supported all initiatives towards cooperation between the US, the EU and Russia in addressing the Syrian crisis, while he expressed his gratitude for the support Russia demonstrated at the UN on the Cyprus problem. 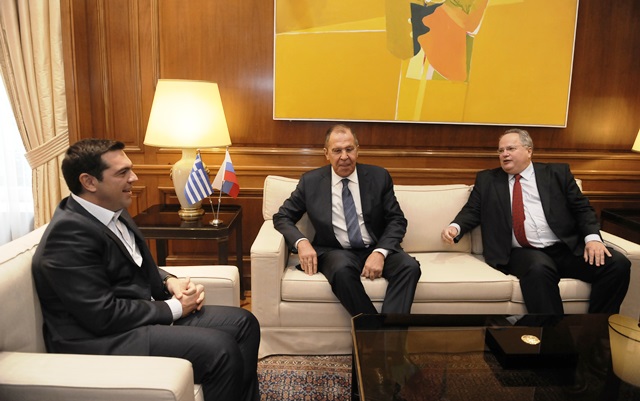 Prime Minister Tsipras in his meeting with the visiting Russian Foreign Minister underlined that his visit marks the common belief in the need to maintain close cooperation and dialogue relations, “If we want to move in the direction of peace and stability in the region,” he said.

A wide range of issues were covered during the Prime Ministers’ meeting with Minister Lavrov, according to a prime minister’s office announcement. Premier Tsipras and Minister Lavrov were said to have discussed the relations between the European Union and Russia, as well as regional developments, particularly regarding the eastern Mediterranean, Syria and Ukraine. Moreover they exchanged views on the importance of a fair, viable and comprehensive solution for Cyprus based on the UN Security Council Resolutions.

Minister Lavrov referred to the current international situation, which he described as difficult, welcoming the actions of social diplomacy and stressing the need for the existence of the Greek-Russian Social Forum. He also underlined that it is a good step for the existence of international contacts and dialogue adding that it has significantly contributed to the development of bilateral relations. He stressed the intellectual contact between the two peoples which exists, despite the political choices and circumstances. 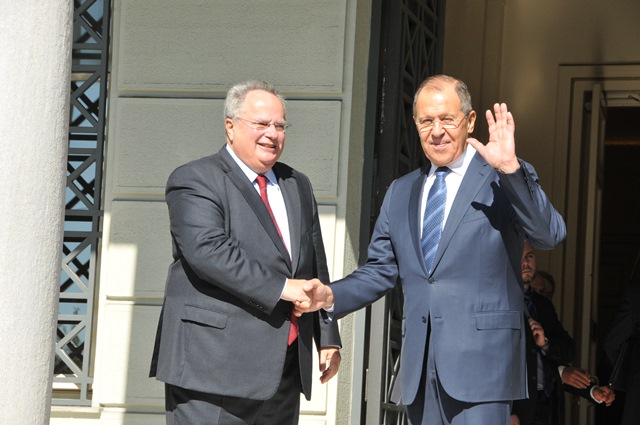 Russian Foreign Minister Sergey Lavrov and Greek Foreign Minister Nikos Kotzias expressed their mutual intention to promote deeper bilateral relations and political dialogue based on mutual trust between Greece and Russia, during a joint press conference in Athens. The two Ministers had earlier signed a Consultations Programme between their respective Ministries for the years 2017-2019, which they said acted as long-term confirmation of their intentions.

They both said that their discussion had covered all pending issues, while they agreed on the immediate necessity to restore calm by ending the violence in Syria, and more generally on the need for stability and security in the Middle East and North Africa. Minister Kotzias noted that Greece promotes stability in the region through initiatives in the Mediterranean, Middle East and the Balkans.

The two Ministers also noted their agreement on the Cyprus issue. UN Resolutions must be implemented, Minister Lavrov repeated, as the only settlement framework leading to a solution that is stable and acceptable to both Greek Cypriots and Turkish Cypriots. The Greek Foreign Minister publicly thanked his counterpart for Russia’s steadfast support of the Cyprus Republic.

Minister Kotzias also stressed the need to keep channels open between NATO and Russia, adding that Europe’s security architecture must include Russia, not set it apart. Minister Lavrov praised Greece’s stance with respect to Russia’s relations with the EU and NATO, noting that Athens was always in favour of dialogue and seeking solutions, rather than confrontation.

Asked to comment on recent statements made by Turkish President Recep Tayyip Erdogan regarding the “borders of Turkey’s heart” that seemed to dispute the Lausanne Treaty, the Greek Foreign Minister replied that the borders of the “heart” and International Law were not the same thing.

“The history of Greece’s heart reaches as far as India. But the borders of our heart are not the borders of International Law. Respect for borders is obligatory,” Minister Kotzias commented. He added that history “must be a school, not a prison” and treated with respect, “not with a mythology created after the fact.”

On his part, the Russian Foreign Minister said that the answer to the issue was extremely simple: “In all matters, there must be respect for International Law arising from international treaties.”

Minister Lavrov said the talks with his Greek counterpart had also examined the potential for boosting cooperation in the energy sector and that a Greek-Russian Ministerial meeting will examine possible ways to overcome “negative trends in economic relations”. 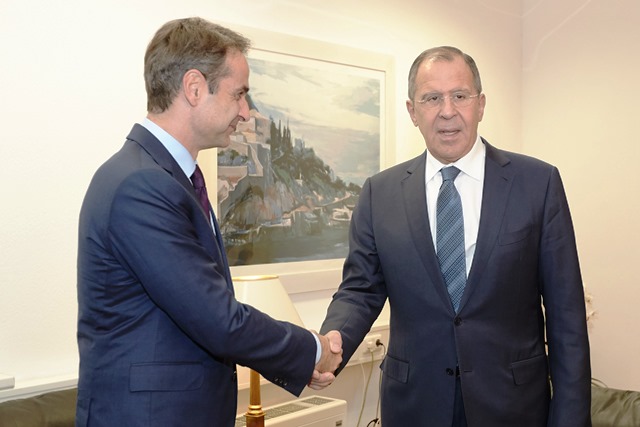 “During our meeting with the Prime Minister, we confirmed the dynamics of mutual friendship and respect between the two countries,” said the visiting Russian Minister in the presence of Foreign Minister Kotzias and Environment and Energy Minister Panos Skourletis, while addressing the Greek-Russian Energy Conference, held within the framework of the 4th Greek-Russian Social Forum at the Zappeion Conference and Exhibition Centre.

The first part of the congress focused on geostrategic and energy issues. In its second part, the congress examined the energy cooperation between Greece and Russia based on the long and mutually beneficial relationship between the two countries. The Greek-Russian cooperation and perspectives in the areas of electricity, natural gas and geostrategic correlations in the wider region were thoroughly examined.

The congress aimed to present an overview of Greek-Russian relations with focus on the energy sector, as well as the future perspective of relations between the two countries.

The South European Pipeline project that will transfer Russian natural gas through Turkey, across Greece, and come ashore in Italy is “viable”, the CEO of state natural gas company DEPA, Theodoros Kitsakos, said. Speaking at the Greek-Russian Forum, Mr. Kitsakos said that he believed the project can start very soon, within 2017, provided that it respects the principles of the European Union. He also said that it’s possible to include other companies in the project for which DEPA has signed a MoU with Gazprom and Italy’s Edison. He also invited private investors to participate in the project to supply large islands with natural gas.

Power utility PPC Chairman and CEO Manolis Panagiotakis invited Russian firms to cooperate with the company in joint projects in the Balkans during his speech at the Greek-Russian Forum. “We have the opportunity to play a leading role in the integration of the Balkan market as a key participant. There is plenty of hydrodynamic and lignite and also the potential to generate electricity from natural gas, as well as very large prospects within the context of policies to address climate change, with renewable resources and distribution networks,” he said.

Co-chaired by the then-Deputy Foreign Minister, Dimitris Mardas, and the Minister of Transport of the Russian Federation, Maxim Sokolov, the 10th Meeting of the Joint Committee on Economic, Industrial, Technological and Scientific Cooperation (JIC) between the Greek Republic and the Russian Federation (3rd-4th November) concluded in Athens.

Over the two-day period, the Commission examined the current situation and the prospects for Greek-Russian economic cooperation, coupled with the upgrading of bilateral institutional framework. Within this context, particular emphasis was given to the fields of energy, transport, agricultural production, scientific and technological cooperation, tourism, regional cooperation, industry and micro-sized enterprises.

The next, 11th in a row, Commission Meeting will take place in 2017 in the Russian Federation.