The Adriatic-Ionian Initiative – Connecting the Region 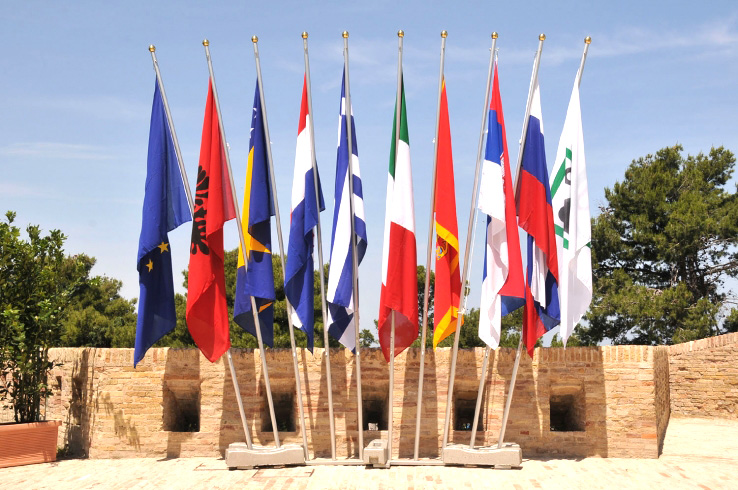 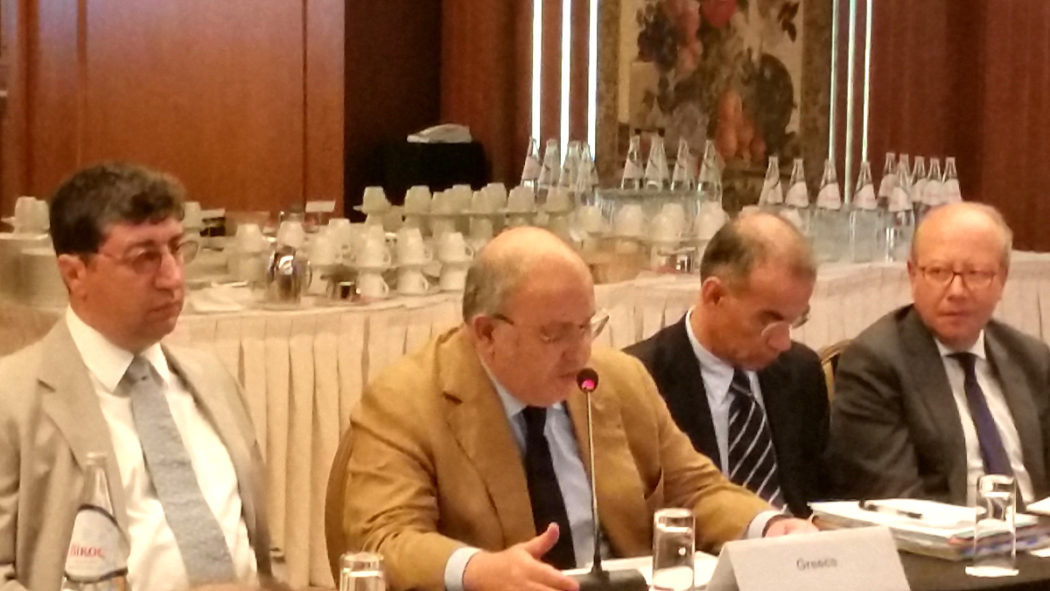 Alternate Foreign Minister Nikos Xydakis presided over the 4th Governing Board Meeting of the EU Strategy for the Adriatic-Ionian Region (EUSAIR), which took place in Athens on October 7th. In his remarks to the senior officials meeting, he stressed that the “excellent challenge for the Greek Presidency is to tackle the refugee-immigration issue facing the Adriatic-Ionian Initiative (AII) countries, always in combination with the developmental nature of the Strategy.”

Greece assumed the Presidency of the AII as of June 1st 2016. It is a founding member on this initiative in which the countries of Albania, Bosnia and Herzegovina, Croatia, Italy, Montenegro, Serbia and Slovenia also participate.

The Greek Alternate Minister marked the importance of the Initiative and Strategy, especially during this period of economic recession, which is implemented through cooperation by chambers of commerce, cities, universities and other regional bodies. The aim of Greece is to actively contribute to the economic and social prosperity of the region seeking economic growth and a reduction in unemployment.

Mr. Xydakis informed his colleagues that the Forum concluding the Hellenic EUSAIR co-Chairmanship and AII Chairmanship will be held in May 2017 on the Ionian Coast at ministerial level, in which other stakeholders coming from the participating countries of the Initiative will also take part.

After presenting its priorities, the Hellenic Co-Chairmanship opened a discussion on the EUSAIR Facility Point, which is close to finalising its preparatory activities before it becomes fully operational.

– The outcome of the technical meeting of Pillar Coordinators held on the previous day;

– The dialogue between key implementers and ESIF/IPA Programme Authorities;

– Follow up of the Dubrovnik Declaration concerning possible actions on the refugee and migration crisis;

– State of play and next steps of the ADRION Programme. 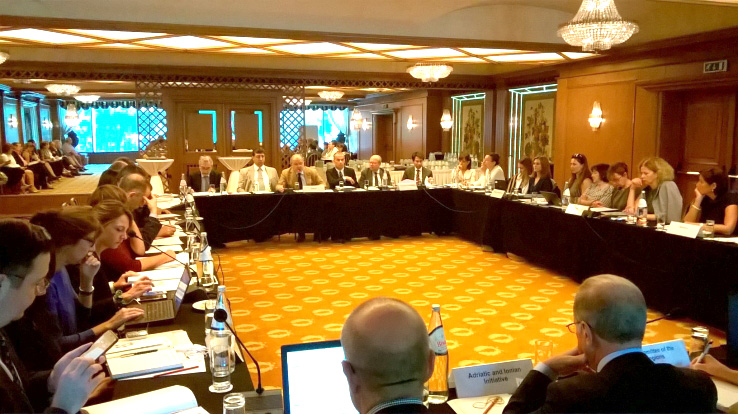 The AII CSO meeting took place back to back with the EUSAIR meetings on October 6th. Its main focus was the new role of the AII as advocate of civil society organisations for their full involvement into the EUSAIR Governance through the overhauled AII Round Tables and the EUSAIR Stakeholders Platform as soon as it becomes functional.

Under mandate by the senior officials, the Secretary General reported their encouragement and interest to have the Stakeholders Platform set up and working as soon as possible so that the principle of subsidiarity is finally fully applied for the EUSAIR. 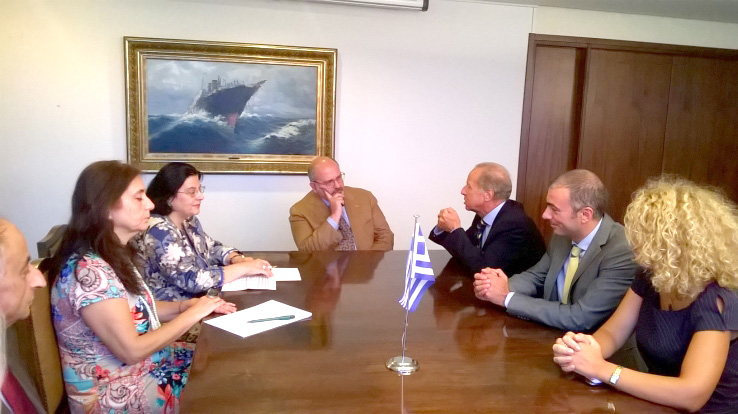 They presented a Position Paper as their tool allowing for an integrated approach of the Fora for the implementation of EUSAIR Action Plan.

The AII Permanent Secretariat attended the meeting and confirmed his role as ‘facilitator and link’ between the civil society organisations and the EUSAIR governance structure.

The work of the Fora will be an added value for the EUSAIR Stakeholder Platform that shall be fully operational by the beginning of 2017.

The Adriatic – Ionian Initiative
In an attempt to cope with the spreading of the Balkan crisis, and also to correct some wrong actions, back in 1999 the European Union promoted the so-called ‘Stability Pact for South Eastern Europe’ regarding all the south-eastern European countries aspiring to join the Union in the future. Within this treaty, on the occasion of the Finnish EU Summit of October 1999, held in Tampere, the ‘Adriatic-Ionian Initiative’ (AII) was put forward by the Italian Government, before being adopted. The EU has strongly encouraged this initiative, made possible by the decisive and active support of another EU member state, Greece.

AII was established at the Summit on Development and Security on the Adriatic and Ionian Seas, held in Ancona, Italy on 19th-20th May 2000 and attended by the Heads of States and Governments of Italy, Albania, Bosnia and Herzegovina, Croatia, Greece and Slovenia. At the end of the Conference, the Foreign Ministers of the participating Countries signed the ‘Ancona Declaration’ which calls for the strengthening of regional cooperation, the promotion of political and economic stability, thus creating a solid base for the process of European integration. The Initiative was later extended to Serbia and Montenegro, and after the referendum in Montenegro, both States preserved the status of AII Participating Countries. Today, AII is comprised of eight Members: Albania, Bosnia and Herzegovina, Croatia, Greece, Italy, Montenegro, Serbia and Slovenia. 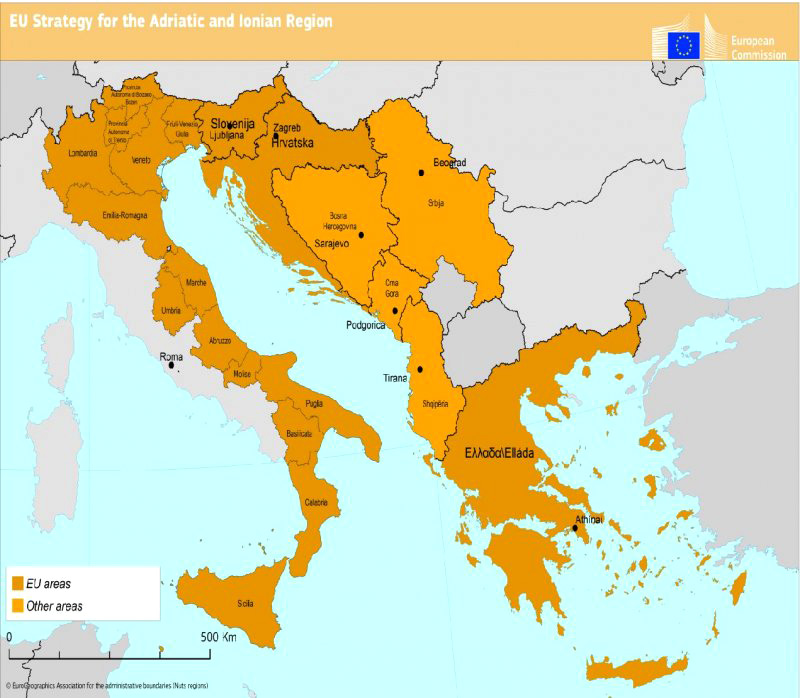 Regarding the latest developments, and following the EU approach to support multilateral sub-regional cooperation and the successful example of the adoption of the EU Strategy for the Baltic Sea, AII has started working, since the beginning of 2010, on the idea of a Macro-Region for the Adriatic Ionian Region. Considering the common historical and cultural heritage, the use of the common sea, the need to protect the marine environment from pollution, the opportunity of sustainable development and growth and the common goal to make this basin an internal sea of the European Union when the integration process is concluded in the Western Balkan countries, the Ministries of Foreign Affairs of the eight AII countries approved, under the Italian Chairmanship, a ‘Declaration on the Support of the EU Strategy for the Adriatic Ionian Basin’ (5th May 2010, Ancona). Since then the AII participating states, the coastal regional authorities, the thematic networks and the AII started work aimed at raising awareness on the necessity of establishing a Macro-Region for the Adriatic Ionian basin. This initiative raised support from all Adriatic Ionian actors at all levels of government and society.

As a consequence of AII full commitment, the European Council gave mandate to the EU Commission to present a new (EUSAIR) by the end of 2014. EUSAIR was endorsed by the Council on October 24th 2014.

AII was originally founded with the aim of providing common and concerted solutions to shared problems, from fighting against organised criminality, to the need to protect the natural environment of the Adriatic-Ionian Sea. Many years after its’s establishment, the geopolitical environment around has deeply changed. Given the increased interdependence among States connected to the globalisation processes and the need to provide common solutions to common problems affecting the Adriatic region, concerted cooperation, not only among regional countries, but also among regional initiatives has become more imperative. Cooperation has therefore gradually assumed different forms, including the establishment of partnerships involving Adriatic Ionian networks and fora such as the Forum of the Adriatic Ionian Chambers of Commerce, the Adriatic Ionian Forum of Cities and Towns and UniAdrion (the Adriatic Ionian network of Universities).

Lez: The Alternate Minister of Foreign Affairs Nikos Xydakis at the 4th Governing Board Meeting of the EU Strategy for the Adriatic-Ionian Region (EUSAIR), meeting in Athens; in discussion with AII Secretary General Ambassador Fabio Pigliapoco.