Visit of the Prime Minister of the French Republic

Upon the invitation of his Greek counterpart Alexis Tsipras, French Prime Minister Manuel Valls paid a visit to Athens on June 2nd and 3rd expressing his country’s interest in investing in Greece, whilst promising more support with reforms that are needed to overcome the financial crisis, as well as help in dealing with the refugee crisis. He was accompanied by Finance Minister Michel Sapin and State Minister for European Affairs Harlem Desir.

Upon his arrival, the French Prime Minister met with the President of the Hellenic Republic, Prokopis Pavlopoulos, and pledged France’s support towards Greece. Premier Valls underlined the importance of Greece in relation to the refugee crisis and stressed that the EU’s top priority is to secure the borders and end the conflict in Syria.

Later on in the day, the French Prime Minister met with the President of the New Democracy political party, Kyriakos Mitsotakis.

The visiting French Prime Minister was received by Greek Prime Minister Alexis Tsipras at his office at the Maximos Mansion where, after their extended talks and the signing of a road map for the strategic relation between Greece and France, they made public statements to the press. 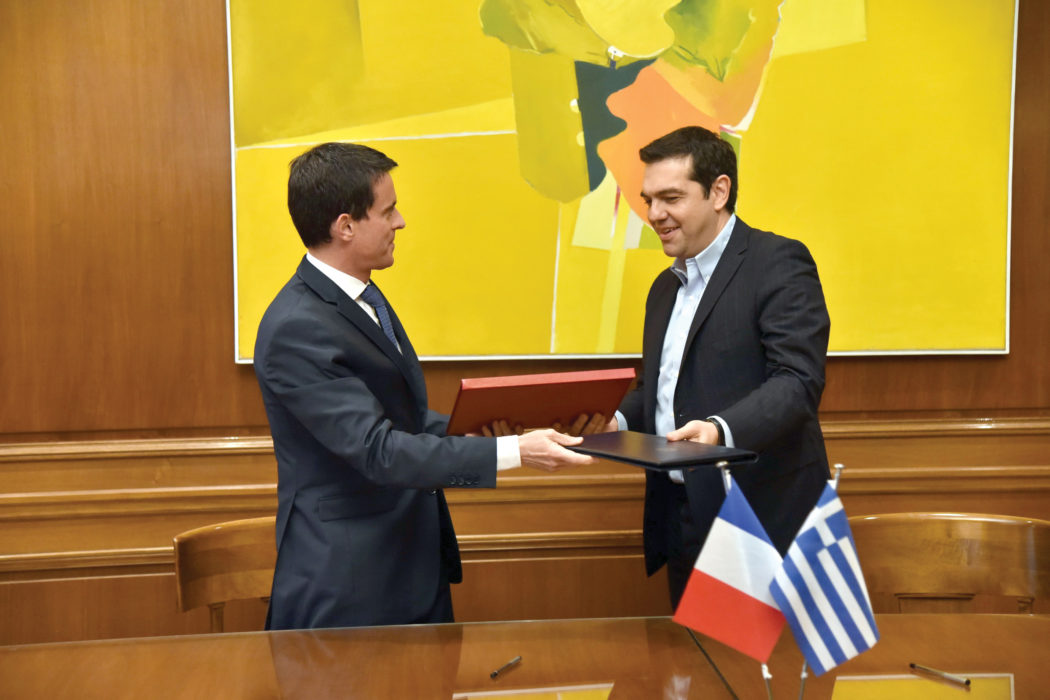 The two Premiers sign a road map for the strategic relation between Greece and France. D Paterakis

“Your visit to Greece, following the visit of President Hollande at the end of last year, confirms the very close working relationship and mutual understanding between our countries” announced Premier Tsipras as he welcomed his French counterpart to the Maximos Mansion.

The Greek Premier further noted that “Greece and France share common values, and many times in our common European course, we have defended the democratic acquis of our people and the vision for a Europe of social cohesion.” He added that the two countries will “continue this common history, this common course”. The French Prime Minister responded that “if we supported Greece to stay in the Eurozone and if we supported the courageous reforms, it was because Greece is in the heart of Europe,” stressing that “Greece is necessary both for France and Europe”.

In a joint press conference with Prime Minister Alexis Tsipras in Athens, Premier Valls declared that “the French Government stands by the side of the Greek Government.” He also noted that many had questioned whether Greece had a future in the eurozone last year, but that France had thrown its full support behind Greece and averted the risk of a Greek exit from the euro. Premier Tsipras struck a similar tone, noting that France’s stance had averted “extreme behaviour which, focused on Greece, was putting the eurozone at risk.”

The completion of a deal between Greece and its international creditors at a Eurogroup Summit last month marked a “new page for Greece,” Premier Valls said. He added that France was committed to continuing to provide technical support to Greece, particularly for the improvement of tax collection and public administration, with a new contingent of French experts to be sent to Athens in September.

The Prime Minister Valls underlined French interest in Greek privatizations and in participating in the Greek tourism and agriculture sectors, as well as supporting local start-ups. As far as state sell-offs are concerned, there is said to be French interest in the new Kastelli airport near the Cretan port of Irakleio, the Thessaloniki water company (EYATH) and the operating arm of the Hellenic Railways Organisation, Trainose.

Greek Finance Minister Euclid Tsakalotos also discussed privatisation with his French counterpart Michel Sapin, as well as outstanding reforms that Greece must legislate before creditors can approve the disbursement of 7.5 billion euros in rescue loans. Minister Sapin also referred to the “difficulties” Greece still faces with its reform efforts.

Greece is aiming to legislate the last few prior actions so that foreign auditors can issue their compliance report and eurozone finance ministers can sign off on further rescue loans that Athens needs to pay down debt maturing. At the end of May, eurozone finance ministers and the International Monetary Fund struck a deal that temporarily put aside their differences over how to manage Greece’s debt burden.

The Hellenic Parliament recently approved a number of fiscal adjustments required for the disbursement of the next bailout tranche of some €7.5 billion ($8.39 billion). The country needs its bailout funding by mid-July at the latest, when it must repay hefty debts, including bonds held by the ECB.

The two Prime Ministers were also said to have discussed Europe’s migration crisis, another big issue that Greek authorities are grappling with, with the French Premier saying that his country is ready to help Greece in its efforts to tackle this pressing issue. He noted that France has already contributed about a third of some 1,350 border guards and that other staff are working to curb migration into Greece. He added that France is prepared to dispatch even more. He also promised that France is willing to take in more migrants stranded on Greek soil since their route into Northern Europe was closed.

France said it would take 400 refugees every month from those who are stuck on the Greek mainland as part of the EU’s relocation programme that was launched in 2015 and has seen less than 2,000 resettled up to now.

The week of his visit, 97 had arrived in France and another 253 were expected to arrive from Greece in the following week. That is a lot more than in January when France took in 19 Eritreans and just 272 people were relocated in various European Union countries. France has also offered to provide 300 people to work with the Frontex border agency and the European asylum authority and 200 have already started working in Greece. 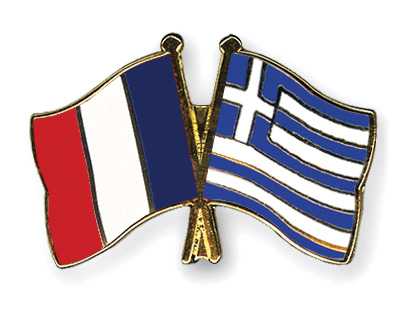 Also on the agenda for discussion was the agreement between the EU and Turkey, which has been in place since March and foresees the return of migrants from Greece to Turkey. Security concerns arising from the exploitation of the migrant flows by radicalised supporters of the so-called Islamic State was also covered.