We Europeans should stand together 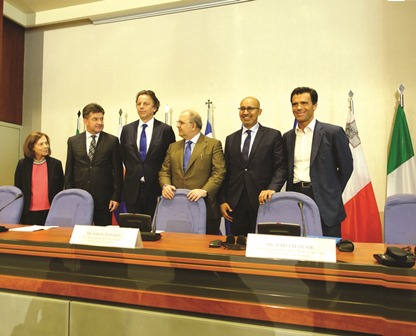 On 8th-9th April, the Alternate Foreign Minister for European Affairs, Nikos Xydakis, received in Athens six Ministers and Deputy Ministers from European Union member states. In an expression of European solidarity, the Ministers were apprised with the management of the migration/refugee crisis following last month’s decisions from the European Council. 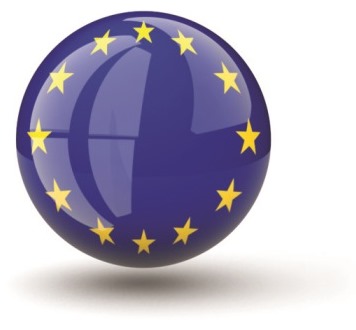 Whilst in Athens, the Ministers and Deputy Ministers were received individually by President of the Hellenic Republic Prokopis Pavlopoulos and by Prime Minister Alexis Tsipras.

The main talks were held at the Foreign Ministry, with the participation of a Greek Government delegation made up of the Alternate Foreign Minister for European Affairs Nikos Xydakis, Minister of Shipping and Island Policy Thodoris Dritsas, Alternate Minister for Migration Policy Ioannis Mouzalas and the Secretary General of the Defence Ministry Ioannis Tafylis.
The Greek side presented its positions on the course of the implementation of the decisions of the European Council, the practices and operational difficulties being met and the solutions proposed for dealing with them, as well as the needs of the assistance agreed upon by the EU and the member states. 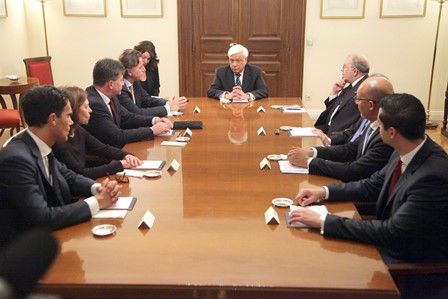 In his remarks Alternate Minister Xydakis said: “As we
hoped, this meeting went better than expected. It’s about solidarity, with deeds, in practice. We showed what it means to exert policy in the field where things happen, where the problem is, and where and when we are seeking solutions.”

The Alternate Minister went on to say that even though this visit was ‘informal’, “it is one of the most substantive ones, on a European level, in the Eastern Mediterranean since the beginning of the outbreak of the refugee crisis. It is a political visit, opening formal procedures. We have the political coverage by elected politicians, and at the same time we bring together increased know-how and expertise and a very focused political will.

“We keep learning how to work together; we keep learning political lessons, in vivo, not in vitro; it’s about practice, and not in theory. Think-tanks are good, but here we are talking about practice. People meet other people; they have to ask tough questions, and sometimes they deliver tough answers.” 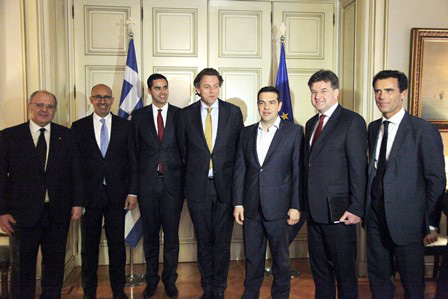 Mr. Xydakis then went on to draw two conclusions, two main conclusions, from this short but very important meeting: “First, this is about a very ambitious, radical, difficult plan. It’s the Joint Action Plan between the European Union and Turkey. History, necessity and practical needs mean that we all have to take ourselves closer towards more political unity, the forms of cooperation and unity that we have kept discussing in Brussels in the various meeting rooms, but we are not moving forward on.

“It’s about practice and effectiveness. This is the first lesson we learnt. The other political lesson we have learnt from this very ambitious project is that once again we are faced with a political problem, a new political problem, and we have to think outside the box in order to find a method of constructive coexistence and partnership among member states in the supranational EU,” he said.

The Greek Alternate Minister further remarked on how important it was to coexist with civil society, NGOs, which also poses further challenges.

On his part, Minister Koenders said that Greece was playing a key role in resolving the migration crisis, “given that a substantial proportion of the refugees and economic migrants arrive here first.” He expressed his deep appreciation, not only for the Greek authorities, but also for the Greek people, the Greek Police and asylum organisations that are dealing with large numbers of people coming ashore on a daily basis who are met with great hospitality as Greece deals with this daunting challenge.

“Fortunately, they are not facing this crisis on their own. The European Union stands ready to lend a hand whenever necessary. This is not a problem that the Greeks should deal with on their own. It’s a common European issue. We need not only to show solidarity in words, but also in practice, and that is what we are here to discuss today,” he said.

Within the framework of their visit to Athens, the European Ministers also visited the Elaionas open-structured Refugee Hospitality Centre where they were received by the Secretary General for Population and Social Cohesion, Vasilios Papadopoulos.

Main photo: Alternate Foreign Minister for European Affairs, Nikos Xydakis pictured with the Ministers – Margarida Marques (Portugal), Miroslav Lajčák (Slovakia), Bert Koenders (the Netherlands), Harlem Désir (France) and Sandro Gozi (Italy); President of the Hellenic Republic Prokopis Pavlopoulos; and Prime Minister Alexis Tsipras receive the visiting Ministers in a bid to prove that Europeans must stand united together as Greece deals with a daily influx of migrants and refugees brought about by a huge geopolitical destabilisation in the Eastern Mediterranean the Middle East.

Previous The Islamic Republic of Pakistan marks 76th National Day
Next A flame is lit, a hope for peace is born