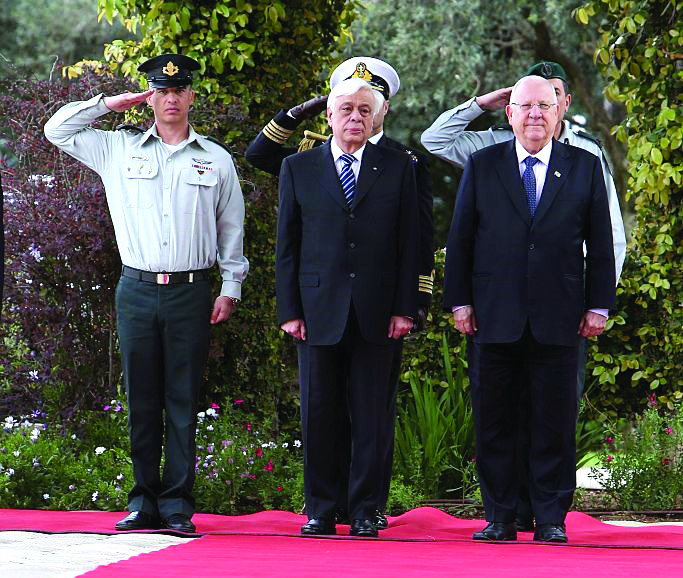 The President of the Hellenic Republic, Prokopis Pavlopoulos, travelled to Israel at the invitation of his Israeli counterpart, Reuven Rivlin. During his three-day visit, 29th-31st of March, the President also met with the Speaker of the Knesset Yuli-Yoel Edelstein, Prime Minister Benjamin Netanyahu, Patriarch Theophilos III of Jerusalem, members of the Greek community of Jerusalem and with Greek Association of Holocaust Survivors. He was also presented with an Honorary Doctorate in Law from the Hebrew University of Jerusalem. 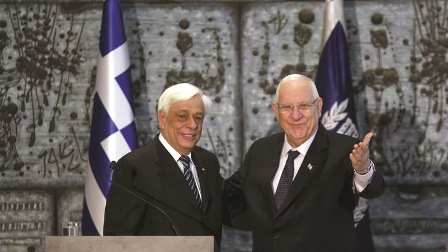 The President’s State Visit to Israel marks 25 years of strong relations between Israel and Greece, as well as shared goals for economic stability and regional security. It is the third Presidential Visit by Greece since relations were established.
Israeli President Reuven Rivlin welcomed his visiting Greek counterpart at the Presidential Mansion in Jerusalem. Before the meeting, during which time they discussed strengthening bilateral ties, the two leaders toured the Yad Vashem Holocaust memorial together. Addressing the press, President Rivlin referred to President Pavlopoulos as a “true friend of Israel.” “Close and neighbouring countries in the eastern Mediterranean must recognise the common danger posed by militant Islam and Islamic State, unite against this enemy and to form one alliance – a regional security and economic alliance to bring an end to global terror,” he added. 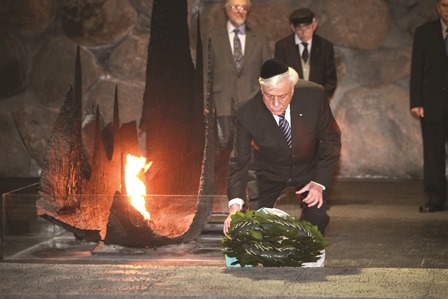 On his part, President Pavlopoulos said that “Europe needs to address the refugee issue in terms of humanity… Europe must never again become a ‘dark continent’ and it must fight against any kind of xenophobia and racism, including anti-Semitism.”

The Greek Head of State further underlined that the Middle East is experiencing hard times because of crises, war, violent extremism and terrorism. “Europe and the entire civilized world are determined to crack down on terrorism, treating the jihadist terrorists as servants of a new kind of barbarism. But the refugee issue needs to be treated in terms of humanity,” he stated. 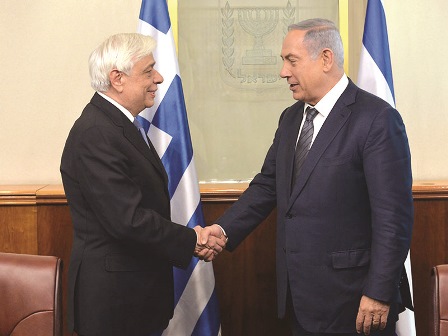 In welcoming the Greek President, Prime Minister Netanyahu said that he was pleased at the strong ties between the two countries. “We have common values. We are two democracies and I am pleased at the continuity in our good relations. I very much believe in the cooperation between our countries, which we will expand in a range of areas: energy, tourism, knowledge, innovation and others.” The Premier went on to state that “the Arab states understand that Israel is not an enemy, but an ally against ISIS. There is great importance to the strategic role that Israel is fulfilling in the region. Israel contributes to stability in the Middle East. A strong Israel prevents the passage of masses of refugees to Europe.” “The world would be different if we were not here,” he added.

In his remarks, President Pavlopoulos thanked Israel for its “assistance and cooperation between our countries. Israel is a western democracy. We feel close to Israel and see you as allies.” 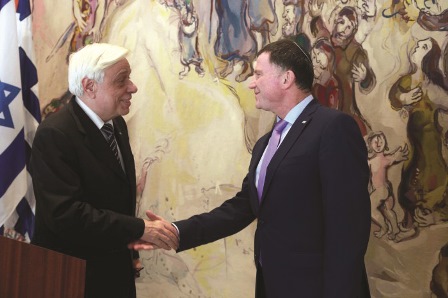 On the terror front, the Greek President elaborated that “terrorists represent barbarism. Only together will everyone be able to resolve the refugee problem and not just each country on its own. We are pleased and grateful at the bilateral G2G cooperation and I would like to positively note the cooperation with Cyprus. The two nations will be able to continue working for Europe and the region. As Prime Minister you have an important role in these relations.”

During his visit in Israel, the President of the Hellenic Republic was awarded an honorary doctorate by the Hebrew University of Jerusalem. The award recognised the President’s distinction as a democratic leader and beacon of Greek national unity; his service to higher education and dedication to the study of law; and his enduring solidarity and friendship with the State of Israel, in particular his steadfast support for the Greek Jewish community and his recognition of the shared historical, cultural and educational values between the Greek and Jewish People. 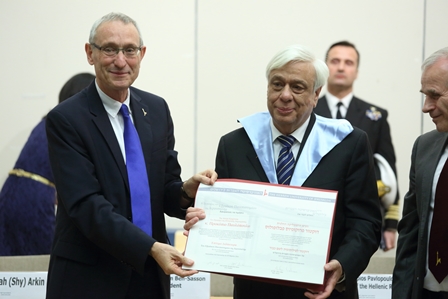 Following the ceremony, President Pavlopoulos delivered a speech on ‘The European Legal Order in the Labyrinth of the Economic Crisis’. The event took place at the Hebrew University’s Mt. Scopus Campus.

Deputy Foreign Minister Dimitris Mardas was accompanying President Pavlopoulos on his State Visit to Israel. In parallel, Deputy Minister Mardas also met with Avigdor Yitzhaki, Advisor to the Prime Minister of Israel on issues of housing development. The subject of the meeting was the participation of Greek construction firms in infrastructure and public projects in Israel.

Finally, on the margins of the President of the Republic’s State Visit, a business mission took place with the participation of Greek entrepreneurs from the sectors of technology, industry, tourism and food.

Ahead of his State Visit to Israel in an interview with Israel Hayom newspaper, President Prokopis Pavlopoulos urged Israeli firms to invest in Greece. “Relations between the two states, Israel and Greece, have reached unprecedented levels. We are marching together toward a more promising and challenging future that is based on a strategic partnership between the two states,” he said.

“The economic relations between the two countries are terrific,” the President continued, adding that “bilateral trade grew by 32% over the past year. There are currently 30 joint projects that involve Greek and Israeli companies and we will soon invite additional companies to take part in more projects.”

The President said that Greece has encouraged Israeli companies to “seize the many opportunities they have to invest in Greece.” He said he was doing his utmost to provide for a safe and business-friendly environment. Last January, Premier Netanyahu signed a strategic pact with his Greek and Cypriot counterparts.

Continuing, the Greek Head of State said that such regional cooperation is a boon for the three countries, noting that, “it bolsters and helps the already excellent relations between them. It is a framework that is based on regional prosperity and peace, while creating a pillar of stability in an unstable environment.” He insisted that “this is not designed against a third party,” clarifying that “we will agree to add more parties who would like to advance regional cooperation.”

When the conversation turned to energy cooperation, President Pavlopoulos stressed that Greece’s location has made it a maritime crossroads that connects the Middle East and Europe. “An underwater natural gas pipeline from the Israeli gas fields, through Cyprus to Greece, will serve as a convenient commercial bridge to Europe,” he explained. Greece’s geography has drawbacks as well. It has been overwhelmed by the flow of migrants from Syria, Iraq and African countries, numbering hundreds of thousands. Some use it as a stopover en route to central Europe. “75-80% of the migrants have fled from conflict zones,” he said. “We do a lot to save lives; last year, the Greek coast guard saved some 150,000 women, children and men.”

Greece has also had to grapple with a major economic crisis and only recently has it begun to recover. “We are already engaged in a constructive dialogue with our partners and the EU to fully implement the first stabilisation programme. Our goal is to meet our obligations while maintaining social cohesion,” he said.

The President also praised the strong ties with Israel’s tourism industry. “Israelis have proven their loyalty over the years by visiting Greece again and again,” he said. “We feel the love and appreciation between the two peoples, which is based, in part, on a shared history, culture, the arts and music.”

Main photos: President of the State of Israel, Reuven Rivlin grants an Official Ceremony to welcome his visiting Greek counterpart, Prokopis Pavlopoulos; the Greek Head of State pays his respects by laying a wreath in the Hall of Remembrance at the Yad Vashem Holocaust Museum in Jerusalem. President Rivlin declares his Greek counterpart a ‘true friend of Israel’ during joint statements to the press.  President Pavlopoulos is welcomed by Prime Minister Benjamin Netanyahu and Speaker of the Knesset Yuli-Yoel Edelstein.