A flame is lit, a hope for peace is born 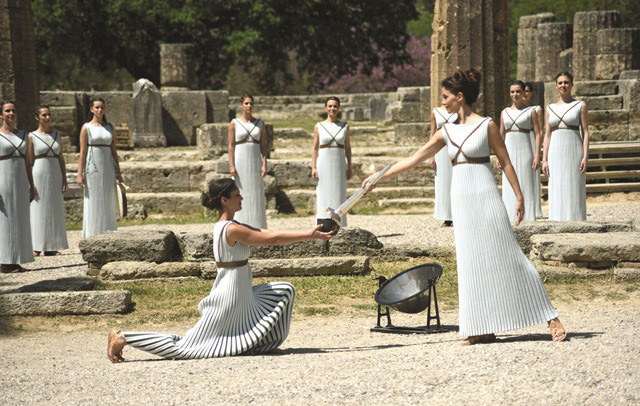 On April 21st, all eyes were on Olympia in Greece, site of the ancient Games, when an imaginative ceremony saw the Olympic torch lit in front of the Temple of the Goddess Hera – beginning the long-awaited Greek section of the Rio 2016 Torch Relay.

A flame is lit, a message is sent, a hope for world peace is born. From the Ancient Olympia, humanity is called to redefine its universal values. The ceremony was attended by Greek President Prokopis Pavlopoulos, International Olympic Committee (IOC) Chief Thomas Bach and other officials, marking the beginning of the torch relay that will end up in Rio de Janeiro, Brazil, for the 31st Olympic Games to be held from 5th-21st August 2016.

During the ceremony, actress Katerina Lehou, in the role of high priestess, lit the flame from the sun’s rays and Greece once again sent the message and kept alive the international hope for peace and solidarity. She was supported by a retinue of priestesses who joined her in a procession to the ancient stadium – where the group was joined by a group of male dancers and an Ancient Greek-inspired choreography was performed. World champion in artistic gymnastics, Lefteris Petrounias, was chosen as the first torchbearer of the Olympic Torch Relay. 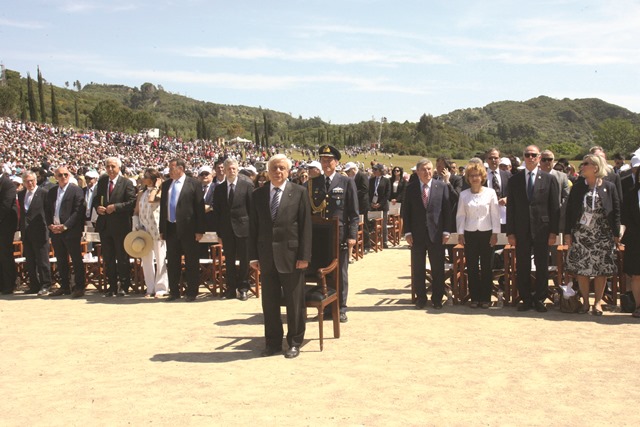 “In the holy land of Ancient Olympia, the land where the Ancient Greek Spirit gave birth to the immortal Olympic Spirit and its ideals, the Olympic Flame is lit. With thousands of modern phryctorias, that each runner and each torch symbolise, the flame will reach its final destination, Rio de Janeiro. The Olympic Flame, a symbol of the Olympic Spirit, must stay genuine throughout this long journey, and beyond. The institution of the Olympic Games and the history of the Games require so. But this is even more critical at the current time, perhaps more than ever,” President Pavlopoulos underlined.

The Greek President noted that in 2016 humanity is faced with two extremely threatening issues. “First,” he said, “it is the deep global economic crisis which is turning into a deep social crisis while widening inequalities and affecting the core of the welfare state. Secondly, it is the refugee crisis, which has taken the dimensions of a real humanitarian crisis. And it may only concern the Middle East and Europe for the time being, but its impact and its ‘corrosive’ prospects are being globalised,” he added. 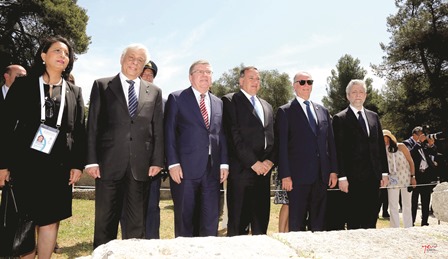 “Therefore, the 2016 Olympic Flame acquires a double and significant symbolism,” he stressed. “First, its continuous light must constitute a hope for peace, which will enlighten the heavy darkness of war and a new kind of barbarism in the form of terrorism which attempts to revive the nightmare of crimes against humanity. Terrorism, which, for this very reason attacks the culture and the democracy. Secondly, the Olympic Flame, especially at these critical times, should become on a global scale, the purgatory of the collective consciousness of every civilised people, reminding of its historic responsibility for the inalienable duty to defend man, its values and the free development of his personality in any field – political, economic and social – based on real solidarity and justice.” 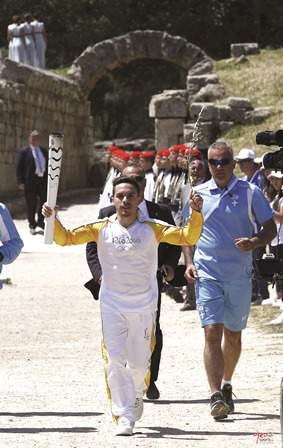 On his part, the IOC Chief Thomas Bach said: “It was on this exact spot where the first Olympic Games were held and the unique gift of the Greeks to humankind was born. We are grateful to Greece and the Greeks for that great gift to humanity and the human values.” Referring to the 31st Olympic Games, Mr. Bach said: “We are reminded of the power of sports to bring people together in peace. The Olympic Games are a message of hope and peace. It is one of the moments that the past and the future of humanity connect.”

The flame will be handed over to Rio 2016 on April 27th, after which it will visit the Olympic Museum in Lausanne and the United Nations headquarters in Geneva. The flame will arrive in Brasilia on May 3rd where the 2016 torch relay will begin. Roughly 12,000 athletes will carry the torch, taking it through 83 cities and 500 towns, reaching about 90% of the country’s population.

New Olympic Laurel Award
On April 12th, the President of the Hellenic Republic was welcomed by the IOC President in Lausanne where they both praised the eternal Olympic values and Greece’s role in the Ancient and Modern Olympic Games, including the Ekecheiria, or Olympic Truce. 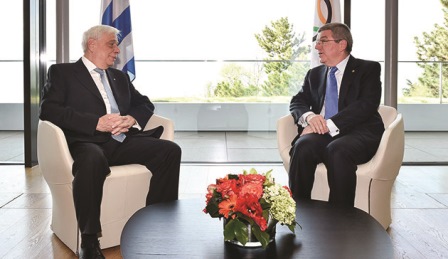 “In our fragile world, in these times of crisis and conflict, the values of peace and solidarity are more important than ever,” said Mr. Bach during their meeting. President Pavlopoulos welcomed the initiatives being taken by the IOC with regard to refugees and to the creation of a Refugee Olympic Athletes’ team for the Olympic Games in Rio. The Greek Head of State said that refugees needed to be treated “honestly and efficiently, with humanism, as well as with genuine solidarity.”

The Greek President also sent a strong message “on the need to end as soon as possible all conflicts around the world” and to “end the war in Syria,” because only this can guarantee the resolution of the refugee issue. “This is why we consider important the revival of the Olympic Truce,” he noted. 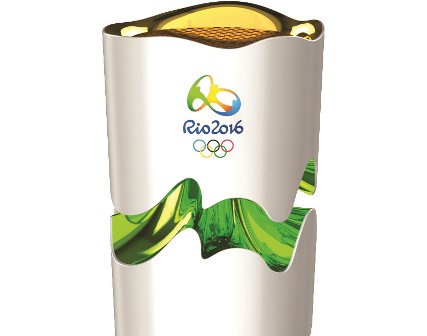 The Olympic Truce for the Games of the XXXI Olympiad in Rio de Janeiro was supported by 180 out of 193 United Nations member states at the 70th Session of the UN General Assembly in October 2015. President Pavlopoulos added: “The timing of this visit is doubly symbolic. Firstly, because this is an Olympic Games year. Secondly, because 2016 is marked by a vast crisis of global proportions, which is creating a veritable humanitarian crisis from all points of view, especially with regard to the major issue of refugees. It is precisely these circumstances which make the Olympic ideals more relevant and indispensable than ever; ideals originating in the country that was the cradle of the Olympic Games and the birthplace of the Olympic Spirit.”

Also on the agenda was the creation of the Olympic Laurel Award that will be awarded at the Opening Ceremony of every Olympic Games. The new award will honour outstanding individuals in education, culture, development and peace through sport.

“With the Olympic Laurel we are reconnecting with the ideals and values of the Ancient Olympic Games,” said Mr. Bach. “This is why we are so pleased to receive the stone for the award from Ancient Olympia. With its focus on human development through peace and sport, the Olympic Laurel Award will connect the Modern Games to the Spirit of the Ancient Games, in accordance with to the vision of Baron Pierre de Coubertin, founder and renovator of the Modern Olympic Games.”

Pictured from above: Acting as high priestess, actress Katerina Lehou lights a pot with the Olympic Flame during a spectacular ceremony held on the site of Ancient Olympia in western Greece. President Prokopis Pavlopoulos, joined by Brazilian and Greek officials, heads the ceremonies; pictured in the International Olympic Committee (IOC) heaquarters in Lausanne with Thomas Bach; world artistic gymnastics champion Lefteris Petrounias is chosen as the first torchbearer of the Olympic Torch Relay.