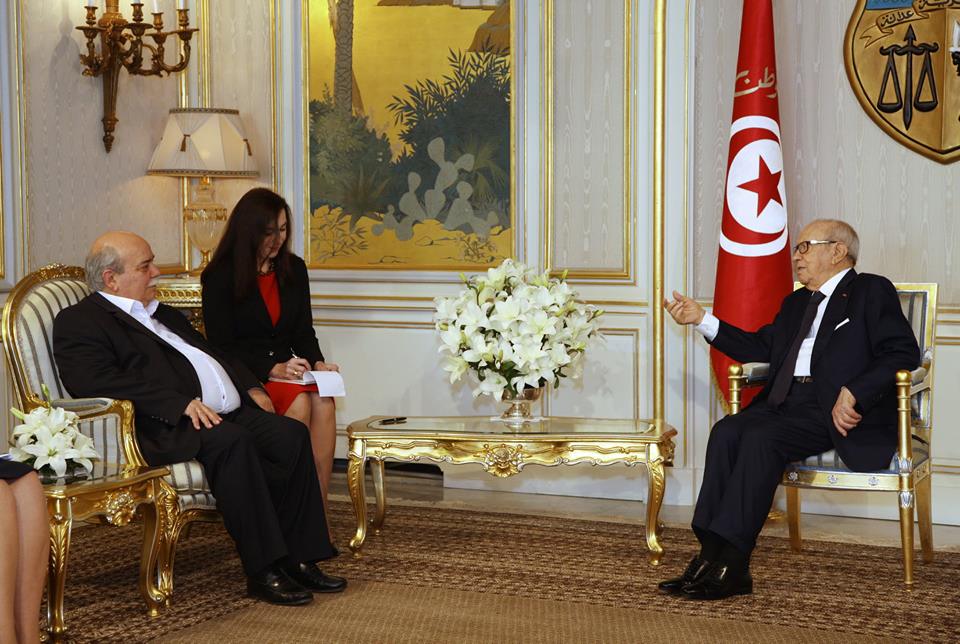 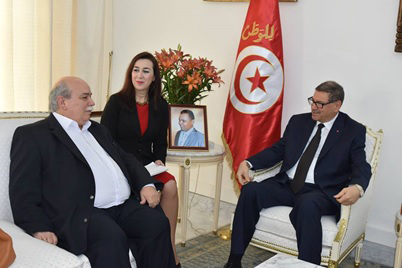 From March 17th-19th, Speaker of the Hellenic Parliament Nikos Voutsis made an Official Visit to Tunisia at the invitation of Speaker of the House of the People’s Representatives (HPR) Mohamed Ennaceur. The visit reflects the “excellent bilateral relations” between Tunisia and Greece said a statement from the Embassy of Greece in Tunis. During his visit, Mr. Voutsis was received individually by President Beji Caid Essebsi (pictured above left), Prime Minister Habib Essid and his counterpart.

Alongside the Tunisian Head of State and Prime Minister, Mr. Voutsis also met with political leaders, as well as with members of the civil society. As part of his agenda, the Greek Parliament President paid a visit to the Greek Orthodox St. George Cathedral and met with members of the Greek community in Tunis. He later laid a wreath at the memorial of victims of the terrorist attack in the Bardo Museum and at the monument of Greek officers and soldiers who fell in World War II in Tunisia.

Concluding his three-day visit, Mr. Voutsis said that his talks had proven most encouraging concerning the future of bilateral cooperation, particularly Parliamentary, between the two countries, commending the quality of exchanges he had with Tunisian senior officials on issues of mutual interest. “Through this visit, I also had the opportunity to reaffirm Greece’s willingness to support Tunisia in its democratic transition process, making available to it decades-long experience in Parliamentary action and democracy,” he added.

Preparations for holding the Tunisian-Greek high joint commission next November and the issue of the increasing flow of refugees and migrants due to the generalised destabilisation of the region were also discussed in his meetings. “Greece and Europe consider that Tunisia is conducting a fierce battle to face up to the destabilisation of the region and is called to play a preponderant role in bolstering peace to reduce the problem of migration,” Mr. Voutsis underlined.